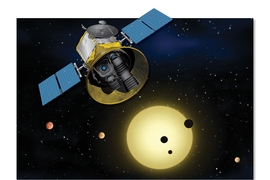 The following is adapted from a press release issued Nov. 7 by NASA's Goddard Space Flight Center.

NASA has officially confirmed the Transiting Exoplanet Survey Satellite (TESS) mission, clearing it to move forward into the development phase. This marks a significant step for the TESS mission, which would search the entire sky for planets outside our solar system, known as exoplanets.

Designed as the first all-sky survey, TESS would spend two years of an overall three-year funded science mission searching both hemispheres of the sky for nearby exoplanets. “This is an incredibly exciting time for the search of planets outside our solar system,” said Mark Sistilli, the TESS program executive from NASA Headquarters in Washington, D.C. “We got the green light to start building what is going to be a spacecraft that could change what we think we know about exoplanets.”

“During its first two years in orbit, the TESS spacecraft will concentrate its gaze on several hundred thousand specially chosen stars, looking for small dips in their light caused by orbiting planets passing between their host star and us,” said TESS principal investigator George Ricker of the Massachusetts Institute of Technology in Cambridge, Mass. During the third year, ground-based astronomical observatories would continue monitoring exoplanets identified earlier by the TESS spacecraft.

TESS is expected to find more than 5,000 exoplanet candidates, including 50 Earth-sized planets. It will also find a wide array of exoplanet types, ranging from small, rocky planets to gas giants. Some of these planets could be the right sizes, and orbit at the correct distances from their stars, to potentially support life.

“The most exciting part of the search for planets outside our solar system is the identification of ‘earthlike’ planets with rocky surfaces and liquid water as well as temperatures and atmospheric constituents that appear hospitable to life,” said TESS project manager Jeff Volosin at NASA’s Goddard Space Flight Center in Greenbelt, Md. “Although these planets are small and harder to detect from so far away, this is exactly the type of world that the TESS mission will focus on identifying.”

Now that NASA has confirmed TESS, the next step is the Critical Design Review in 2015. This would clear the mission to build the necessary flight hardware for launch.

“After spending the past year building the team and honing the design, it is incredibly exciting to be approved to move forward toward implementing NASA’s newest exoplanet hunting mission,” Volosin said.

TESS is designed to complement several other critical missions in the search for life on other planets. Once TESS finds nearby exoplanets to study and determines their sizes, ground-based observatories and other NASA missions, like the James Webb Space Telescope, would make follow-up observations on the most promising candidates to determine their density and other key properties. By figuring out a planet’s characteristics, like its atmospheric conditions, scientists could determine whether the targeted planet has a habitable environment.

“TESS should discover thousands of new exoplanets within 200 light years of Earth,” said Ricker, a senior research scientist at the MIT Kavli Institute for Astrophysics and Space Research. “Most of these will be orbiting bright stars, making them ideal targets for characterization observations with NASA’s James Webb Space Telescope.”

“The Webb telescope and other teams will focus on understanding the atmospheres and surfaces of these distant worlds, and someday, hopefully identify the first signs of life outside of our solar system,” Volosin said.

TESS will use four cameras to study sections of the sky’s northern and southern hemispheres, looking for exoplanets. The cameras would cover about 90 percent of the sky by the end of the mission. This makes TESS an ideal follow-up to the Kepler mission, which searches for exoplanets in a fixed area of the sky. Because the TESS mission surveys the entire sky, TESS is expected to find exoplanets much closer to Earth, making them easier for further study.

“This unique new data will comprise a treasure trove for astronomers throughout the world for many decades to come,” Ricker said.

Now that TESS is cleared to move into the next development stage, it can continue toward its goal of being a key part of NASA's search for life beyond Earth.

“I’m still hopeful that in my lifetime, we will discover the existence of life outside of our solar system, and I’m excited to be part of a NASA mission that serves as a key stepping stone in that search,” Volosin said.

TESS is an Explorer-class mission overseen by the Astrophysics Division at NASA Headquarters. It is being developed jointly by Massachusetts Institute of Technology, in Cambridge, Mass., and NASA Goddard. Additional partners include NASA’s Ames Research Center in Moffett Field, Calif.; the Smithsonian Astrophysical Observatory in Cambridge, Mass., and the Space Telescope Science Institute in Baltimore. More than a dozen universities and observatories worldwide are participating in the scientific planning for the mission.