An increasingly popular program is drawing students eager to build — and use — the next generation of tools for making music.
Watch Video
School of Humanities, Arts, and Social Sciences
Publication Date:
Press Inquiries

Caption:
“Our students build some tech, then use it in a creative and artistic way,” says Eran Egozy, a professor of the practice. “Music technology is the quintessential multidisciplinary field, and this kind of multimodal thinking is increasingly important as we educate tomorrow’s leaders.”
Credits:
Photo: Jon Sachs/SHASS Communications

Caption:
As a field, music technology covers a range of activities, from analyzing musical data to creating new instruments and new sounds. “What we humans can imagine is only the beginning,” says Hattwick, an artist and technology developer. “Digital composition means we can make sounds you can’t imagine. We can discover new sounds and new forms of music-making.'"
Credits:
Photo: Jon Sachs/SHASS Communications

Caption:
"Music exercises the artistic part of your brain, which encourages creativity, and that creativity can be applied to engineering and science," says Egozy. "But I think students should take classes in the humanities and arts simply because they are rich and wonderful subjects in their own right. And ultimately, the truly great things that happen in the world happen when people pursue the work they love."
Credits:
Photo: Jon Sachs/SHASS Communications

The room fills with electronic beeps and chirps, rising and falling notes generated by computer. Students are poring over their glowing laptops, trying to match frequency with pitch.

In this, as in other introductory music technology classes at MIT, the sound that fills the room is lively, if not exactly melodic. Like beginning violinists or pianists, novices to music tech need to “learn the nuances of their instruments,” says Ian Hattwick, an artist, researcher, and technology developer who teaches 21M.080 (Introduction to Music Technology). These initial electronic notes are their first steps.

A burgeoning area of study at the Institute, the field of music technology covers a range of activities, from analyzing musical data to computer-assisted composition, to building new kinds of instruments and creating new sounds. Some say the field is about being able to create any sound you can imagine — which sounds impressive enough. But as Hattwick points out, that’s not nearly a wide-enough scope to characterize this new musical zone.

“What we [humans] can imagine is only the beginning,” Hattwick says. Digital composition means “we can make sounds you can’t imagine. We can discover new sounds and new forms of music-making.” 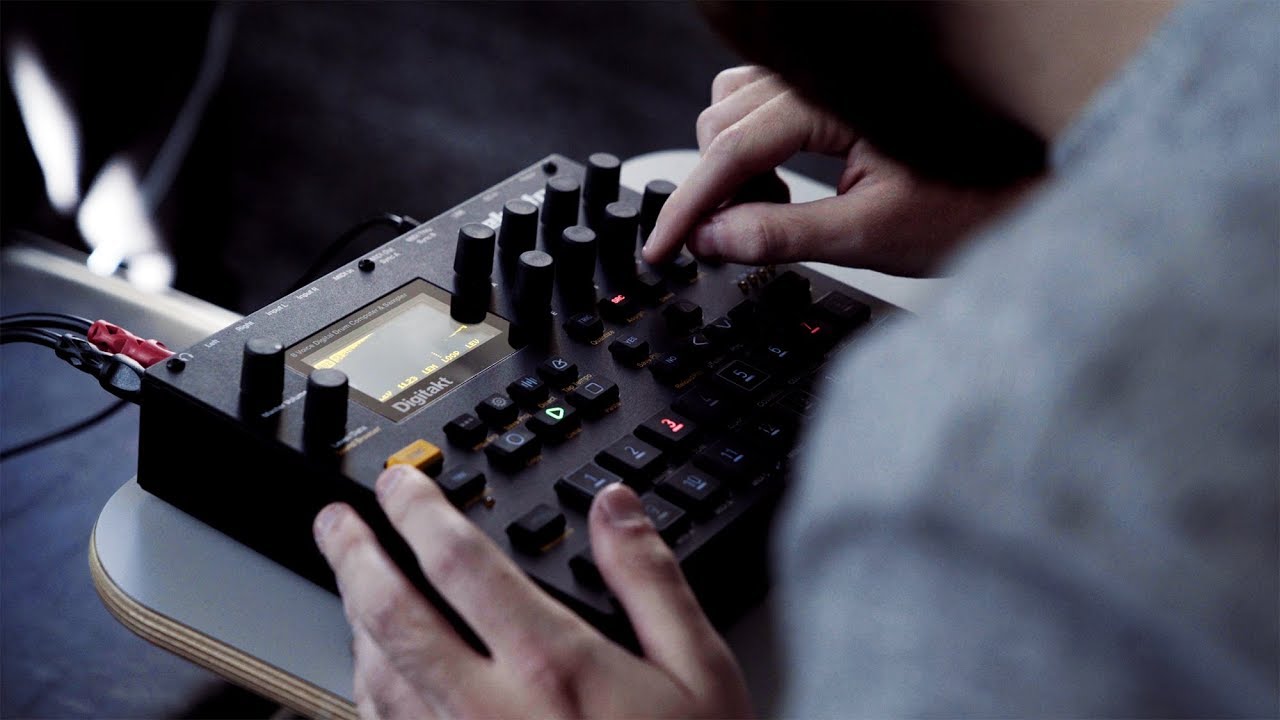 Play video
“Technology and humanity are now deeply interlinked. It’s important for people graduating with a technical or scientific degree to be immersed in the arts,” says Egozy, an engineer, musician, and new media pioneer. “MIT students are craving courses where they can use their science and engineering training and apply it to something humanistic.”

MIT’s long history of work in music technology dates back to the 1960’s and Professor Barry Vercoe’s Experimental Music Studio, which developed and improved technologies such as real-time digital synthesis, live keyboard input, and graphical score editing. Today, faculty members like Michael Cuthbert, who developed the music21 toolkit for musicology research, and Tod Machover, who directs the Opera of the Future group, continue to push the envelope of music technology research and applications.

Music21, for example, has transformed the musicology field by enabling computer-aided analysis of musical scores, thus allowing researchers to ask (and answer) questions never before possible. Another recent MIT music tech work is ConcertCue, a mobile web application developed by Eran Egozy that streams synchronized program notes during live musical performances. Tutti, which began as the work of Danielle Penny ’17, is a massively multiplayer music-making experience in which members of a large audience use their cellphones as musical instruments.

“You will find people doing music technology all over campus,” Hattwick says.

Within the MIT Music section itself, music technology has become a vibrant and growing area of study. The section's earliest music tech course, Composing with Computers, was created in 2000 by MIT composer Elena Ruehr. Lecturer Peter Whincop's 21M.361 (Electronic Music Composition) followed in 2002, and the section has gradually increased its offerings, with Whincop adding sections to 21M.361, as well as more advanced and specialized courses in the field. Egozy came on board in 2016 to accelerate this expansion and Music Technology is now one of the Music section’s four areas of curricular focus — joining Performance, Music History/Culture, and Composition/Theory.

The current classes have proved extraordinarily popular: 120 students were enrolled, and another 121 students had to be turned away because classes were full.

“Students are just extremely interested in these classes,” says Egozy, who spearheads the Music Technology program, drawing on his talent as a musician (clarinetist for the Radius Ensemble) and his expertise as the co-founder and former chief scientist of Harmonix Music Systems, which generated over $1 billion in annual sales worldwide.

Of MIT students, Egozy observes that “they are craving courses where they can use their science and engineering training and apply it to something humanistic.”

This is certainly true of Sunayana Rane, a computer science major in her third year at MIT. “If you asked me to choose between computer science and humanities, I would choose humanities in a heartbeat. What’s great about MIT computer science, and MIT as a whole, is that we are encouraged to do both,” she says.

Rane, who was taking her third class in music technology (Interactive Music Systems) this fall, says she was drawn to the field by the potential for “democratizing music.” While Rane received early training in Indian classical music, she came late to an understanding of Western music. “I didn’t know really what a chord was until high school," she says, "and I wanted to use computer science to give other people like me opportunities they wouldn’t have without the help of technology” — such as the chance to compose and play music without traditional musical training, she says.

Egozy notes that for some students classes in music technology are serving “an entry point for music study.”

Long a musical powerhouse, MIT offers both a conservatory-level program and musical instruction for beginners — a rare combination. The section’s faculty comprises leading musicians, composers, and musicologists, and students can take an enormous range of subjects across the four areas of focus.

Like study in all of MIT’s four music tracks, “Music technology provides an opportunity for students to make connections between their primary courses of study and the broader perspective of the world that the arts provides,” says Hattwick.

MIT students regularly notice that the creativity, discipline, risk-taking, and collaboration skills they gain in music courses and practice benefit their work in other fields as well.

“This class is interesting because it allows me to do two things I enjoy — working with computers and performing,” says Rupayan Neogy, a senior majoring in computer science who aims to incorporate music into his future research and career. “I find that the lessons I've learned creating musical systems are pretty applicable to the work that I do in HCI [human-computer interaction] and UI [user interface] design.”

In this regard, Neogy is representative of many of his classmates. Today, more than 70 percent of MIT students arrive on campus with advanced experience in the arts, especially in music, and many graduates continue to compose, perform, and savor music throughout their lives, often finding ways to combine a passion for music with their work in science, technology, engineering, and math.

To that end, hands-on projects are central to MIT’s music technology offerings. Early in the term, students in one class created their own virtual harps using Leap Motion technology. In another, students experimented with live coding using Gibber, a creative tool for audiovisual performance and composition. In Interactive Music Systems, the final project had to involve both audio and visual output controlled by the student in real time — an exciting challenge for many.

“Building software from the ground up to something close to what you dreamed of when you started is an incredible, exhilarating feeling,” Rane says.

Brandon Fountain, a senior majoring in computer science, says he not only enjoyed building technology in class; he also found it interesting to learn how the technology used by so many people every day works.

“The average person simply hears a synthesizer but has no idea how much math and science go into making that synthesizer sound so good,” he notes. “Professor Hattwick has been great at pulling back the curtain and giving us a peek into what happens inside of the music hardware that we know and love.”

Often, that understanding leads students to dig deeper, Egozy says. “Students want to understand from the fundamental principles so they can create the next tool and educational paradigm shift,” he says, noting that one reason he loves teaching music technology is the way the discipline combines technology and design.

“Our students build some tech, and then use it in a creative and artistic way,” he says. “Music technology is the quintessential multidisciplinary field, and this kind of multimodal thinking is increasingly important as we educate tomorrow’s leaders.”

Sharing a passion for music and interactive technology

3Q: A world-premiere concert where the audience helps play