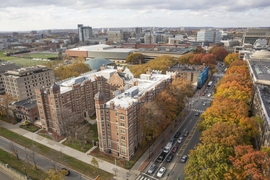 Despite a challenging year marked by a colder-than-usual winter and the construction of major new campus buildings, MIT has continued its progress toward its declared goal of reducing campus greenhouse gas emissions by 32 percent by the year 2030, as outlined in 2015 in the Institute’s Plan for Action on Climate Change.

Emissions from the campus itself actually increased slightly in fiscal year 2018 compared to the previous year, because of the weather and growth in campus energy demand, after having declined for each of the previous three years. But when the emissions reductions resulting from MIT’s power purchase agreement with a solar farm in North Carolina are taken into account, the Institute actually achieved yet another decline in net greenhouse gas emissions. The total reductions in net emissions since the plan began now have reached 20 percent — more than halfway toward the target of the 15-year plan, after just three years — according to the MIT Sustainability Office’s annual Climate Action Plan Update, which was released this week.

In addition, there has been steady progress in longer-term projects that should lead to even greater reductions over the coming years. For one, a new central utility plant began construction a year ago and is expected to be completed late next year and fully operational in spring of 2020. The 44-megawatt plant will provide all of the electricity, heating, and cooling needs of the main MIT campus, using natural gas — the cleanest of fossil fuels — and eliminate altogether the use of No. 6 fuel oil, a relatively high-emission fuel that was used occasionally in the existing campus cogeneration plant (although that usage has mostly stopped). That plant will shut down as soon as the new one is in operation.

Completion of the plant will lead to an estimated 10 percent cut in overall campus emissions, says Ken Packard, director of utilities. That will be enough to counterbalance the expected 10 percent growth that will come from the addition of several major new campus buildings, including the just-opened MIT.nano, the Kendall Square redevelopment project, and a new student residence on Vassar Street.

Other ongoing work includes installing meters for steam and electricity in many of the older campus buildings that don’t currently have a way of measuring building-level energy use. This improved metering, along with other measures, should lead to steady improvements in building operations to enhance energy efficiency, including allowing for the use of machine-learning systems to control building energy use and to optimize the systems.

Just 20 out of the 145 buildings on campus account for approximately half of all campus energy usage, explains Carlo Fanone, director of facilities engineering. These are mostly lab buildings whose energy-use intensity is much greater than office, classroom, or dorm buildings, he says. So, much focus is on improving the efficiency of those buildings. “If we can save 10 percent at each of the 20 buildings, that’s a 5 percent improvement across the entire campus,” he says.

Meanwhile, the Summit Farms solar installation in North Carolina, whose construction was made possible through a power purchase agreement arranged by MIT in collaboration with two other organizations, came fully online this past year, providing a 71 percent increase in offset emissions compared to the previous year. Overall, the facility produced more than 88,700 megawatt-hours of emissions-free electricity for MIT in fiscal 2018, thus offsetting more than 33,000 metric tons of carbon dioxide emissions. The results also highlight the resilience of the solar farm, which survived the onslaught of hurricanes Florence and Michael unscathed, even though some conventional power plants were seriously damaged by the storm.

In fact, the impact of that power purchase agreement is far greater than those numbers suggest, explains Joe Higgins, director of infrastructure operations in the Department of Facilities. First, the standard way of calculating offset emissions uses the local grid in Massachusetts rather than the one in North Carolina as a point of reference — even though the emissions that are actually being displaced are those of the much more coal-dependent southern grid. An alternative approach that calculates the actual mix of generating facilities in use in that region, hour by hour, shows that the real effect of the plant in offsetting greenhouse gas emissions is two to three times greater than that calculated by the standard methodology. MIT is working with several other institutions to explore developing a new approach for measuring such offset emissions.

If measured according to this newer approach, looking at the emissions that were actually avoided would mean that MIT’s target of a 32 percent emissions reduction (which is considered a minimum) would already have been reached, Higgins says. And, more importantly, having the right metrics will enable institutions like MIT to gauge which projects are having the greatest impact on reducing emissions.

The power purchase agreement has also had another major impact, he says: The way the project was developed — by combining the power needs of different organizations into one package to allow for a larger project than any one organization could take on alone — has inspired other universities, companies, and cities to initiate or investigate similar collaborative purchase agreements, leading to still more large-scale projects. At the same time, MIT continues to explore the possibility of collaborating on similar large power-purchase agreements, possibly involving other local institutions and city governments. An additional benefit of the solar power facility is that it enabled the early retirement of a regional coal-fired power plant as the solar plant assumed some of the retiring plant’s power capacity obligations.

All of the new buildings being erected around campus will be designed to at least meet the latest U.S. Green Building Council’s Leadership in Energy and Environmental Design (LEED) Gold certification for energy efficiency, and in some cases are expected to go beyond those standards.

As they did last year, Office of Sustainability Director Julie Newman and professor of mechanical engineering Timothy Gutowski will teach 11.S938 / 2.S999 (Solving for Carbon Neutrality at MIT) in the spring semester. Teams of students are challenged to develop a rigorous plan for carbon neutrality using the MIT campus as their case example for considering a range of solutions, including energy efficiency in old buildings, emerging high-performance design strategies, and off-site large scale renewable energy production models. The course, Newman says, “gives students a real opportunity to be exposed to and grapple with and come up with solutions for this complex challenge of how to solve for neutrality, considering both local and global emissions.” Last year’s version of the class resulted in four peer-reviewed research papers and some innovations that are being explored for possible future adoption on campus.

“We’re working hard to integrate energy efficiency technology into an old campus in the midst of renewal,” Newman says. “But we concurrently grapple with growth and advancing the mission of MIT. We’re always going to ensure that we’re going with the best system to accomplish our mission — while also attempting to be a leader.”