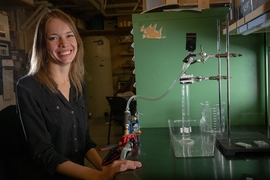 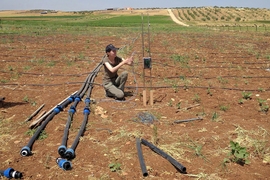 Julia Sokol grew up far away from any farm. Born in Russia, Sokol and her family moved when she was 10 years old to New York City, where her father worked for the United Nations. These days, however, Sokol, a PhD student in mechanical engineering, spends a lot of her time thinking about agriculture. For the past two years, Sokol has been working on a drip irrigation project at MIT’s Global Engineering and Research (GEAR) Lab.

After receiving her bachelor’s in mechanical engineering at Harvard University, Sokol spent some time in industry, first as a research assistant at Schlumberger, then working at a small sustainability consulting firm. Wanting a stronger technical foundation, she applied to MIT for graduate school.

During her master’s program, Sokol took course 2.76 (Global Engineering), which was taught by associate professor and principal investigator of the GEAR Lab, Amos Winter. Having developed an interest in water-related issues, Sokol jumped at the opportunity to work with Winter on the GEAR Lab’s energy efficient drip irrigation project.

“I was really excited to join the project,” says Sokol. “It perfectly combines my passion for sustainability with my interest in fundamental research in fluid mechanics and system design.”

Rather than flood irrigation — in which water is pumped from a source to flood a field —  drip irrigation has a central pump that moves water through a network of pipes. Emitters attached to the pipes release water uniformly throughout the field, resulting in higher crop yield and less water consumption when compared to flood irrigation.

“The goal of drip irrigation is to provide water at a low enough flow rate for the roots to actually start absorbing it immediately, instead of it evaporating or percolating back down to an aquifer,” explains Sokol.

The emitters used in drip irrigation disperse water evenly, as opposed to flood irrigation, which often causes crops to get water-logged. “These drip emitters need to provide a uniform flow rate throughout the field so all crops get the same amount of water,” adds Susan Amrose, a research scientist at the GEAR Lab.

Commercial emitters require minimum activation pressure of 1 bar to provide a constant flow rate for the crops. Thanks to the changes the team made inside the emitter, they lowered the activation pressure to just 0.15 bar. This reduction in the pressure needed to activate the drippers cut the power needed to operate the central pump in half.

“Reducing the pressure lowers the cost of the system overall, which is beneficial to the farmer, and of course it also helps reduce greenhouse gas emissions,” says Sokol.

For off-grid drip irrigation systems that operate via solar power, the use of the new emitters could reduce costs to the farmer by 40 percent. “For farmers in developing countries, this cost savings reduces the barrier to a water conserving and yield increasing technology,” adds Amrose.

The team has conducted a number of field trials in Morocco and Jordan, where they work with NGO partners and private farmers to test the newly designed emitters and optimized irrigation system.

“The biggest takeaway from these field trials was how much our system reduced energy and cost while providing high uniformity of flow rate to crops,” explains Sokol.

According to Amrose, Sokol has been instrumental in the development and testing of these emitters. “She brings the whole package — she is an excellent designer, she can be in the field fixing hardware, and she is also incredibly good theoretically, working with models,” Amrose says.

Sokol and the GEAR Lab team will continue to make improvements to the design of the emitters that both reduce costs, conserve resources, and improve crop yield. Their research is funded by Jain Irrigation Systems and USAID.

The future of food production amid global change