How Earth sheds heat into space 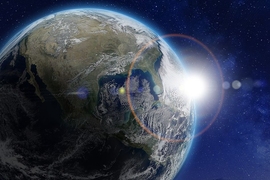 ↓ Download Image
Caption: Since the 1950s, scientists have observed a surprisingly straightforward, linear relationship between the Earth’s surface temperature and its outgoing heat.

Caption:
Since the 1950s, scientists have observed a surprisingly straightforward, linear relationship between the Earth’s surface temperature and its outgoing heat.

Just as an oven gives off more heat to the surrounding kitchen as its internal temperature rises, the Earth sheds more heat into space as its surface warms up. Since the 1950s, scientists have observed a surprisingly straightforward, linear relationship between the Earth’s surface temperature and its outgoing heat.

But the Earth is an incredibly messy system, with many complicated, interacting parts that can affect this process. Scientists have thus found it difficult to explain why this relationship between surface temperature and outgoing heat is so simple and linear. Finding an explanation could help climate scientists model the effects of climate change.

Now scientists from MIT’s Department of Earth, Atmospheric and Planetary Sciences (EAPS) have found the answer, along with a prediction for when this linear relationship will break down.

They observed that Earth emits heat to space from the planet’s surface as well as from the atmosphere. As both heat up, say by the addition of carbon dioxide, the air holds more water vapor, which in turn acts to trap more heat in the atmosphere. This strengthening of Earth’s greenhouse effect is known as water vapor feedback. Crucially, the team found that the water vapor feedback is just sufficient to cancel out the rate at which the warmer atmosphere emits more heat into space.

The overall change in Earth’s emitted heat thus only depends on the surface. In turn, the emission of heat from Earth’s surface to space is a simple function of temperature, leading to to the observed linear relationship.

Their findings, which appear this week in the Proceedings of the National Academy of Sciences, may also help to explain how extreme, hothouse climates in Earth’s ancient past unfolded. The paper’s co-authors are EAPS postdoc Daniel Koll and Tim Cronin, the Kerr-McGee Career Development Assistant Professor in EAPS.

A window for heat

In their search for an explanation, the team built a radiation code — essentially, a model of the Earth and how it emits heat, or infrared radiation, into space. The code simulates the Earth as a vertical column, starting from the ground, up through the atmosphere, and finally into space. Koll can input a surface temperature into the column, and the code calculates the amount of radiation that escapes through the entire column and into space.

“So the radiation code gave us what Earth actually does,” Koll says. “Then I started digging into this code, which is a lump of physics smashed together, to see which of these physics is actually responsible for this relationship.”

To do this, the team programmed into their code various effects in the atmosphere, such as convection, and humidity, or water vapor, and turned these knobs up and down to see how they in turn would affect the Earth’s outgoing infrared radiation.

“We needed to break up the whole spectrum of infrared radiation into about 350,000 spectral intervals, because not all infrared is equal,” Koll says.

He explains that, while water vapor does absorb heat, or infrared radiation, it doesn’t absorb it indiscriminately, but at wavelengths that are incredibly specific, so much so that the team had to split the infrared spectrum into 350,000 wavelengths just to see exactly which wavelengths were absorbed by water vapor.

In the end, the researchers observed that as the Earth’s surface temperature gets hotter, it essentially wants to shed more heat into space. But at the same time, water vapor builds up, and acts to absorb and trap heat at certain wavelengths, creating a greenhouse effect that prevents a fraction of heat from escaping.

“It’s like there’s a window, through which a river of radiation can flow to space,” Koll says. “The river flows faster and faster as you make things hotter, but the window gets smaller, because the greenhouse effect is trapping a lot of that radiation and preventing it from escaping.”

Koll says this greenhouse effect explains why the heat that does escape into space is directly related to the surface temperature, as the increase in heat emitted by the atmosphere is cancelled out by the increased absorption from water vapor.

The team found this linear relationship breaks down when Earth’s global average surface temperatures go much beyond 300 K, or 80 F. In such a scenario, it would be much more difficult for the Earth to shed heat at roughly the same rate as its surface warms. For now, that number is hovering around 285 K, or 53 F.

“It means we’re still good now, but if the Earth becomes much hotter, then we could be in for a nonlinear world, where stuff could get much more complicated,” Koll says.

To give an idea of what such a nonlinear world might look like, he invokes Venus — a planet that many scientists believe started out as a world similar to Earth, though much closer to the sun.

“Some time in the past, we think its atmosphere had a lot of water vapor, and the greenhouse effect would’ve become so strong that this window region closed off, and nothing could get out anymore, and then you get runaway heating,” Koll says. “In which case the whole planet gets so hot that oceans start to boil off, nasty things start to happen, and you transform from an Earth-like world to what Venus is today.”

For Earth, Koll calculates that such a runaway effect wouldn’t kick in until global average temperatures reach about 340 K, or 152 F. Global warming alone is insufficient to cause such warming, but other climatic changes, such as Earth’s warming over billions of years due to the sun’s natural evolution, could push Earth towards this limit, “at which point, we would turn into Venus.”

Koll says the team’s results may help to improve climate model predictions. They also may be useful in understanding how ancient hot climates on Earth unfolded.

“If you were living on Earth 60 million years ago, it was a much hotter, wacky world, with no ice at the pole caps, and palm trees and crocodiles in what’s now Wyoming,” Koll says. “One of the things we show is, once you push to really hot climates like that, which we know happened in the past, things get much more complicated.”

This research was funded, in part, by the National Science Foundation, and the James S. McDonnell Foundation.

A primer for understanding climate science