Study suggests glaucoma may be an autoimmune disease 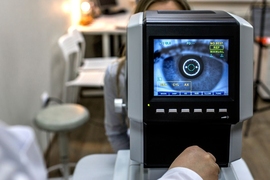 ↓ Download Image
Caption: A new study from MIT and Massachusetts Eye and Ear has found that glaucoma may in fact be an autoimmune disorder.

Caption:
A new study from MIT and Massachusetts Eye and Ear has found that glaucoma may in fact be an autoimmune disorder.

Glaucoma, a disease that afflicts nearly 70 million people worldwide, is something of a mystery despite its prevalence. Little is known about the origins of the disease, which damages the retina and optic nerve and can lead to blindness.

A new study from MIT and Massachusetts Eye and Ear has found that glaucoma may in fact be an autoimmune disorder. In a study of mice, the researchers showed that the body’s own T cells are responsible for the progressive retinal degeneration seen in glaucoma. Furthermore, these T cells appear to be primed to attack retinal neurons as the result of previous interactions with bacteria that normally live in our body.

The discovery suggests that it could be possible to develop new treatments for glaucoma by blocking this autoimmune activity, the researchers say.

“This opens a new approach to prevent and treat glaucoma,” says Jianzhu Chen, an MIT professor of biology, a member of MIT’s Koch Institute for Integrative Cancer Research, and one of the senior authors of the study, which appears in Nature Communications on Aug. 10.

One of the biggest risk factors for glaucoma is elevated pressure in the eye, which often occurs as people age and the ducts that allow fluid to drain from the eye become blocked. The disease often goes undetected at first; patients may not realize they have the disease until half of their retinal ganglion cells have been lost.

“That led us to the thought that this pressure change must be triggering something progressive, and the first thing that came to mind is that it has to be an immune response,” she says.

To test that hypothesis, the researchers looked for immune cells in the retinas of these mice and found that indeed, T cells were there. This is unusual because T cells are normally blocked from entering the retina, by a tight layer of cells called the blood-retina barrier, to suppress inflammation of the eye. The researchers found that when intraocular pressure goes up, T cells are somehow able to get through this barrier and into the retina.

The Mass Eye and Ear team then enlisted Jianzhu Chen, an immunologist, to further investigate what role these T cells might be playing in glaucoma. The researchers generated high intraocular pressure in mice that lack T cells and found that while this pressure induced only a small amount of damage to the retina, the disease did not progress any further after eye pressure returned to normal.

To test this hypothesis, the team brought in James Fox, a professor in MIT’s Department of Biological Engineering and Division of Comparative Medicine, whose team maintains mice with no bacteria. The researchers found that when they tried to induce glaucoma in these germ-free mice, the mice did not develop the disease.

The researchers then turned to human patients with glaucoma and found that these patients had five times the normal level of T cells specific to heat shock proteins, suggesting that the same phenomenon may also contribute to the disease in humans. The researchers’ studies thus far suggest that the effect is not specific to a particular strain of bacteria; rather, exposure to a combination of bacteria can generate T cells that target heat shock proteins.

One question the researchers plan to study further is whether other components of the immune system may be involved in the autoimmune process that gives rise to glaucoma. They are also investigating the possibility that this phenomenon may underlie other neurodegenerative disorders, and looking for ways to treat such disorders by blocking the autoimmune response.

“What we learn from the eye can be applied to the brain diseases, and may eventually help develop new methods of treatment and diagnosis,” Dong Feng Chen says.

STAT reporter Orly Nadell Farber writes about a new study by MIT researchers that shows glaucoma might be caused by T-cells, an integral component of the human body’s immune system, attacking retinal cells. Farber explains that, “this discovery could unlock a critical new door for treatment options.”

A new study by MIT researchers provides evidence that glaucoma may be caused by an autoimmune disease, according to a HealthDay News piece published by UPI. “Further research will try to determine whether other parts of the immune system play a role in glaucoma, and whether autoimmunity is a factor in degenerative brain diseases.”