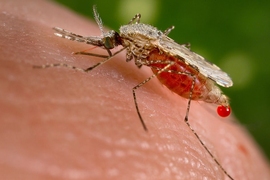 Credits:
image: Centers for Disease Control and Prevention
The parasites that cause malaria are exquisitely adapted to the various hosts they infect — so studying the disease in mice doesn’t necessarily reveal information that could lead to drugs effective against human disease.

Now, a team led by MIT researchers has developed a strain of mice that mimics many of the features of the human immune system and can be infected with the most common human form of the malaria parasite, known as Plasmodium falciparum. Using this strain, the researchers have already identified a key host defense mechanism, and they believe it should lead to many more useful discoveries.

“Human malaria studies have been hampered by a lack of animal models,” says Jianzhu Chen, the Ivan R. Cottrell Professor of Immunology, a member of MIT’s Koch Institute for Integrative Cancer Research, and the lead principal investigator of the Infectious Disease Interdisciplinary Research Group at the Singapore-MIT Alliance for Research and Technology (SMART). “This paves the way to start dissecting how the host human immune system interacts with the pathogen.”

Chen is one of the senior authors of a paper describing the findings in this week’s Proceedings of the National Academy of Sciences, along with Ming Dao, a principal research scientist in MIT’s Department of Materials Science and Engineering (DMSE); Subra Suresh, president of Carnegie Mellon University (and a former MIT dean of engineering and the Vannevar Bush Professor Emeritus of Engineering); and Peter Preiser, a professor at Nanyang Technology University in Singapore.

Plasmodium falciparum, a parasite carried by mosquitoes, usually infects the liver and red blood cells of its victims. Scientists hoping to study malaria in mice have previously generated mice with human red blood cells — but these mice also have compromised immune systems, so they can’t be used to study the immune response to malaria infection.

The humanized mouse project described in the new PNAS study grew out of an interdisciplinary program Suresh initiated in 2003 involving researchers from MIT, several institutions in Singapore, and the Institut Pasteur in France to study the mechanobiology of human red blood cells invaded by malaria parasites and its consequences for the pathogenesis of malaria. In 2007, Chen, Suresh, Dao, and Preiser established a collaboration, through SMART, to develop a humanized mouse model for malaria.

Over the past several years, Chen and colleagues have developed strains of mice that have the human cells necessary for a comprehensive immune response. To generate these cells, the researchers deliver human hematopoietic stem cells, along with cytokines that help them mature into B and T cells, natural killer (NK) cells, and macrophages — all critical components of the immune system. These mice have already proven useful to study other diseases, such as dengue fever.

To adapt the mice for the study of malaria, the researchers injected them with human red blood cells every day for a week, at which point 25 percent of their red blood cells were human — enough for the malaria parasite to cause an infection.

In the new PNAS paper, the researchers investigated the role of NK cells and macrophages during the first two days of malaria infection. They found that eliminating macrophages had very little impact on the immune response during those early stages. However, in mice lacking NK cells, parasite levels went up sevenfold, suggesting that NK cells are critical to controlling infection early on.

To further investigate the role of NK cells, the researchers placed human NK cells in a sample of infected and uninfected red blood cells. The NK cells randomly interacted with both types of cells, but they latched onto infected cells much longer, eventually killing them.

This indicates that NK cells may provide an important immune defense against malaria, says Lewis Lanier, a professor of microbiology and immunology at the University of California at San Francisco. “These findings will prompt future studies in infected humans and suggest that augmenting NK cell function might provide a new therapeutic strategy for malaria,” says Lanier, who was not part of the research team.

The researchers also identified a cell adhesion protein called LFA-1 that helps NK cells bind to red blood cells. They are now studying this process in more detail and trying to figure out what other molecules, including those produced by the malaria parasite, might be involved.

Chen and colleagues also hope to use these mice to study experimental malaria vaccines or drugs. And in another future study, they plan to inject the mice with human red blood cells from people with sickle cell anemia to investigate how the sickle-shaped red blood cells help people survive malaria infection.

The research was funded by the National Research Foundation Singapore through SMART’s Interdisciplinary Research Group in Infectious Disease.