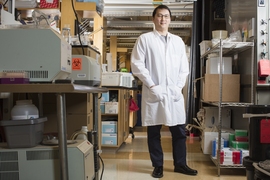 Caption:
Timothy Lu's early interest in computer programming was inspired by his father, who worked as an electrical engineer at IBM.
Credits:
Image: M. Scott Brauer

In high school and college, Timothy Lu spent a lot of time programming computers. But as his college graduation approached, he turned his attention toward programming biological systems. The field of synthetic biology was just beginning to emerge, and he wanted to be part of it.

Since that time, Lu has devoted his career to coming up with novel ways to engineer cells, both bacterial and human, to perform new functions. Using this approach, he hopes to develop new therapies for a range of diseases, from cancer to drug-resistant infections.

Achieving this goal requires overcoming many more challenges than programming computer chips does, he says, because living cells behave in more unpredictable ways and the underlying programming language is not deeply understood.

“The advantage of the semiconductor industry is they were able to build individual units and put them together and scale them very efficiently. They weren’t putting things into an existing system that was already messy and where you didn’t know the wiring diagram,” says Lu, who recently earned tenure in MIT’s Department of Electrical Engineering and Computer Science. “In contrast, we’re simultaneously trying to figure out how to assemble genetic circuits together and also stick it into this giant mish-mash of what the cell normally does. That’s the key challenge.”

Lu’s early interest in computer programming was inspired by his father, who worked as an electrical engineer at IBM.

“My dad brought home some of the early PCs that they were building at IBM, and I spent a lot of time programming computers and making them do very simple things,” Lu recalls.

When Lu was 10 years old, his family moved from upstate New York to Taiwan, where his parents had grown up. He returned to the United States to attend MIT, where he majored in electrical engineering and computer science. When he graduated in 2003, Lu realized that he enjoyed programming but wanted to apply this interest to nascent technologies with fundamental challenges that had yet to be solved.

He soon became intrigued by the idea of programming biological systems. Many Boston-area researchers were beginning to work in this field, known as synthetic biology. Lu decided to apply to the Harvard-MIT Program in Health Sciences and Technology (HST), and he arranged to do his PhD research in a lab at Boston University headed by synthetic biology pioneer James Collins (who is now a faculty member at MIT).

As part of his HST coursework, Lu saw many patients with antibiotic-resistant infections and became interested in trying to develop new treatments for such infections. In Collins’ lab, Lu worked on engineering viruses that infect bacteria, also known as bacteriophages. He engineered these bacteriophages to produce enzymes that help to chew up biofilms (layers of bacteria that stick to surfaces), and in 2008, he won the Lemelson-MIT Student Prize for this work. In a related project, he engineered bacteria to express factors that make them more susceptible to existing antibiotics.

After finishing his PhD, and an MD as well, Lu pondered a few career paths, including practicing medicine or working at a startup based on his research, but he ended up applying for a faculty position in MIT’s Department of Electrical Engineering and Computer Science, which was looking for someone interested in programming biological circuits. MIT had recently hired a couple of prominent synthetic biologists to launch the Institute’s new Synthetic Biology Center, and Lu was eager to get involved.

“At the time, MIT was trying to build up its synthetic biology team. I knew if I joined I would be the most junior member but would be part of something that was going to quickly grow, so it was exciting for me,” says Lu, who later received a joint appointment in MIT’s Department of Biological Engineering.

Much of Lu’s research focuses on designing genetic circuits that can perform computations in living cells, such as counting events or tracking whether a specific event has occurred and then provoking the appropriate response.

“My deepest personal interest is in the clinical applications of synthetic biology,” Lu says. “Can you program cells or viruses to sense and respond to their environment, so that you can try to detect the presence of disease and treat it effectively and safely?”

In a recent study, Lu and his colleagues developed a synthetic gene circuit that triggers the body’s immune system to attack cancers when it detects signs of the disease. They are also working on designing more control elements to help them turn such circuits on and off, and developing ways to help circuits change their output in response to different disease biomarkers.

Lu’s lab also continues to pursue novel antimicrobial treatments, including engineered bacteriophages as well as new types of antimicrobial peptides. By modifying these naturally occurring proteins, Lu hopes to make them more efficient at killing microbes, and potentially to develop them for use against infection in humans.

“When we first started, in the early 2000s, people didn’t care about antibiotic resistance that much. Most antibiotics were still working and people didn’t think it was a big deal,” he says. “But over time, resistance has continued to grow, and the antibiotic pipeline has become drier and drier. So we still firmly believe that we need new strategies. The days when you would just go and dig in the dirt and easily find new antibiotics with broad-spectrum activity are over.”