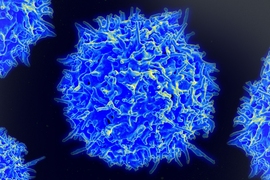 ↓ Download Image
Caption: A scanning electron micrograph of a human T lymphocyte (also called a T-cell) from the immune system of a healthy donor. Researchers have designed a synthetic gene circuit that triggers the immune system to attack cancers when it detects signs of the disease. 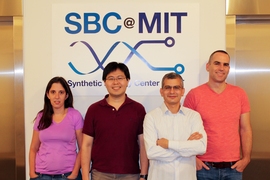 Caption:
A scanning electron micrograph of a human T lymphocyte (also called a T-cell) from the immune system of a healthy donor. Researchers have designed a synthetic gene circuit that triggers the immune system to attack cancers when it detects signs of the disease.

Researchers at MIT have developed a synthetic gene circuit that triggers the body’s immune system to attack cancers when it detects signs of the disease.

The circuit, which will only activate a therapeutic response when it detects two specific cancer markers, is described in a paper published today in the journal Cell.

Immunotherapy is widely seen as having considerable potential in the fight against a range of cancers. The approach has been demonstrated successfully in several recent clinical trials, according to Timothy Lu, associate professor of biological engineering and of electrical engineering and computer science at MIT and a member of MIT's Koch Institute for Integrative Cancer Research.

“There has been a lot of clinical data recently suggesting that if you can stimulate the immune system in the right way you can get it to recognize cancer,” says Lu, who is head of the Synthetic Biology Group in MIT’s Research Laboratory of Electronics. “Some of the best examples of this are what are called checkpoint inhibitors, where essentially cancers put up stop signs [that prevent] T-cells from killing them. There are antibodies that have been developed now that basically block those inhibitory signals and allow the immune system to act against the cancers.”

However, despite this success, the use of immunotherapy remains limited by the scarcity of tumor-specific antigens — substances that can trigger an immune system response to a particular type of cancer. The toxicity of some therapies, when delivered as a systemic treatment to the whole body, for example, is another obstacle.

What’s more, the treatments are not successful in all cases. Indeed, even in some of the most successful tests, only 30-40 percent of patients will respond to a given therapy, Lu says.

As a result, there is now a push to develop combination therapies, in which different but complementary treatments are used to boost the immune response. So, for example, if one type of immunotherapy is used to knock out an inhibitory signal produced by a cancer, and the tumor responds by upregulating a second signal, an additional therapy could then be used to target this one as well, Lu says.

“Our belief is that there is a need to develop much more specific, targeted immunotherapies that work locally at the tumor site, rather than trying to treat the entire body systemically,” he says. “Secondly, we want to produce multiple immunotherapies from a single package, and therefore be able to stimulate the immune system in multiple different ways.”

To do this, Lu and a team including MIT postdocs Lior Nissim and Ming-Ru Wu, have built a gene circuit encoded in DNA designed to distinguish cancer cells from noncancer cells.

The circuit, which can be customized to respond to different types of tumor, is based on the simple AND gates used in electronics. Such AND gates will only switch on a circuit when two inputs are present.

Cancer cells differ from normal cells in the profile of their gene expression. So the researchers developed synthetic promoters — DNA sequences designed to initiate gene expression but only in cancer cells.

The circuit is delivered to cells in the affected area of the body using a virus. The synthetic promotors are then designed to bind to certain proteins that are active in tumor cells, causing the promoters to turn on.

“Only when two of these cancer promoters are activated, does the circuit itself switch on,” Lu says.

This allows the circuit to target tumors more accurately than existing therapies, as it requires two cancer-specific signals to be present before it will respond.

Once activated, the circuit expresses proteins designed to direct the immune system to target the tumor cells, including surface T cell engagers, which direct T cells to kill the cells. The circuit also expresses a checkpoint inhibitor designed to lift the brakes on T cell activity.

When the researchers tested the circuit in vitro, they found that it was able to detect ovarian cancer cells from amongst other noncancerous ovarian cells and other cell types.

They then tested the circuit in mice implanted with ovarian cancer cells, and demonstrated that it could trigger T cells to seek out and kill the cancer cells without harming other cells around them.

Finally, the researchers showed that the circuit could be readily converted to target other cancer cells.

“We identified other promoters that were selective for breast cancer, and when these were encoded into the circuit, it would target breast cancer cells over other types of cell,” Lu says.

Ultimately, they hope they will also be able to use the system to target other diseases, such as rheumatoid arthritis, inflammatory bowel disease, and other autoimmune diseases.

This advance will open up a new front against cancer, says Martin Fussenegger, a professor of biotechnology and bioengineering at ETH Zurich in Switzerland, who was not involved in the research.

“First author Lior Nissim, who pioneered the very first genetic circuit targeting tumor cells, has now teamed up with Timothy Lu to design RNA-based immunomodulatory gene circuits that take cancer immunotherapy to a new level,” Fussenegger says. “The design of this highly complex tumor-killing gene circuit was made possible by meticulous optimization and integration of several components that target and program tumor cells to become a specific prey for the immune system — this is very smart technology.”

The researchers now plan to test the circuit more fully in a range of cancer models. They are also aiming to develop a delivery system for the circuit, which would be both flexible and simple to manufacture and use.