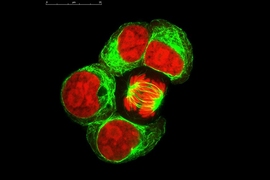 Living cells are capable of performing complex computations on the environmental signals they encounter.

These computations can be continuous, or analogue, in nature — the way eyes adjust to gradual changes in the light levels. They can also be digital, involving simple on or off processes, such as a cell’s initiation of its own death.

Synthetic biological systems, in contrast, have tended to focus on either analogue or digital processing, limiting the range of applications for which they can be used.

But now a team of researchers at MIT has developed a technique to integrate both analogue and digital computation in living cells, allowing them to form gene circuits capable of carrying out complex processing operations.

The synthetic circuits, presented in a paper published today in the journal Nature Communications, are capable of measuring the level of an analogue input, such as a particular chemical relevant to a disease, and deciding whether the level is in the right range to turn on an output, such as a drug that treats the disease.

In this way they act like electronic devices known as comparators, which take analogue input signals and convert them into a digital output, according to Timothy Lu, an associate professor of electrical engineering and computer science and of biological engineering, and head of the Synthetic Biology Group at MIT’s Research Laboratory of Electronics, who led the research alongside former microbiology PhD student Jacob Rubens.

“Most of the work in synthetic biology has focused on the digital approach, because [digital systems] are much easier to program,” Lu says.

However, since digital systems are based on a simple binary output such as 0 or 1, performing complex computational operations requires the use of a large number of parts, which is difficult to achieve in synthetic biological systems.

“Digital is basically a way of computing in which you get intelligence out of very simple parts, because each part only does a very simple thing, but when you put them all together you get something that is very smart,” Lu says. “But that requires you to be able to put many of these parts together, and the challenge in biology, at least currently, is that you can’t assemble billions of transistors like you can on a piece of silicon,” he says.

The mixed signal device the researchers have developed is based on multiple elements. A threshold module consists of a sensor that detects analogue levels of a particular chemical.

This threshold module controls the expression of the second component, a recombinase gene, which can in turn switch on or off a segment of DNA by inverting it, thereby converting it into a digital output.

If the concentration of the chemical reaches a certain level, the threshold module expresses the recombinase gene, causing it to flip the DNA segment. This DNA segment itself contains a gene or gene-regulatory element that then alters the expression of a desired output.

“So this is how we take an analogue input, such as a concentration of a chemical, and convert it into a 0 or 1 signal,” Lu says. “And once that is done, and you have a piece of DNA that can be flipped upside down, then you can put together any of those pieces of DNA to perform digital computing,” he says.

The team has already built an analogue-to-digital converter circuit that implements ternary logic, a device that will only switch on in response to either a high or low concentration range of an input, and which is capable of producing two different outputs.

In the future, the circuit could be used to detect glucose levels in the blood and respond in one of three ways depending on the concentration, he says.

Similar analogue-to-digital converter circuits could also be used to detect a variety of chemicals, simply by changing the sensor, Lu says.

The researchers are investigating the idea of using analogue-to-digital converters to detect levels of inflammation in the gut caused by inflammatory bowel disease, for example, and releasing different amounts of a drug in response.

Immune cells used in cancer treatment could also be engineered to detect different environmental inputs, such as oxygen or tumor lysis levels, and vary their therapeutic activity in response.

Other research groups are also interested in using the devices for environmental applications, such as engineering cells that detect concentrations of water pollutants, Lu says.

Ahmad Khalil, an assistant professor of biomedical engineering at Boston University, who was not involved in the work, says the researchers have expanded the repertoire of computation in cells.

“Developing these foundational tools and computational primitives is important as researchers try to build additional layers of sophistication for precisely controlling how cells interact with their environment,” Khalil says.

The research team recently created a spinout company, called Synlogic, which is now attempting to use simple versions of the circuits to engineer probiotic bacteria that can treat diseases in the gut.

The company hopes to begin clinical trials of these bacteria-based treatments within the next 12 months.