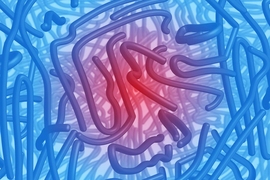 Caption:
Engineers at MIT have developed a polymer thermal conductor — a plastic material that, however counterintuitively, works as a heat conductor, dissipating heat rather than insulating it.
Credits:
Image: Chelsea Turner/MIT

Plastics are excellent insulators, meaning they can efficiently trap heat — a quality that can be an advantage in something like a coffee cup sleeve. But this insulating property is less desirable in products such as plastic casings for laptops and mobile phones, which can overheat, in part because the coverings trap the heat that the devices produce.

Now a team of engineers at MIT has developed a polymer thermal conductor — a plastic material that, however counterintuitively, works as a heat conductor, dissipating heat rather than insulating it. The new polymers, which are lightweight and flexible, can conduct 10 times as much heat as most commercially used polymers.

“Traditional polymers are both electrically and thermally insulating. The discovery and development of electrically conductive polymers has led to novel electronic applications such as flexible displays and wearable biosensors,” says Yanfei Xu, a postdoc in MIT’s Department of Mechanical Engineering. “Our polymer can thermally conduct and remove heat much more efficiently. We believe polymers could be made into next-generation heat conductors for advanced thermal management applications, such as a self-cooling alternative to existing electronics casings.”

Xu and a team of postdocs, graduate students, and faculty, have published their results today in Science Advances. The team includes Xiaoxue Wang, who contributed equally to the research with Xu, along with Jiawei Zhou, Bai Song, Elizabeth Lee, and Samuel Huberman; Zhang Jiang, physicist at Argonne National Laboratory; Karen Gleason, associate provost of MIT and the Alexander I. Michael Kasser Professor of Chemical Engineering; and Gang Chen, head of MIT’s Department of Mechanical Engineering and the Carl Richard Soderberg Professor of Power Engineering.

If you were to zoom in on the microstructure of an average polymer, it wouldn’t be difficult to see why the material traps heat so easily. At the microscopic level, polymers are made from long chains of monomers, or molecular units, linked end to end. These chains are often tangled in a spaghetti-like ball. Heat carriers have a hard time moving through this disorderly mess and tend to get trapped within the polymeric snarls and knots.

And yet, researchers have attempted to turn these natural thermal insulators into conductors. For electronics, polymers would offer a unique combination of properties, as they are lightweight, flexible, and chemically inert. Polymers are also electrically insulating, meaning they do not conduct electricity, and can therefore be used to prevent devices such as laptops and mobile phones from short-circuiting in their users’ hands.

Several groups have engineered polymer conductors in recent years, including Chen’s group, which in 2010 invented a method to create “ultradrawn nanofibers” from a standard sample of polyethylene. The technique stretched the messy, disordered polymers into ultrathin, ordered chains — much like untangling a string of holiday lights. Chen found that the resulting chains enabled heat to skip easily along and through the material, and that the polymer conducted 300 times as much heat compared with ordinary plastics.

But the insulator-turned-conductor could only dissipate heat in one direction, along the length of each polymer chain. Heat couldn’t travel between polymer chains, due to weak Van der Waals forces — a phenomenon that essentially attracts two or more molecules close to each other. Xu wondered whether a polymer material could be made to scatter heat away, in all directions.

Xu conceived of the current study as an attempt to engineer polymers with high thermal conductivity, by simultaneously engineering intramolecular and intermolecular forces — a method that she hoped would enable efficient heat transport along and between polymer chains.

The team ultimately produced a heat-conducting polymer known as polythiophene, a type of conjugated polymer that is commonly used in many electronic devices.

Hints of heat in all directions

Xu, Chen, and members of Chen’s lab teamed up with Gleason and her lab members to develop a new way to engineer a polymer conductor using oxidative chemical vapor deposition (oCVD), whereby two vapors are directed into a chamber and onto a substrate, where they interact and form a film. “Our reaction was able to create rigid chains of polymers, rather than the twisted, spaghetti-like strands in normal polymers.” Xu says.

In this case, Wang flowed the oxidant into a chamber, along with a vapor of monomers — individual molecular units that, when oxidized, form into the chains known as polymers.

“We grew the polymers on silicon/glass substrates, onto which the oxidant and monomers are adsorbed and reacted, leveraging the unique self-templated growth mechanism of CVD technology," Wang says.

Wang produced relatively large-scale samples, each measuring 2 square centimeters — about the size of a thumbprint.

“Because this sample is used so ubiquitously, as in solar cells, organic field-effect transistors, and organic light-emitting diodes, if this material can be made to be thermally conductive, it can dissipate heat in all organic electronics,” Xu says.

“The temporal profile of the decay of surface temperature is related to the speed of heat spreading, from which we were able to compute the thermal conductivity,” Zhou says.

On average, the polymer samples were able to conduct heat at about 2 watts per meter per kelvin — about 10 times faster than what conventional polymers can achieve. At Argonne National Laboratory, Jiang and Xu found that polymer samples appeared nearly isotropic, or uniform. This suggests that the material’s properties, such as its thermal conductivity, should also be nearly uniform. Following this reasoning, the team predicted that the material should conduct heat equally well in all directions, increasing its heat-dissipating potential.

Going forward, the team will continue exploring the fundamental physics behind polymer conductivity, as well as ways to enable the material to be used in electronics and other products, such as casings for batteries, and films for printed circuit boards.

“We can directly and conformally coat this material onto silicon wafers and different electronic devices” Xu says. “If we can understand how thermal transport [works] in these disordered structures, maybe we can also push for higher thermal conductivity. Then we can help to resolve this widespread overheating problem, and provide better thermal management.”

This research was supported, in part, by the U.S. Department of Energy — Basic Energy Sciences and the MIT Deshpande Center.

Insulators made into conductors