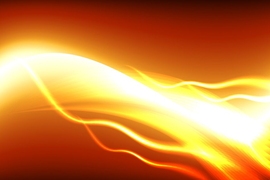 ↓ Download Image
Caption: MIT mathematicians have identified the limits to heat flow at the nanoscale.

Caption:
MIT mathematicians have identified the limits to heat flow at the nanoscale.

How much heat can two bodies exchange without touching? For over a century, scientists have been able to answer this question for virtually any pair of objects in the macroscopic world, from the rate at which a campfire can warm you up, to how much heat the Earth absorbs from the sun. But predicting such radiative heat transfer between extremely close objects has proven elusive for the past 50 years.

Now, MIT mathematicians have derived a formula for determining the maximum amount of heat exchanged between two objects separated by distances shorter than the width of a single hair. For any two objects situated mere nanometers apart, the formula can be used to calculate the most heat one body may transmit to another, based on two parameters: what the objects are made of, and how far apart they are.

The formula may help engineers identify optimal materials and designs for tuning small, intricately patterned devices, such as thermophotovoltaic surfaces that convert thermal energy into electrical energy, and cooling systems for computer chips.

As a demonstration, the scientists used their formula to calculate the maximum heat transfer between two nanometer-spaced metal plates, and found that the structures may be able to transmit orders of magnitude more heat than they currently achieve.

“This [formula] provides a target to say, ‘this is what we should be looking for,’ and compared to what we’ve seen so far in simple structures, there’s orders of magnitude more room for improvement for this kind of heat transfer,” says Owen Miller, a postdoc in the Department of Mathematics. “If that’s practically achievable, that could make a huge difference in, for example, thermophotovoltaics.”

Miller and his colleagues Steven Johnson, professor of applied mathematics at MIT, and Alejandro Rodriguez, assistant professor of electrical engineering at Princeton University, have published their results in Physical Review Letters.

Since the late 1800s, scientists have used the Stefan-Boltzmann law to calculate the maximum amount of heat one body can transmit to another. This maximum heat transfer depends only on the two bodies’ temperatures and can be reached only when both bodies are extremely opaque, absorbing all the heat that is radiated on them — a theoretical notion known as the blackbody limit.

However, for objects smaller than the wavelength of heat — about 8 micrometers — scientists’ established theories of heat transfer no longer apply. In fact, it appears that at the nanoscale, the amount of heat transmitted between objects actually exceeds that predicted by the blackbody limit, hundreds of times over.

As it turns out, when objects are extremely close together, heat flows not just as electromagnetic waves, but as evanescent waves — exponentially decaying waves that have little effect at the macroscale, as they typically die away before reaching another object. At the nanoscale, however, evanescent waves can play a large role in heat transfer, tunneling between objects and essentially releasing trapped energy in the form of extra heat. Only in the last few years have Johnson and others at MIT, including  Homer Reid, an applied mathematics instructor; Gang Chen, the Carl Richard Soderberg Professor of Power Engineering and head of the Department of Mechanical Engineering; and Mehran Kardar, the Francis Friedman Professor of Physics; begun to predict and quantify heat transfer at the nanoscale.

Miller and his colleagues derived a formula for determining the maximum heat transfer between two extremely close objects. To do so, they used an existing model that describes radiative heat transfer as electrical currents flowing within two objects. Such currents arise from each object’s fluctuating electric dipoles, or, its distribution of negative and positive charges.

Using this model as a framework, the team added two additional constraints: energy conservation, in which there is a limit to the amount of energy one body can absorb; and reciprocity, where each body may be treated as a source or receiver of heat. With this approach, the researchers derived a simple equation to calculate the maximum, or upper bound, of heat that two bodies may exchange at nanoscale separations.

The equation is surprisingly generalizable and can be applied to any pair of objects regardless of their shape. Scientists simply input two parameters into the equation: separation distance, and certain material properties of each object — namely, the maximum amount of electric current that can build up in a given material.

“Now we have a formula for the upper bound,” Johnson says. “Given the material and the separation you want, you’d just plug it into the formula and boom, you’re done — it’s very easy. Now you can go backwards and try to play with materials and optimize them.”

Johnson says engineers can use the formula to identify the best possible combination and orientation of materials for optimizing heat transfer in nanodevices such as thermophotovoltaics, which involves etching surfaces with very fine, intricate patterns to improve their heat-absorbing properties.

“This is still ongoing work, but aluminum looks like it has a lot of potential if it can be designed properly,” Miller says. “It has to be designed properly in order to achieve the limit, which is why people haven’t seen large enhancements with such materials before, but this really opens up a new class of materials that may be used.”

Breaking the law, at the nanoscale