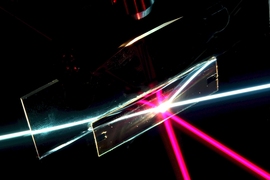 ↓ Download Image
Caption: In this photo of the angular-selective sample (the rectangular region), a beam of white light passes through as if the sample was transparent glass. The red beam, coming in at a different angle, is reflected away, as if the sample was a mirror. The other lines are reflections of the beams. (This setup is immersed in liquid filled with light-scattering ­particles to make the rays visible).
Credits: Photo: Weishun Xu and Yuhao Zhang 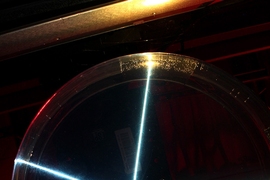 ↓ Download Image
Caption: Seen from above, two white beams reaching the sample material either pass through or are reflected, because of a slight difference in the angle of approach.
Credits: Photo: Weishun Xu and Yuhao Zhang

Caption:
In this photo of the angular-selective sample (the rectangular region), a beam of white light passes through as if the sample was transparent glass. The red beam, coming in at a different angle, is reflected away, as if the sample was a mirror. The other lines are reflections of the beams. (This setup is immersed in liquid filled with light-scattering ­particles to make the rays visible).
Credits:
Photo: Weishun Xu and Yuhao Zhang

Caption:
Seen from above, two white beams reaching the sample material either pass through or are reflected, because of a slight difference in the angle of approach.
Credits:
Photo: Weishun Xu and Yuhao Zhang

Light waves can be defined by three fundamental characteristics: their color (or wavelength), polarization, and direction. While it has long been possible to selectively filter light according to its color or polarization, selectivity based on the direction of propagation has remained elusive.

But now, for the first time, MIT researchers have produced a system that allows light of any color to pass through only if it is coming from one specific angle; the technique reflects all light coming from other directions. This new approach could ultimately lead to advances in solar photovoltaics, detectors for telescopes and microscopes, and privacy filters for display screens.

The work is described in a paper appearing this week in the journal Science, written by MIT graduate student Yichen Shen, professor of physics Marin Soljačić, and four others. “We are excited about this,” Soljačić says, “because it is a very fundamental building block in our ability to control light.”

The new structure consists of a stack of ultrathin layers of two alternating materials where the thickness of each layer is precisely controlled. “When you have two materials, then generally at the interface between them you will have some reflections,” Soljačić explains. But at these interfaces, “there is this magical angle called the Brewster angle, and when you come in at exactly that angle and the appropriate polarization, there is no reflection at all.”

While the amount of light reflected at each of these interfaces is small, by combining many layers with the same properties, most of the light can be reflected away — except for that coming in at precisely the right angle and polarization.

Using a stack of about 80 alternating layers of precise thickness, Shen says, “We are able to reflect light at most of the angles, over a very broad band [of colors]: the entire visible range of frequencies.”

Previous work had demonstrated ways of selectively reflecting light except for one precise angle, but those approaches were limited to a narrow range of colors of light. The new system’s breadth could open up many potential applications, the team says.

Shen says, “This could have great applications in energy, and especially in solar thermophotovoltaics” — harnessing solar energy by using it to heat a material, which in turn radiates light of a particular color. That light emission can then be harnessed using a photovoltaic cell tuned to make maximum use of that color of light. But for this approach to work, it is essential to limit the heat and light lost to reflections, and re-emission, so the ability to selectively control those reflections could improve efficiency.

The findings could also prove useful in optical systems, such as microscopes and telescopes, for viewing faint objects that are close to brighter objects — for example, a faint planet next to a bright star. By using a system that receives light only from a certain angle, such devices could have an improved ability to detect faint targets. The filtering could also be applied to display screens on phones or computers, so only those viewing from directly in front could see them.

In principle, the angular selectivity can be made narrower simply by adding more layers to the stack, the researchers say. For the experiments performed so far, the angle of selectivity was about 10 degrees; roughly 90 percent of the light coming in within that angle was allowed to pass through.

This video shows the full process of the experimental setup, with the sample rotating 90 degrees.

While these experiments were done using layers of glass and tantalum oxide, Shen says that in principle any two materials with different refractive indices could be used.

John Pendry, a professor at Imperial College London who was not connected to this research, calls this an “ingenious application.”

“On a macroscopic scale this is equivalent to observing the world through a set of louvers … that allow light to enter from one direction only,” Pendry says. “However, the new device is infinitely more refined, operating as it does on the length scale of a wavelength.”

The team also included MIT research scientist Ivan Celanovic; associate professor of mathematics Steven Johnson; John Joannopoulos, the Francis Wright Davis Professor of Physics; and Dexin Ye of Zhejiang University in China. The work was supported in part by the Army Research Office, through MIT’s Institute for Soldier Nanotechnologies, and the U.S. Department of Energy, through the MIT S3TEC Energy Research Frontier Center.

Xinhuanet highlights a new system developed by MIT Professor Marin Soljačić  and graduate student Yichen Shen that allows for filtering light waves based on direction. This research could have major implications for solar energy technology.

New Scientist reporter Jacob Aron reports on how MIT researchers have developed a new system that filters light waves based on the direction they are traveling. The system could be used to take photographs of faint objects, Aron writes.