Breaking the law, at the nanoscale 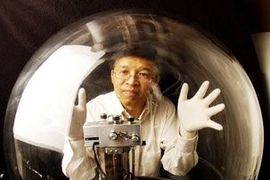 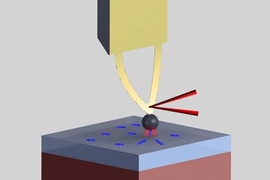 ↓ Download Image
Caption: A diagram of the setup, including a cantilever from an atomic force microscope, used to measure the heat transfer between objects separated by nanoscale distances.
Credits: Courtesy / Sheng Shen

Caption:
A diagram of the setup, including a cantilever from an atomic force microscope, used to measure the heat transfer between objects separated by nanoscale distances.
Credits:
Courtesy / Sheng Shen

A well-established physical law describes the transfer of heat between two objects, but some physicists have long predicted that the law should break down when the objects are very close together. Scientists had never been able to confirm, or measure, this breakdown in practice. For the first time, however, MIT researchers have achieved this feat, and determined that the heat transfer can be 1,000 times greater than the law predicts.

The new findings could lead to significant new applications, including better design of the recording heads of the hard disks used for computer data storage, and new kinds of devices for harvesting energy from heat that would otherwise be wasted.

Planck's blackbody radiation law, formulated in 1900 by German physicist Max Planck, describes how energy is dissipated, in the form of different wavelengths of radiation, from an idealized non-reflective black object, called a blackbody. The law says that the relative thermal emission of radiation at different wavelengths follows a precise pattern that varies according to the temperature of the object. The emission from a blackbody is usually considered as the maximum that an object can radiate.

The law works reliably in most cases, but Planck himself had suggested that when objects are very close together, the predictions of his law would break down. But actually controlling objects to maintain the tiny separations required to demonstrate this phenomenon has proved incredibly difficult.

"Planck was very careful, saying his theory was only valid for large systems," explains Gang Chen, MIT's Carl Richard Soderberg Professor of Power Engineering and director of the Pappalardo Micro and Nano Engineering Laboratories. "So he kind of anticipated this [breakdown], but most people don't know this."

Part of the problem in measuring the way energy is radiated when objects are very close is the mechanical difficulty of maintaining two objects in very close proximity, without letting them actually touch. Chen and his team, graduate student Sheng Shen and Columbia University Professor Arvind Narayaswamy, solved this problem in two ways, as described in a paper to be published in the August issue of the journal Nano Letters (available now online). First, instead of using two flat surfaces and trying to maintain a tiny gap between them, they used a flat surface next to a small round glass bead, whose position is easier to control. "If we use two parallel surfaces, it is very hard to push to nanometer scale without some parts touching each other," Chen explains, but by using a bead there is just a single point of near-contact, which is much easier to maintain. Then, they used the technology of the bi-metallic cantilever from an atomic-force microscope to measure the temperature changes with great precision.

"We tried for many years doing it with parallel plates," Chen says. But with that method, they were unable to sustain separations of closer than about a micron (one millionth of a meter). By using the glass (silica) beads, they were able to get separations as small as 10 nanometers (10 billionths of a meter, or one-hundredth the distance achieved before), and are now working on getting even closer spacings.

Professor Sir John Pendry of Imperial College London, who has done extensive work in this field, calls the results "very exciting," noting that theorists have long predicted such a breakdown in the formula and the activation of a more powerful mechanism.

"Experimental confirmation has proved elusive because of the extreme difficulty in measuring temperature differences over very small distances," Pendry says. "Gang Chen's experiments provide a beautiful solution to this difficulty and confirm the dominant contribution of near field effects to heat transfer."

In today's magnetic data recording systems - such as the hard disks used in computers - the spacing between the recording head and the disk surface is typically in the 5 to 6 nanometer range, Chen says. The head tends to heat up, and researchers have been looking for ways to manage the heat or even exploit the heating to control the gap. "It's a very important issue for magnetic storage," he says. Such applications could be developed quite rapidly, he says, and some companies have already shown a strong interest in this work

The new findings could have "a broad impact," says Shen. People working with devices using small separations will now have a clear understanding that Planck's law "is not a fundamental limitation," as many people now think, he says. But further work is needed to explore even closer spacings, Chen says, because "we don't know exactly what the limit is yet" in terms of how much heat can be dissipated in closely spaced systems. "Current theory will not be valid once we push down to 1 nanometer spacing."

And in addition to practical applications, he says, such experiments "might provide a useful tool to understand some basic physics."

The work was funded by the U.S. Department of Energy and the Air Force Office of Scientific Research.