Does free flow of capital make the economy more efficient? 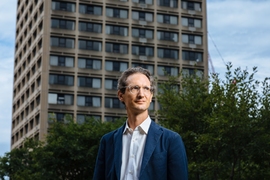 ↓ Download Image
Caption: “It’s a fantastic place. It’s the center of innovation,” Professor David Thesmar says about MIT. “It’s something you feel very strongly when you come here, the energy around campus. People are very serious about the progression of academic science.”
Credits: Image: Jared Charney 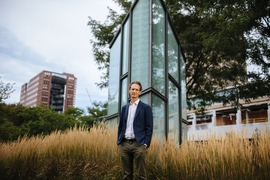 Caption:
“It’s a fantastic place. It’s the center of innovation,” Professor David Thesmar says about MIT. “It’s something you feel very strongly when you come here, the energy around campus. People are very serious about the progression of academic science.”
Credits:
Image: Jared Charney

David Thesmar is an MIT professor who studies the growing influence of the financial sector over large economies. But here’s another way of summarizing his work: Thesmar is a scholar of the turbulence these changes have created.

“My main research topic is the anatomy of financialization,” says Thesmar, “and how the contractual arrangements that get made in the financial sector trickle down to the rest of the economy.”

By that, Thesmar means he studies the consequences of the global wave of financial development since the 1980s. This “financial deepening,” as he puts it, came from a combination of deregulation and technological change; it led to the emergence of hedge funds, private equity funds, the promotion of shareholder value maximization, and deeper and more liquid stock markets.

Advocates of such financialization contend that it improves the allocation of funds to worthy firms, and that hard-nosed management helps productivity and output. Opponents suggest it damages viable firms and needlessly leaves workers unemployed.

Through careful empirical study of his native France, Thesmar has found that, true to conventional wisdom, “Banks are accelerating the failure of failing firms and accelerating the [growth] of expanding firms. Professional financiers basically reallocate capital, and you get more creative destruction in the economy.”

As a result, Thesmar adds, “the [effect] of finance is very similar to that of technical change or international trade, in the sense that it does the same thing: It creates more turbulence within the economy. It destroys and creates more, and it creates winners and losers all the time, at a faster rate. It churns people more.” The churn is the cost of having a better allocation of finance to firms.

But Thesmar’s research about all this turbulence also turns up some unexpected results. The improved allocation coming from financial deepening may not be as enormous as many would expect, an issue Thesmar is continuing to study.

“But how big [an effect] is it?” Thesmar asks. “What I seem to be finding is that it’s not that big a difference.” Yes, better finance decisions take funds out of poorly performing firms and reallocate them to better firms. But the aggregate size of this reallocation tends to be rather small, partly because successful firms already generate a significant amount of internal funds to finance their operations.

“It turns out the reallocations we observe are not from bad firms to the best firms,” Thesmar says. “It goes from the next-best firm to the better firm, and so the difference in productivity between the classes of firms, the losers and the winners, is not big.”

After years of influential work on such questions, Thesmar recently joined MIT, where he is the Franco Modigliani Professor of Financial Economics, a prestigious chair (Modigliani was an MIT economist and Nobel laureate), and a professor in the MIT Sloan School of Management.

Thesmar’s presence in the U.S. economics orbit would have been hard to predict when he was young. He grew up in Paris, where his father was an art appraiser, and his mother was a lawyer.

“I guess I was much more into science than my parents were,” he says wryly. Thesmar had a long-running interest in physics, and he received his BA in 1995 in both physics and economics at the École Polytechnique. But eventually Thesmar became more interested in economics, and he earned his PhD from the Paris School of Economics, in 2000.

“What I found attractive about economics was its combination of rigor, like in physics, and of social science, because I was an avid history reader and follower of current affairs,” Thesmar says. Moreover, he adds, in his formative years as a student, “I had great teachers when I was at school, which is probably what also led me to study economics.”

Still, Thesmar did not immediately become an academic economist. First, he took a job at France’s statistical office, INSEE, where he studied business activity. This  turned out to be a crucial component of Thesmar’s career. INSEE had singularly comprehensive statistics on French firms. Before long, Thesmar was developing from-the-ground-up knowledge of the data — and formulating the kinds of research questions that information could address.

Finally, in 2005, Thesmar took a professorship at HEC Paris, a prominent French business school. He soon began publishing some influential papers, including two in 2007 that he still cites as being touchstones of his work.

One of those papers, “Banking Deregulation and Industry Structure: Evidence from the French Banking Act of 1985,” written with two co-authors (including Antoinette Schoar, now an MIT professor as well), found that when France gave its banks more latitude to invest in other businesses, they aggressively reallocated capital away from struggling firms, giving empirical confirmation to the popular image.

On the other hand, another paper, “Performance and Behavior of Family Firms: Evidence from the French Stock Market,” found that family-run firms, which constitute two-thirds of publicly listed stocks in France, perform better than other corporations. Why? Essentially, these firms were “more parsimonious” in their spending, Thesmar found.

“Family firms tend to be productive and profitable,” Thesmar says. “The reason why they are profitable is they tend to pay their workers a little bit less, and the reason why they do that is, they take fewer risks. Because a company does not take risks, they are not having to fire their employees, and that is a kind of an insurance that people are willing to pay for, in the form of lower wages. They’ve got more job security.”

As deeply as Thesmar has dug into the financialization of firms, it is not the only subject he analyzes. He has also extensively studied the systemic shocks created by the market meltdowns in 2008; the effects of technological change on employment; and issues in the subfield of behavioral finance, especially how the structure of firms affects the decisions they make.

Thesmar’s move to the Institute has been made easier, he adds, because “I have great colleagues,” including several he currently works with, and others he has worked with in the past. And he looks forward to expanding his research portfolio at MIT.

“It’s a fantastic place. It’s the center of innovation,” Thesmar says. “It’s something you feel very strongly when you come here, the energy around campus. People are very serious about the progression of academic science.”

“It’s a fantastic place. It’s the center of innovation,” Professor David Thesmar says about MIT. “It’s something you feel very strongly when you come here, the energy around campus. People are very serious about the progression of academic science.”
Image: Jared Charney

At MIT, Thomas Piketty calls for policies and collaborations to reduce income inequality