Contemplating the eyes in the sky 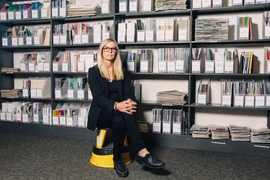 ↓ Download Image
Caption: “I really wanted people to think of the satellite not only as this technology that’s floating around out there in orbit, but as a machine that plays a structuring role in our everyday lives,” says Lisa Parks, a professor in MIT’s Comparative Media Studies/Writing program.
Credits: Photo: Jake Belcher 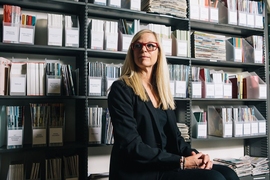 ↓ Download Image
Caption: “I really wanted people to think of the satellite not only as this technology that’s floating around out there in orbit, but as a machine that plays a structuring role in our everyday lives,” says Lisa Parks, a professor in MIT’s Comparative Media Studies/Writing program.
Credits: Photo: Jake Belcher

Caption:
“I really wanted people to think of the satellite not only as this technology that’s floating around out there in orbit, but as a machine that plays a structuring role in our everyday lives,” says Lisa Parks, a professor in MIT’s Comparative Media Studies/Writing program.
Credits:
Photo: Jake Belcher

Satellites have changed the way we experience the world, by beaming back images from around the globe and letting us explore the planet through online maps and other visuals. Such tools are so familiar today we often take them for granted.

Lisa Parks does not. A professor in MIT’s Comparative Media Studies/Writing program, Parks is an expert on satellites and their cultural effects, among other forms of aerial technology. Her work analyzes how technology informs the content of our culture, from images of war zones to our idea of a “global village.”

“I really wanted people to think of the satellite not only as this technology that’s floating around out there in orbit, but as a machine that plays a structuring role in our everyday lives,” Parks says.

As such, Parks thinks we often need to think more crisply about both the power and limitations of the technology. Satellite images helped reveal the presence of mass graves following the Srebrenica massacre in the 1990s Balkans war, for instance. But they became a form of “proof” only after careful follow-up reporting by journalists and other investigators who reconstructed what had happened. Satellites often offer hints about life on the ground, but not omniscience.

“Since satellite images are so abstract and remote, they necessitate closer scrutiny, re-viewing, careful description, and interpretation in ways that other images of war do not,” Parks writes in her 2005 book “Cultures in Orbit.”

Alternately, satellite images can open up our world — or be exclusionary. The landmark 1967 BBC show “Our World,” one of the first broadcasts to feature live global satellite video links, was touted as a global celebration. But as Parks writes, it reinforced distinctions between regions, by emphasizing “the modernity, permanence, and civilizational processes of industrial nations,” and thus “undermining the utopian assumption that satellites inevitably turned the world into a harmonic ‘global village.’”

For her distinctive scholarship, Parks was hired by MIT in 2016. She studies a range of media technologies — from the content of television to drone imagery — and has co-edited five books of essays on such topics, including the 2017 volume “Life in the Age of Drone Warfare.” Parks is also the principal investigator for MIT’s Global Media Technologies and Cultures Lab, which conducts on-site research about media usage in a range of circumstances.

“Technology and culture is what I’m interested in,” Parks says.

Big sky, then and now

Parks grew up in Southern California and Montana. Her father was a civil engineer and her mother was a social worker — a combination, Parks suggests, that may have helped shape her interests in the social effects of technology.

As an undergraduate at the University of Montana, Parks received her BA in political science and history. She initially expected to become a lawyer but then reconsidered her career path.

“I didn’t want to be in an office all of the time,” Parks says. So she went back to the classroom, at the University of Wisconsin at Madison, where she received her PhD in media studies. It was there that Parks’ attention really turned to the skies and the technologies orbiting in them. She wrote a research paper on satellites that turned into both her dissertation and first book. Parks then took a job at the University of California at Santa Barbara, where she taught for over a decade before joining MIT.

“I loved my job there, I loved working in the U.C. system, and I had excellent colleagues,” says Parks. Still, she adds, she was fascinated by the opportunities MIT offers, including its abundant interdisciplinary projects that pull together researchers from multiple fields.

In the classroom, Parks teaches an undergraduate course on current debates in media, which grapples with topics ranging from surveillance to net neutrality and media conglomerations. For graduate students, she has been teaching a foundational media theory course.

“If you’re an MIT student and you want to come out of this place having thought about some of the policy implications relating to the media in this current environment, our classes equip you to think historically and critically about media issues,” Parks says.

Technology … and justice for all

One other issue strongly motivates Parks’ scholarship: the idea that technology is unevenly distributed around the world, with important implications for inequality.

“Most people in the world live in relatively disenfranchised or underprivileged conditions,” Parks says. “If we shift the question about designing technologies so they serve a broader array of people’s interests, and designs are interwoven with concerns about equity, justice, and other democratic principles, don’t those technologies start to look different?”

To this end, MIT’s Global Media Technologies and Cultures Lab, under Parks’ direction, studies topics such as media infrastructure, to see how video is distributed in places such as rural Zambia. Parks’ research has also examined topics such as the video content accessible to Aboriginal Australians, who, starting in the 1980s, attempted to gain greater control of, and autonomy over, the satellite television programming in rural Australia.

Parks’ research takes place in a variety of social and economic orbits: In March, you could have found her and a research assistant, Matt Graydon, at the Satellite 2018 convention in Washington, interviewing CEOs and industry leaders for a new study of satellite-based internet services.

In some places around the globe, the effects of aerial technology are more immediate. In the volume on drones, Parks writes that these tools create a “vertical mediation” between ground and sky — that when “drones are operating in an area over time, above a certain region, they change the status of sites and motions on the ground.” She elaborates on this in her new book, out this year, “Rethinking Media Coverage: Vertical Mediation and the War on Terror.”

As diverse as these topics may seem at first, Parks’ scholarly output is intended to expore more deeply the connection between aerial and orbital technologies and life on the ground, even if it is not on the mental radar for most of us.

“We need to be studying these objects in orbit above, and think about orbital real estate as something that’s relevant to life on Earth,” Parks says.

3 Questions: Lisa Parks on drones, warfare, and the media