China could face deadly heat waves due to climate change

One of the world’s most densely populated regions may push the boundaries of habitability by the end of this century, study finds.
Watch Video
David L. Chandler | MIT News Office
Publication Date:
Press Inquiries 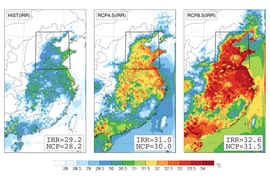 ↓ Download Image
Caption: “This spot is just going to be the hottest spot for deadly heat waves in the future, especially under climate change,” says Professor Elfatih Eltahir.

Caption:
“This spot is just going to be the hottest spot for deadly heat waves in the future, especially under climate change,” says Professor Elfatih Eltahir.

A region that holds one of the biggest concentrations of people on Earth could be pushing against the boundaries of habitability by the latter part of this century, a new study shows.

Research has shown that beyond a certain threshold of temperature and humidity, a person cannot survive unprotected in the open for extended periods — as, for example, farmers must do. Now, a new MIT study shows that unless drastic measures are taken to limit climate-changing emissions, China’s most populous and agriculturally important region could face such deadly conditions repeatedly, suffering the most damaging heat effects, at least as far as human life is concerned, of any place on the planet.

The study shows that the risk of deadly heat waves is significantly increased because of intensive irrigation in this relatively dry but highly fertile region, known as the North China Plain — a region whose role in that country is comparable to that of the Midwest in the U.S. That increased vulnerability to heat arises because the irrigation exposes more water to evaporation, leading to higher humidity in the air than would otherwise be present and exacerbating the physiological stresses of the temperature.

The new findings, by Elfatih Eltahir at MIT and Suchul Kang at the Singapore-MIT Alliance for Research and Technology, are reported in the journal Nature Communications. The study is the third in a set; the previous two projected increases of deadly heat waves in the Persian Gulf area and in South Asia. While the earlier studies found serious looming risks, the new findings show that the North China Plain, or NCP, faces the greatest risks to human life from rising temperatures, of any location on Earth.

“The response is significantly larger than the corresponsing response in the other two regions,” says Eltahir, who is the the Breene M. Kerr Professor of Hydrology and Climate and Professor of Civil and Environmental Engineering. The three regions the researchers studied were picked because past records indicate that combined temperature and humidity levels reached greater extremes there than on any other land masses. Although some risk factors are clear — low-lying valleys and proximity to warm seas or oceans — “we don’t have a general quantitative theory through which we could have predicted” the location of these global hotspots, he explains. When looking empirically at past climate data, “Asia is what stands out,” he says.

Although the Persian Gulf study found some even greater temperature extremes, those were confined to the area over the water of the Gulf itself, not over the land. In the case of the North China Plain, “This is where people live,” Eltahir says.

The key index for determining survivability in hot weather, Eltahir explains, involves the combination of heat and humidity, as determined by a measurement called the wet-bulb temperature. It is measured by literally wrapping wet cloth around the bulb (or sensor) of a thermometer, so that evaporation of the water can cool the bulb. At 100 percent humidity, with no evaporation possible, the wet-bulb temperature equals the actual temperature.

This measurement reflects the effect of temperature extremes on a person in the open, which depends on the body’s ability to shed heat through the evaporation of sweat from the skin. At a wet-bulb temperature of 35 degrees Celsius (95 F), a healthy person may not be able to survive outdoors for more than six hours, research has shown. The new study shows that under business-as-usual scenarios for greenhouse gas emissions, that threshold will be reached several times in the NCP region between 2070 and 2100.

“This spot is just going to be the hottest spot for deadly heat waves in the future, especially under climate change,” Eltahir says. And signs of that future have already begun: There has been a substantial increase in extreme heat waves in the NCP already in the last 50 years, the study shows. Warming in this region over that period has been nearly double the global average — 0.24 degrees Celsius per decade versus 0.13. In 2013, extreme heat waves in the region persisted for up to 50 days, and maximum temperatures topped 38 C in places. Major heat waves occurred in 2006 and 2013, breaking records. Shanghai, East China’s largest city, broke a 141-year temperature record in 2013, and dozens died.

To arrive at their projections, Eltahir and Kang ran detailed climate model simulations of the NCP area — which covers about 4,000 square kilometers — for the past 30 years. They then selected only the models that did the best job of matching the actual observed conditions of the past period, and used those models to project the future climate over 30 years at the end of this century. They used two different future scenarios: business as usual, with no new efforts to reduce emissions; and moderate reductions in emissions, using standard scenarios developed by the Intergovernmental Panel on Climate Change. Each version was run two different ways: one including the effects of irrigation, and one with no irrigation.

One of the surprising findings was the significant contribution by irrigation to the problem — on average, adding about a half-degree Celsius to the overall warming in the region that would occur otherwise. That’s because, even though extra moisture in the air produces some local cooling effect at ground level, this is more than offset by the added physiological stress imposed by the higher humidity, and by the fact that extra water vapor — itself a powerful greenhouse gas — contributes to an overall warming of the air mass.

“Irrigation exacerbates the impact of climate change,” Eltahir says. In fact, the researchers report, the combined effect, as projected by the models, is a bit greater the sum of the individual impacts of irrigation or climate change alone, for reasons that will require further research.

The bottom line, as the researchers write in the paper, is the importance of reducing greenhouse gas emissions in order to reduce the likelihood of such extreme conditions. They conclude, “China is currently the largest contributor to the emissions of greenhouse gases, with potentially serious implications to its own population: Continuation of the current pattern of global emissions may limit habitability of the most populous region of the most populous country on Earth.”

“This is a solid piece of research, extending and refining some of the previous studies on man-made climate change and its role on heat waves,” says Christoph Schauer, a professor of atmospheric and climate science at ETH Zurich, who was involved in the work. “This is a very useful study. It highlights some of the potentially serious challenges that will emerge with unabated climate change. … These are important and timely results, as they may lead to adequate adaptation measures before potentially serious climate conditions will emerge.”

Schauer adds that “While there is overwhelming evidence that climate change has started to affect the frequency and intensity of heat waves, century-scale climate projections imply considerable uncertainties” that will require further study. However, he says, “Regarding the health impact of high wet-bulb temperatures, the applied health threshold (wet-bulb temperatures near the human body temperature) is very solid and it actually derives from fundamental physical principles.”

In an article for NBC News about how climate change could make life unsustainable in the countries along the Persian Gulf and North Africa, Charlene Gubash highlights an MIT study showing that temperatures there and in southwest Asia, “will exceed the threshold for human survival if nations fail to reign in emissions.”

An MIT study finds that rising temperatures due to climate change will make the North China Plain uninhabitable by the end of the century, reports Newsweek’s Brendan Cole. The area could experience heat and humidity that is “so strong that it is impossible for the human body to cool itself,” Cole explains.

New research by Prof. Elfatih Eltahir finds that the North China Plain could face deadly heat waves by the end of the century unless measures are taken to curb carbon emissions, reports Damian Carrington for The Guardian. Eltahir found that there already has been a, “substantial increase in extreme heatwaves on the plain in the past 50 years.”

CNN reporter Bard Wilkinson writes that a study by MIT researchers finds that by the end of the century China’s North Plain region will experience heatwaves that could kill healthy people within six hours. Wilkinson explains that the findings are, “worrying because many of the region's 400 million people are farmers exposed to climactic conditions.”

A new study by led by Prof. Elfatih Eltahir finds that climate change could cause the North China Plain, China’s most populous agricultural region, to face deadly heatwaves by 2100, reports Isabelle Gerretsen for the Thomson Reuters Foundation. “The intensity of those heatwaves means that survival of humans would be questionable,” says Eltahir.

Axios reporter Andrew Freedman examines a new study by researchers at MIT and the Singapore-MIT Alliance for Research and Technology showing that China’s breadbasket, the North China Plain, could face severe heat waves. Big picture, writes Freedman, “such heat waves could both threaten lives and dampen economic output in the region, where 400 million people live.”