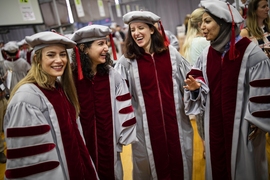 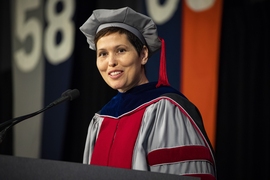 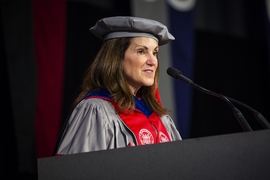 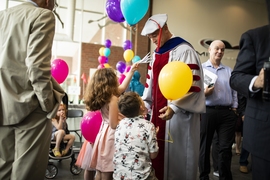 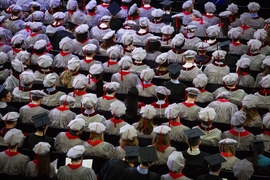 “The contributions you can make with your PhD can amplify some kinds of data, collaborations, problems, and solutions over others,” said Callison, a scholar at the University of British Columbia and award-winning journalist. “Should you choose, your work and your research can shift society toward better systems and processes, which make the world a more just, more fair place for all of us to live in.”

The joyous ceremony celebrates new graduates earning doctoral degrees this academic year. It was held in MIT’s Johnson Athletics Center, where a large audience of family members and friends filled the stands.

MIT professors, clad in the visually brilliant, multihued robes of the universities where they received their own doctorates — including MIT — placed doctoral hoods over students from 26 departments, programs, and centers at the Institute, as well as MIT’s joint program with the Woods Hole Oceanographic Institution.

With most of those graduates in attendance, Callison offered a welcoming sentence — translated as “I am happy for what you’ve all done” — in the language of the Tahltan Nation, an indigenous people of British Columbia, of which she is a member. The audience then repeated the greeting along with her.

In her remarks, Callison reflected on the culture of MIT as well as her own experiences as a doctoral student at the Institute.

“MIT is a place that values not only experimental methods and outcomes in research, but an experimental life,” Callison said, adding that this can include “working hard, taking detours and risks, becoming resilient when things don’t go as planned, taking the scenic route through failures and innovative efforts to define and solve problems.”

She suggested that “there are very few, if any other places, that I think would have had faculty that supported me to do my coursework and research the way I did.”

Callison began her career as a journalist for the Canadian Broadcasting Corporation and CTV News. After eight years in television, she arrived at MIT, where she first pursued a master’s degree in the Comparative Media Studies program, something she termed “an incredible experience.” She then earned her PhD in 2010 from the HASTS program, the joint doctoral group comprising MIT History faculty, the program in Anthropology, and the program in Science, Technology, and Society.

Callison’s doctoral thesis examined the ways knowledge about climate change relates to the social groups in which people live; that PhD research also formed the basis of her 2014 book, “How Climate Change Comes to Matter: The Communal Facts of Life,” published by Duke University Press. Callison is currently an associate professor at the University of British Columbia.

As Callison recounted, she also had two children while a PhD student at MIT — “Just in case you thought I was joking about leading an experimental life” —

which certainly presented challenges when it came to finishing her degree. And, while she noted that “it takes a lot of mettle to succeed” in doctoral studies at MIT, “having a community of others doing what you’re doing really helps.”

Callison also observed that obtaining a PhD at MIT both amplifies the values and ideas that students bring with them to graduate school, and provides them with tools to be used subsequently, at all stages of life.

“I’ve come to think of my time here as one of the best and most formative parts of my journey,” Callison observed, adding: “It’s neither a beginning nor an end.”

“You have made discoveries and created knowledge at a time when society faces grand challenges and urgently needs more understanding, more innovation, and more problem-solving,” Barnhart said, adding that the faculty “feel fortunate to stand with you in applying ‘mens et manus et cor,’ mind and hand and heart, toward building a better world.”

Barnhart also quipped that the ceremony represented a moment of “accomplishment, elation, hope, and, let’s be honest, of relief” for the new doctorate holders, after years of concerted study.

The current format of MIT’s doctoral hooding ceremony represents the revitalization of an venerable tradition. Callison’s speech in 2018 marks the fourth year the ceremony has had a keynote speaker (who thus far has always had an MIT doctorate). Callison was chosen with input from MIT faculty and doctoral students.

The colorful academic regalia of the doctoral ceremony represents an evolving tradition as well. Academic regalia dates at least to the 15th century, but American universities did not codify the standards of graduation gowns and hoods until 1893.

At MIT, doctoral degree robes have featured their current design since 1995. MIT gowns have a silver-gray robe with a striking cardinal red velvet front panel, as well as cardinal red velvet bars on the sleeves. There are additional color markings denoting whether graduates have received a Doctor of Philosophy (PhD) or a Doctor of Science (ScD) degree.

The doctoral hoods themselves are part of the doctoral robe ensemble. After the welcoming remarks by Barnhart and the keynote address by Callison, all doctoral graduates had their names announced as they walked across the stage individually. The new doctoral degree holders then had the hoods draped over their shoulder by their department or program heads.