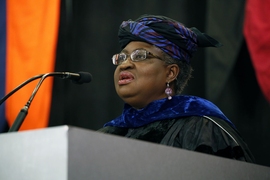 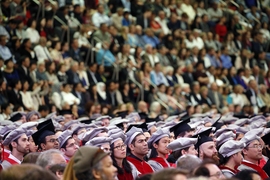 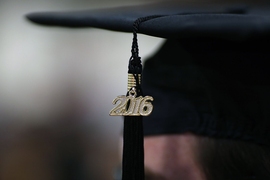 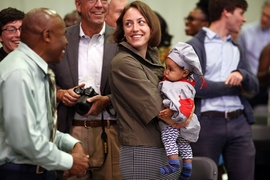 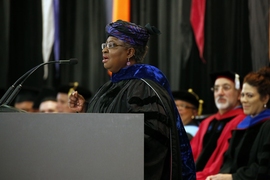 “They are real challenges,” Okonjo-Iweala said. However, she added, “Every challenge presents an opportunity.”

Okonjo-Iweala mixed serious observations about the state of the world with humorous asides, and reminisced about her own time as a graduate student at MIT, where she received a degree in regional economics and development from MIT’s Department of Urban Studies and Planning.

The value of a doctorate from MIT, Okonjo-Iweala suggested, stems not only from the wealth of specific knowledge acquired about a particular field; additionally, “it confers a certain confidence in how to approach problems,” she remarked to the large audience gathered at the Johnson Athletic Center Ice Rink.

Discussing her own professional experiences, Okonjo-Iweala recalled thinking, “If I made it out of MIT with this degree, surely I have the ability to solve these problems.” She cited her own work helping tackle the Asian financial crisis of the late 1990s, and reducing domestic corruption as a government minister in Nigeria, as times when the intellectual tools and systematic analysis from her graduate study particularly helped her professionally.

MIT is awarding 646 doctoral degrees this spring, across all five schools of the Institute.

MIT Chancellor Cynthia Barnhart delivered a welcome address at the ceremony, congratulating MIT’s PhDs on their “journey to achieving the highest level of scholarship” and urging them luck in “solving humanity’s most pressing challenges.”

The event marked the second time MIT’s doctoral hooding ceremony has had a keynote speaker, a new annual tradition at the Institute. The speaker is chosen with input from MIT faculty and doctoral students.

Okonjo-Iweala received her MCP from MIT’s Department of Urban Studies and Planning, and a PhD in regional economics and development. She served at the World Bank for 21 years, as a development economist, vice president, and corporate secretary, before becoming Nigeria’s finance minister in 2003. In 2007, Okonjo-Iweala returned to the World Bank as managing director. She served as Nigeria’s finance minister for a second time from 2011 to 2015, and is currently a senior advisor at Lazard, the global advisory and asset management firm.

The festive ceremony featured faculty wearing a colorful array of robes from the institutions (including MIT) where they themselves earned doctorates. After the remarks by Barnhart and Okonjo-Iweala, all doctoral graduates walked across stage to individually receive their doctoral hoods — a part of the doctoral robe ensemble — from Barnhart and their department or program heads.

MIT adopted the distinctive color scheme for its doctoral degree robe in 1995. The MIT design features a silver-gray robe with a cardinal red velvet front panel, and cardinal red velvet bars on the sleeves. Additional color markings denote whether graduates have received a Doctor of Philosophy (PhD) or a Doctor of Science (ScD) degree.

“I just love the silver-gray,” Okonjo-Iweala observed during her speech, referring to the MIT robes. “We didn’t have that when I graduated.” Turning to Barnhart, she jokingly asked, “Can I have one too?”