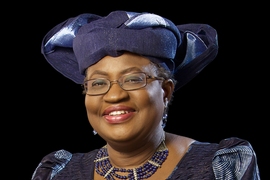 “Dr. Okonjo-Iweala’s leadership on the complex global stage of economics and politics demonstrates the real-world impact of an informed and compassionate scholar. We are honored that she will return to MIT to share that vision of service with our doctoral candidates,” says Barnhart.

The Investiture of Doctoral Hoods ceremony, held the day before Commencement, featured a guest speaker for the first time last year. This new tradition solicits input from MIT faculty and doctoral students, with the aim to invite as guest speaker an MIT alum who can encourage and inspire students as they begin their new careers. “I’m thankful to the faculty and the student committee for their thoughtful recommendations,” says Eric Grimson, chancellor for academic advancement and chair of the Commencement Committee. “This is truly a collaborative effort and I’m delighted that we will all have the privilege of hearing Dr. Okonjo-Iweala speak at such an important moment in the lives of our doctoral candidates.”

Okonjo-Iweala was born in Nigeria and came of age in the late 1960s, enduring the fragmentation of her nation and the horror of civil war. Undeterred in her commitment to continuing her education, Okonjo-Iweala made her way to the United States, where she received her undergraduate degree at Harvard University. She did her graduate work at the Department of Urban Studies and Planning at MIT, receiving an MCP in 1978 and a PhD in regional economics and development in 1981.

After serving 21 years at the World Bank, first as a development economist and later as vice president and corporate secretary, Okonjo-Iweala became Nigeria’s minister of finance in 2003. During her three-year tenure, her influence was key to repositioning Nigeria as a nation in recovery, including initiating negotiations that ended in Western creditor nations acquiescing to cancel $30 billion of Nigerian debt. In December 2007, Okonjo-Iweala returned to the World Bank as managing director, the second-highest position in the organization. In that time, she oversaw the World Bank’s $81 billion operational portfolio in Africa, South Asia, Europe, and Central Asia, and led several World Bank initiatives to assist low-income countries during the 2008-2009 food crisis. In 2010 she successfully chaired the World Bank’s drive to raise $49.3 billion in grants and low-interest credit for the world’s poorest countries. In 2011, love and loyalty for her country called Okonjo-Iweala back to Nigeria, where she served as minister of finance and coordinating minister for the economy, wherein she was responsible for managing the finances of Africa’s largest economy. She left the position in 2015 and is currently a senior advisor at Lazard, a global financial advisory and asset management firm. She is also the chair of the Global Alliance for Vaccines and Immunization.

Okonjo-Iweala has been ranked among the 50 greatest world leaders (Fortune, 2015) and the top 100 most influential people in the world (TIME, 2014). She was awarded the David Rockefeller Bridging Leadership Award in 2014 and the John T. Walker Distinguished Humanitarian Services Award in 2010. “Ngozi is a profound example of the way a leader can transform academic theory into tangible practical results, using knowledge to truly change nations,” says Professor Eran Ben-Joseph, head of the Department of Urban Studies and Planning. “We couldn’t ask for a better example of ‘mind and hand’ at work to inspire our students.”

The 2016 Investiture of Doctoral Hoods will take place on June 2 at 11 a.m. in the Johnson Athletics Center Ice Rink. The ceremony is open to family and friends of doctoral candidates; no tickets are required.