Astronaut and alumnus will be the first-ever speaker at MIT’s Investiture of Doctoral Hoods.
News Office
Publication Date:
Press Inquiries 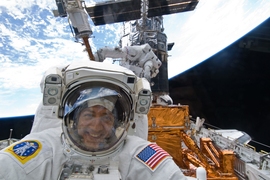 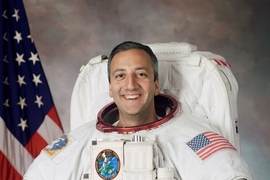 Chancellor Cynthia Barnhart announced today that alumnus Mike Massimino SM ’88, PhD ’92 will be the first-ever guest speaker at MIT’s Investiture of Doctoral Hoods, a ceremony for PhD candidates held the day before Commencement.

“We are thrilled that Dr. Massimino has accepted the invitation to speak on June 4,” says Barnhart, who hosts the hooding ceremony. “His words will motivate and inspire our doctoral candidates as they make this significant transition from student life.”

The 2015 Investiture of Doctoral Hoods takes place Thursday, June 4, at 11:30 a.m. in the Johnson Athletics Center Ice Rink. The ceremony is open to family and friends of doctoral candidates; no tickets are required.

Last fall, on the recommendation of Eric Grimson, chancellor for academic advancement and chair of the Commencement Committee, a proposal to invite a guest speaker was brought to that committee for consideration. Consultation with doctoral students and alumni indicated keen interest in a guest speaker, with preference for an MIT PhD who could speak empathetically to candidates as they complete their doctoral studies and begin their professional careers.

Grimson extended his appreciation to all who participated in the pilot speaker selection process: “I’d like to thank the Commencement Committee, the department heads who submitted nominations, and the doctoral candidate working group for their collaboration to enhance the ceremony. We couldn’t be more delighted with the outcome.”

Massimino earned his undergraduate degree from Columbia University, where he is now professor of professional practice at the Fu Foundation School of Engineering and Applied Science; he worked as a systems engineer at IBM before coming to MIT to begin graduate work. His research as an MIT graduate student in mechanical engineering — on human operator control of space robotics systems — ultimately led to two patents.

After receiving his PhD from MIT in 1992, Massimino worked at McDonnell Douglas Aerospace in Houston as a research engineer, during which time he was also an adjunct assistant professor of mechanical engineering and material sciences at Rice University. In 1995, he became an assistant professor at Georgia Tech’s School of Industrial and Systems Engineering, where he taught human-machine systems engineering and researched human-machine interfaces for space and aircraft systems.

After joining NASA in 1996, Massimino logged more than 570 hours in space, 30 hours of which were on spacewalks; the focus of his two missions was the servicing of the Hubble Space Telescope. He spoke at MIT in 2011 as part of the Institute’s sesquicentennial celebration, and last fall as part of events marking the centennial of the Department of Aeronautics and Astronautics.

Today, Massimino is known for his efforts to make aerospace engineering accessible to the public; at present, he has 1.31 million Twitter followers and a recurring role (as himself) on the CBS sitcom “The Big Bang Theory.”

“Mike’s service to the country during his nearly 20 years at NASA is a credit to MIT and to mechanical engineers everywhere,” says Gang Chen, the Carl Richard Soderberg Professor in Power Engineering and head of the Department of Mechanical Engineering. “His commitment to public education, combined with a distinguished teaching and technical career, is the very best of ‘mens et manus.’ … It will be a great privilege to welcome Mike back to MIT.”