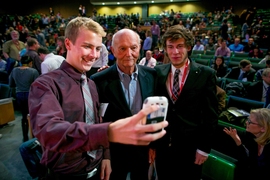 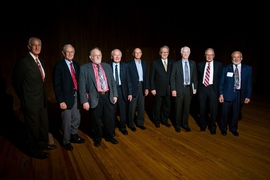 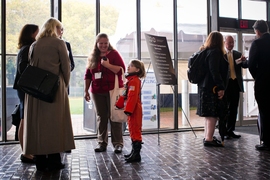 ↓ Download Image
Caption: An aspiring astronaut waits for the next presentation to begin.
Credits: Dominick Reuter 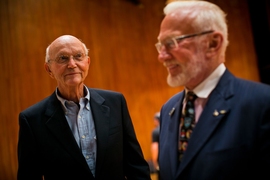 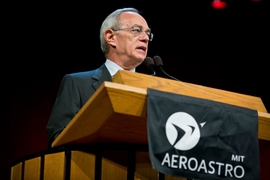 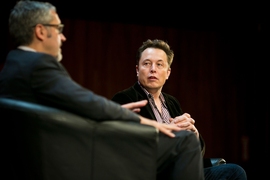 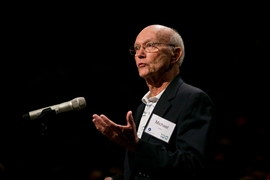 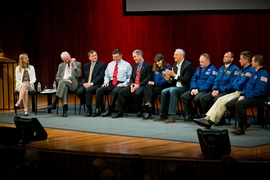 Caption:
An aspiring astronaut waits for the next presentation to begin.
Credits:
Dominick Reuter

On Friday, nine astronauts — all MIT alumni — took to the stage of Kresge Auditorium to celebrate the 100th anniversary of the Department of Aeronautics and Astronautics. The elite corps of explorers reminisced about their unique on-the-job experiences, from day-to-day tasks on the International Space Station to high-pressure exercises, such as the emergency dismantling of a handrail on the Hubble Space Telescope.

Moderator Dava Newman, a professor of aeronautics and astronautics and engineering systems who was nominated last week by President Barack Obama to serve as NASA’s deputy administrator, took a moment to direct a question to the packed auditorium: “Who wants [the astronauts’] job?”

In response, it seemed nearly everyone raised a hand.

Indeed, a recurring theme during AeroAstro’s three-day centennial celebration was the sending of more humans into space — and in particular, the prospect of establishing a human settlement on Mars.

“One hundred years from now, students will be studying the Lewis and Clark-like expedition to Mars,” predicted astronaut Christopher Cassidy SM ’00.

Just as with that 19th-century trek, a journey to the Red Planet would require enormous resources, ingenuity, and a good amount of risk — a point that was raised by another generation of risk-takers: nine Apollo-era astronauts, including Apollo 11 crewmates Buzz Aldrin ScD ’63 and Michael Collins, who reunited at MIT to celebrate AeroAstro’s centennial.

Questions of whether and how humans might establish a Martian colony prompted a spirited discussion among the Apollo astronauts, who debated the merits of carrying out such a monumental mission either through NASA or private companies like SpaceX.

“In the risk-averse society we’ve become, we need to find a way to take a risk … to cross that boundary and go to the next frontier,” Apollo 7 astronaut Walter Cunningham said.

Russell “Rusty” Schweickart ’56, SM ’63, the lunar module pilot for Apollo 9, said the places where risks are now taken — and innovations are made — are in private enterprise.

“When you go today to any gathering of people involved in private space initiatives, the juices are flowing,” Schweickart said. “I mean, it’s a rock concert, man … things are really bubbling.”

On an “upward-sloping sine wave”

One of the rock stars in the commercial space arena was on hand to offer some thoughts on the subject: Elon Musk, founder of SpaceX, was a featured speaker at the event. In a one-on-one conversation with department head Jaime Peraire, the H.N. Slater Professor of Aeronautics and Astronautics, Musk talked about his vision for advancing rocket technology to launch future colonists to Mars.

Toward that goal, he revealed plans to land the company’s Falcon 9 rocket booster on a small, floating platform as soon as December. If the rocket lands safely, it could be a big step toward the development of reusable rockets, which Musk estimates could save 90 percent in launch costs.

“Our pace of innovation is much faster than the big aerospace companies,” Musk said. “That has to be true from a Darwinian perspective, because small companies would die otherwise.”

On the topic of human evolution, Musk advocated for a multiplanetary species, seeing the establishment of a colony on Mars as “insurance” against human extinction on Earth. As aerospace technology continues to improve on an “upward-sloping sine wave,” Musk hopes to jump at the chance to expand to Mars.

“This is the first time this window [to Mars] has been open in the history of Earth,” Musk said. “I hope it will always be open, but it may close.”

The seizing of technological opportunities has been a hallmark of AeroAstro since 1914, when it established the country’s first course in aeronautical engineering.

Since then, the department has had a hand in shaping aerospace milestones, from building the Wright Brothers Wind Tunnel in 1938 — a facility used to test World War II aircraft — to developing the Apollo spacecraft’s guidance, control, and computer systems.

AeroAstro alumni have gone on to lead important aerospace achievements, from the development of the B-2 stealth bomber to the design of the Mars Pathfinder’s laser altimeter.

“AeroAstro at MIT has had a more extraordinary influence on our technology than almost any other institution,” said Tom Crouch, senior curator at the National Air and Space Museum. “MIT has made a fluid transition from air to space, and keeps on going.”

Looking to the future of aerospace, experts at MIT and elsewhere considered the state of aviation, autonomous systems, small satellites, and aeronautical education.

As in space exploration, the aviation industry may benefit from taking a few risks to enable innovations in fuel efficiency, said John Hansman, the T. Wilson Professor of Aeronautics and Astronautics and Engineering Systems.

“We’re sort of a victim of our own success,” Hansman said. “When the system works so well, it’s hard to move off of the design point.”

In the arena of autonomous systems, panelists explored the possibility of airspace and roadways populated with robots.

“There’s a trust element to all these autonomous systems,” said Jonathan How, the Richard Cockburn Maclaurin Professor of Aeronautics and Astronautics. “At what point are you willing to hop in the back seat and let the system drive? How do we convey enough information to the human so they feel comfortable with the system?”

How and his students are working to improve navigation and control of autonomous air and ground vehicles in uncertain environments.

In a conversation revolving around the development of small satellites, David Miller, the Jerome C. Hunsaker Professor of Aeronautics and Astronautics and chief technologist at NASA, pointed to shoebox-sized satellites as express tracks to space.

“It’s access to space on a modest budget,” Miller said. “And they’ve encapsulated risk … if you scramble the yolk inside, you won’t mess up the rest of the vehicle.”

Kerri Cahoy, an assistant professor of aeronautics and astronautics, is designing a constellation of small satellites that will work together to point small mirrors in a configuration to mimic a large space telescope’s mirror. The hope is to deploy such an array in space to detect faraway objects, such as exoplanets.

“It comes down to one of the things MIT is really awesome at, which is using algorithms, clever architecture designs, to get these distributed satellite systems controlled and looking where we want, and discussing amongst themselves,” Cahoy said.

In a panel exploring the future of aeronautical education, Karen Willcox, a professor of aeronautics and astronautics, noted the lofty aspirations and weighty course load of the average MIT student.

“Students are not here just to learn the nitty-gritty of aeronautics, but they also want to change the world,” Willcox said. “How do we help them pack all this into an already-overflowing four-year degree?”

One way, Willcox said, is through the department’s flexible curriculum, 16-ENG, in which students combine a pared-down core of AeroAstro classes with another concentration in, for example, planetary science, or autonomous systems.

While there’s been much emphasis on science, technology, engineering, and math (STEM) education, Apollo 11 astronaut Michael Collins urged the adoption of STEEM, or STEAM — variants of STEM that include English and the arts.

To make his case, Collins invoked Milton’s epic poem, “Paradise Lost.” From a STEM perspective, “It’s about a guy who falls off a cliff,” Collins said. To demonstrate a perspective that takes the humanities into account, Collins recited an excerpt from the poem, prompting a burst of applause.

On Friday, Collins’ modern counterparts — current and recent astronauts — took the stage to talk about life in zero gravity, and historic missions to deliver the Chandra X-Ray Observatory and repair the Hubble Space Telescope.

Franklin Chang-Diaz ScD ’77 recalled receiving that first call from NASA — “I thought it was a joke” — welcoming him into the astronaut corps.

Cassidy remembered his first time stepping out into space — an event that was preceded by an errant drinking straw that escaped the airlock and “disappeared down in the clouds,” Cassidy said. “I remember gripping down and thinking, I don’t want to be that straw.”

Mike Massimino SM ’88, PhD ’92 recounted his most harrowing moment, trying to remove a handrail on the Hubble Space Telescope. The handrail was an obstacle to an instrument that needed repair, but the required tools wouldn’t budge it. Instead, Massimino was instructed to rip the handrail off with brute force — an experience he still describes as “a nightmare.”

As the panel opened the session to questions from the audience, Collins approached the microphone, not with a question, but a comment.

“I’d just like to take my hat off to you guys,” Collins said. “Thank you for doing what you do so beautifully well.”

To make sure the audience didn’t forget its history, Massimino quipped, “You know who that was, right?”

Nidhi Subbaraman of BetaBoston writes about the symposium held in honor of the 100th anniversary of the MIT Department of Aeronautics and Astronautics, highlighting SpaceX CEO Elon Musk’s talk. Musk said that investment in becoming a “multi-planet” species is crucial to the future of humanity.

Steve Brown of WBUR features the Department of Aeronautics and Astronautics’ centennial symposium. Brown reports that during a panel discussion featuring Apollo-era astronauts, the group “took part in a spirited discussion on the future of space exploration.”

Mars One (and done?)