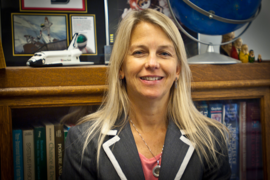 The White House has announced the nomination of MIT’s Dava Newman, professor of aeronautics and astronautics and of engineering systems, as NASA’s deputy administrator, the space agency’s No. 2 leadership position. Newman’s appointment will require approval by the U.S. Senate.

Newman, who has been on the MIT faculty since 1993, is director of MIT’s Technology and Policy Program and MIT Portugal Program, a faculty member in the Harvard-MIT Division of Health Sciences and Technology, and a Margaret McVicar Faculty Fellow.

Newman earned her BS from the University of Notre Dame in 1986, followed by three graduate degrees from MIT: two SM degrees, in aeronautics and astronautics and in technology and policy, in 1989, and a PhD in aerospace biomedical engineering, in 1992. She is the author of “Interactive Aerospace Engineering and Design” (McGraw-Hill, 2002), an introductory engineering textbook, and more than 200 papers presented in journals and at refereed conferences.

Newman’s research has included the development of a radical new spacesuit design that is tighter-fitting and would afford much greater mobility and lighter weight than today’s bulky pressure suits. She has focused on quantifying astronaut performance in space, including computer modeling of the dynamics of human motion in microgravity conditions. Newman has also developed exercise countermeasures, serving as principal investigator for three spaceflight experiments, and specializes in understanding partial-gravity locomotion for future planetary exploration. Her development of patented, wearable compression suits has also led her into research on assistive technologies for people with locomotion impairment.

“It’s very exciting, and an enormous honor,” Newman says of her nomination as NASA’s deputy administrator. “Aerospace engineering, of course, is my passion. Maybe I’ve been training for this my whole life!”

Newman says that NASA has “a clear vision” aligned with goals set by the Obama administration, with Mars as the destination in its long-term strategic plan. While the space program may draw most of the agency’s public attention, NASA’s research in aeronautics is no less significant, she says, and has produced “significant aviation advancements.”

Helping to spur the interest of young people in space, and in engineering in general, will be “a privilege,” Newman says. “I’d like to change the conversation with kids about what it means to be an engineer” — which she calls “the best job in the world, where you get to solve really challenging and extraordinary problems in the service of humankind.”

Newman and her partner Guillermo Trotti, an architect and designer, completed a round-the-world sailing voyage on their boat in 2003. The two are now live-in housemasters at MIT’s Baker House, an undergraduate residence hall.

Newman says she is eager for the challenges of her new job: “I love NASA’s portfolio, and what it’s tasked to do for the nation: pushing the boundaries and leading in aeronautics and space — aircraft, space, planetary and earth sciences, exploration, technology development, and education. I look forward to doing the best work I can, to applying myself 100 percent, to learning a lot, and to advancing our national aerospace goals.”