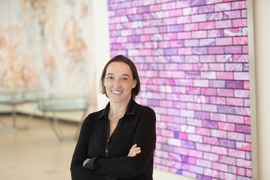 Angelika Amon, an MIT professor of biology, is one of five scientists who will receive a 2019 Breakthrough Prize in Life Sciences, given for transformative advances toward understanding living systems and extending human life.

Amon, the Kathleen and Curtis Marble Professor in Cancer Research and a member of MIT’s Koch Institute for Integrative Cancer Research, was honored for her work in determining the consequences of aneuploidy, an abnormal chromosome number that results from mis-segregation of chromosomes during cell division.

The award, announced this morning, comes with a $3 million prize.

“Angelika Amon is an outstanding choice to receive the Breakthrough Prize,” says Tyler Jacks, director of the Koch Institute and the David H. Koch Professor of Biology. “Her work on understanding how cells control the decisions to divide and the effects of imbalances in chromosome number has helped shape how we think about normal development and disease. Angelika is a fearless investigator and a true scientist’s scientist. All of us in the Koch Institute and across MIT are thrilled by this news.”

Two MIT alumni, Charles Kane PhD ’89 and Eugene Mele PhD ’78, both professors at the University of Pennsylvania, will share a Breakthrough Prize in Fundamental Physics. Kane and Mele are being recognized for their new ideas about topology and symmetry in physics, leading to the prediction of a new class of materials that conduct electricity only on their surface.

Additionally, Chenyang Xu, an MIT professor of mathematics, will receive a 2019 New Horizons in Mathematics Prize for his work in the minimal model program and applications to the moduli of algebraic varieties.

“On behalf of the School of Science, I congratulate Angelika Amon for this extraordinary honor, in recognition of her brilliant work that expands our understanding of cellular mechanisms that may lead to cancer,” says Michael Sipser, dean of the MIT School of Science and the Donner Professor of Mathematics. “We celebrate all recipients of these prestigious awards, including MIT’s four researchers whose impressive early-career achievements in physics and mathematics are being recognized today. Our scientists pursue fundamental research that advances human knowledge, which in turn leads to a better world.”

Amon has spent much of her career studying how this condition affects cells. When aneuploidy occurs in embryonic cells, it is almost always fatal to the organism. For human embryos, extra copies of any chromosome are lethal, with the exceptions of chromosome 21, which produces Down syndrome; chromosomes 13 and 18, which lead to developmental disorders known as Patau and Edwards syndromes; and the X and Y sex chromosomes, extra copies of which may sometimes cause various disorders but are not usually lethal.

In recent years, Amon’s lab has been exploring an apparent paradox of aneuploidy: When normal adult cells become aneuploid, it impairs their ability to survive and proliferate; however, cancer cells, which are nearly all aneuploid, can grow uncontrollably. Amon has shown that aneuploidy disrupts cells’ usual error-repair systems, allowing genetic mutations to quickly accumulate.

A better understanding of the consequences of aneuploidy could shed light on how cancer cells evolve and help to identify new therapeutic targets for cancer. Last year, Amon discovered a mechanism that the immune system uses to eliminate aneuploid cells from the body, raising the possibility of harnessing this system, which relies on natural killer cells, to destroy cancer cells.

Amon, who was informed of the prize several weeks ago, was sworn to secrecy until today’s announcement.

“When I received the phone call, I was driving in the car with my daughter, and it was really hard to not be too excited and thereby spill the beans,” she says. “Of course I am thrilled that our work is recognized in this manner.”

Prof. Angelika Amon, winner of a 2019 Breakthrough Prize, speaks with Nature about her reaction to winning the prize and her research investigating the consequences of a cell having the wrong number of chromosomes. Amon explains that that next big challenge for her work is to “figure out how these changes in copy number affect cancer.”

National Geographic reporter Nadia Drake highlights the work of Prof. Angelika Amon, winner of the 2019 Breakthrough Prize in Life Sciences. “I’m extremely grateful to have been selected,” says Amon. “I’m the representative of all the people who work with me over the years, who this prize is really for—my students and postdocs and trainees, really, they are the winners here.”

Prof. Angelika Amon is honored as one of the recipients of this year’s Breakthrough Prize for her work determining “how extra or missing chromosomes in a person’s genetic makeup can lead to disease,” reports Olivia Vanni for the Boston Herald.

Prof. Angelika Amon is a recipient of this year’s Breakthrough Prize “for her work on aneuploidy, irregularities in the number of chromosomes,” which could lead to a new understanding of cancer, writes Martin Finucane for The Boston Globe. Prof. Chenyang Xu, Prof. Matt Evans and research scientist Lisa Barsotti received New Horizons Prizes in physics, while Prof. Daniel Harlow received one in math.