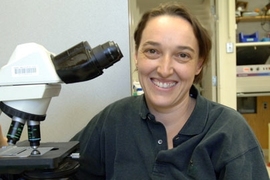 Mammalian cells with extra chromosomes share some common traits that could be exploited to develop cancer treatments, according to MIT biologists.

Having too many chromosomes, a condition known as aneuploidy, wreaks havoc on an organism, usually resulting in birth defects or death. However, it seems to confer an advantage on tumor cells, which are nearly always aneuploid.

Amon and her colleagues have started screening such compounds and already identified one promising candidate.

In this study -- the first to systematically examine the effects of aneuploidy in mammalian cells -- the researchers looked at aneuploidy of four different mouse chromosomes (mice have 20 pairs of chromosomes).

They found that in addition to specific detrimental effects of each extra chromosome, aneuploidy seems to provoke a generalized response in all cells.

The aneuploid cells all divided very slowly, grew too large and displayed other metabolic changes that indicate the cells are under stress and need extra energy to cope with protein imbalances produced by aneuploidy.

"We propose that these cells are chronically stressed," said Amon, who is a member of the David H. Koch Institute for Integrative Cancer Research.

That finding creates a paradox. Aneuploidy seems to give cells a proliferative disadvantage, yet aneuploid tumor cells tend to proliferate rapidly.

There are multiple theories that could explain this apparent paradox, Amon said. One theory is that even though aneuploid cells don't grow very well, they may still grow better than the normal cells surrounding them. As Amon explains it, "the one-eyed man is king in the country of the blind."

Another view, which is Amon's preferred theory, is that aneuploidy puts so much stress on the cell that it starts generating more mutations than normal, eventually driving it to become cancerous.

Lastly, it's possible that aneuploidy doesn't play a role in how cancerous cells develop -- it's just a byproduct of tumor generation.

The research was funded by the Howard Hughes Medical Institute, the Curt W. and Kathy Marble Cancer Research Fund, a David Koch Research Award and a David Koch Graduate Fellowship.