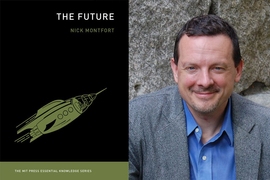 People spend a lot of time trying to predict the future. But shouldn’t we all spend more time trying to influence it? Nick Montfort, a professor in MIT’s Comparative Media Studies/Writing program, examines this question in a book — “The Future” — published this week by the MIT Press. In Montfort’s view, both thinking about the future and developing innovations are important aspects of what he calls “future-making,” the effort to bring positive change to society. MIT News recently spoke with Montfort about his new work.

Q: Your book contends we should not just try to predict the future but actively engage in “future-making.” What does this mean?

A: I’m trying to draw out a variety of principles from different sorts of people, like [computing pioneer] Douglas Engelbart, or Norman Bel Geddes, who designed the Futurama exhibit that was at both New York World’s Fairs, for General Motors, or Alan Kay’s development of personal computing. Whether you’re an entrepreneur or in an established business, an activist, writer, or artist: How have people productively engaged the future? One thing people have done is presented not just an invention or a disruption, but a vision of how new developments can fit into life.

Some future-makers are designing for established corporations. Others are like Edward Bellamy, the author of [the 1888 bestseller] “Looking Backward,” who wrote an incredibly popular book — it was right up there in sales with “Uncle Tom’s Cabin” and “Ben Hur” — that presented a concept for the United States where we would re-organize society. People would be provided for and pursue their interests; people who had undesirable jobs would work fewer hours and people who had desirable jobs would work longer hours. Utopian communities were influenced by things Bellamy wrote about. So I’m looking at people who tried to make the future in different ways. In all cases what they’ve done is not think only about society, or only about inventions, but tried to think systematically about both.

Q: But does that mean future-making, in your vision, is more of an incremental activity, based on specific innovations? Or not?

A: With some future-makers, like Douglas Engelbart, his “Mother of all Demos” [in 1968, which displayed the computer mouse and new keyboard tools alongside hypertext, word processing, videoconferencing, and many other technologies] showed tremendous accomplishments and was very influential. He wasn’t only looking to make incremental changes; he had this longer-term goal about thinking and computing. But he saw a way to do that by making smaller-scale improvements and doing what he called “bootstrapping”: pulling yourself up by your bootstraps and using your own developments to enhance your thinking and ability to invent.

But not everything is incremental like that. You can’t get to the moon by climbing taller and taller trees. … Another important American utopian writer is Charlotte Perkins Gilman, who [wrote about] a utopia where male explorers found an all-female society. The idea was that if we did have a society in which women undertook every role, then what is it that they couldn’t do? What would be a problem here? Would they not be able to build houses? Provide food for themselves? Govern themselves? It was a very effective utopian argument, making the case that we had problems with our thinking — and we still have [those problems]. There are ways to undertake future-making that proceed in a very directed and incremental way, but sometimes it can be very productive even to be a bit absurd and extreme, so that we can expand our imagination and come to better realizations about society.

Q: So some futurists envision social innovations, and others envision technological innovations. But is it fair to say that in this book, Engelbart has a central role, as someone thinking about both spheres?

A: Yes. … When Engelbart died, for the most part the headlines acclaimed him as the inventor of the mouse. Now, when people have their laptops out in a classroom or at a conference, almost no one has a mouse. But that wasn’t at all the point of what Engelbart did. That was one tiny aspect. The development of the mouse was done alongside a special chorded keyboard, which people already forgot long ago, and those interface improvements were all part of a systematic idea about how people could use computers to augment human intellect. If the mouse disappears as an interface device, Engelbart’s influence will still remain as an exceptionally important part of computing history.

There are certainly other digital new-media figures, including [MIT’s] Vannevar Bush, whose ideas influenced Engelbart, and Ted Nelson and Alan Kay, who are still with us. Part of the reason I decided to write about them in this book is that people have regarded them as predictors of the future — “They anticipated personal computing!” — without fully realizing how extensively they actually developed these concepts. Using computing to access information, to organize work with documents, to collaborate — this wasn’t something that was just a prediction.

One thing I like is that Douglas Engelbart’s writing has this utopian tint to it. He’s giving hypothetical examples of what he intends his future system to be like, and he has “Joe,” a scientist, explaining why, in 1962, it’s a good idea for general computer users to be able to program, to adjust the tools in their workshop. So I do think, for me, because of the intersections I see in Engelbart’s work, he’s particularly important. But there’s also a great deal to learn from many other people coming at the future in a lot of different ways.

TechCrunch’s “Technotopia” podcast, hosted by John Biggs, features Prof. Nick Montfort, who has authored a new book, “The Future”. Montfort’s book identifies those whose work impacts the future of culture and technology.

3 Questions: Lisa Parks on drones, warfare, and the media

Changing the face of conservatism in the U.S.