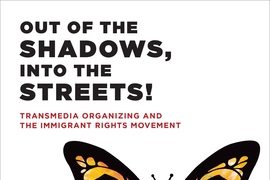 ↓ Download Image
Caption: Cover of "Out of the Shadows, Into the Streets!" (MIT Press), by Sasha Costanza-Chock, an assistant professor of civic media in the Department of Comparative Media Studies/Writing at MIT.
Credits: Courtesy of MIT Press

Caption:
Cover of "Out of the Shadows, Into the Streets!" (MIT Press), by Sasha Costanza-Chock, an assistant professor of civic media in the Department of Comparative Media Studies/Writing at MIT.
Credits:
Courtesy of MIT Press

Nearly a decade ago, Sasha Costanza-Chock — now an assistant professor in MIT’s program in Comparative Media Studies/Writing — volunteered at the Garment Worker Center in Los Angeles, an organization that advocates for the rights of low-wage workers. Activists at the group wanted to inform local garment workers, many of whom are immigrants, about their rights.

To do so, they surveyed workers about which kinds of media or communications they used. Some had cellphones; a few had Internet access. But many workers, especially those instructed not to talk to co-workers on the job, listened to the radio or music at work.

So Costanza-Chock, along with colleagues and workers themselves, produced CDs mixing public service announcements about rights with music, oral histories, poems, and other materials. This way, many of the more than 60,000 garment workers in Los Angeles became better informed about their rights — and, for immigrants, about potential paths to citizenship.

The efforts of the Garment Worker Center were among the many cases in which advocacy groups tried a variety of tools — social media, radio, newspapers, street demonstrations, and more — to organize the nation’s immigrant-rights movement. While the political outcome of the debate remains unclear, the movement has produced unprecedented visibility for the issue, in part because of its diversity of media strategies, according to Costanza-Chock.

“It’s quite rare that a particular tool or platform is the centerpiece of an effective media strategy for a social-movement organization or network,” Costanza-Chock says. “Instead, movements work across many platforms to create strong narratives and symbols that circulate by any media necessary. And increasingly, they invite people to participate in media production as a way of building strong movement identity.”

Now Costanza-Chock has detailed this process in a new book, “Out of the Shadows, into the Streets! Transmedia Organizing and the Immigrant Rights Movement,” published this month by the MIT Press — and appearing just as the immigration-rights issue is making new headlines, given President Barack Obama’s decision to take executive action on the matter last week.

In the book, Costanza-Chock enters into the debate of recent years about the role of new social-media platforms in abetting social and political change — a debate that precedes the Arab Spring uprisings of 2011, but was amplified by them. Some observers have viewed social media as an essential spark for these movements; skeptics have said such platforms fail to create the lasting connections needed to make social movements successful. But Costanza-Chock thinks asking whether social media can build powerful movements is the “wrong question.” Rather, he offers, it is important to look at all of a movement’s organizing activities.

“If what we want to understand is the relationship between social movements and media technology, I think it’s a mistake to start from the technology, to start from the platform,” Costanza-Chock says. “It’s important to engage deeply with a particular social-movement network, if we want to look at all of the different ways people circulate media.”

In conducting his research, as Costanza-Chock makes clear in the book, he worked on several projects that aimed to develop media strategies for immigrant-rights groups, adopting the participatory approach familiar in anthropology. He emphasizes that actually making media — video clips, radio programming, social media messages, posters, newspaper columns — is important in how people start to identify with social movements.

To be clear, Costanza-Chock does not downplay some of the changes brought about by online communications and communities; rather, in his view, he is placing those changes in a broader perspective.

“I will say that I think the Internet has made the diffusion of social-movement tactics more rapid, so people are now able to more quickly see experiments other movements came up with,” he adds.

And some of those tactics get adopted by developing social movements: The immigrant-rights movement, for instance, has used an approach developed by the gay-rights community, in which immigrants “out” themselves as undocumented residents in YouTube videos, Tumblr posts, street signs, and more. In so doing, they are attempting to humanize what can be an abstract debate.

“It’s a real human being saying, ‘It’s me, I’m a person, and if we’re going to have a real conversation, you need to look me in the eye so we can talk about it,’” Costanza-Chock observes.

Costanza-Chock refrains from making predictions about the future of immigration policy in the U.S. But he hopes he can catch the attention of scholars, commentators, activists, and other observers to reinforce the point that the relationship between social movements and media is multifaceted, and that the starting point for understanding that relationship involves grappling with the dynamics of those movements and their organizations.

“At a very basic level, any social movement is a narrative, a story, an idea,” he notes. “It’s a set of ideas about who we are as people, and what types of values we want to see made real in the world.”