Changing the face of conservatism in the U.S. 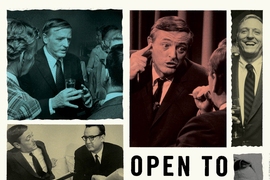 In 1966, when the conservative writer William F. Buckley launched a television talk show, it may not have seemed like a promising endeavor, on the surface.

The show, “Firing Line,” was initially not broadcast on a television network but syndicated to local stations. Even in a lower-tech era, “Firing Line” was low-tech: It simply showed Buckley against a bland backdrop, glass of water nearby, talking for an hour with guests.

Yet “Firing Line” did not just survive on the air for more than three decades; it thrived. Through Buckley, the show became a central platform for the effort of some conservatives to move the Republican Party to the right and, at the same time, bring intellectual respectability and credibility to the conservative movement.

“With ‘Firing Line,’ Buckley forged an appealing mainstream image of right-wing conservatism,” says Heather Hendershot, a professor of film and media in MIT’s Comparative Media Studies/Writing program. Buckley, she adds, showed “that conservatives could be urbane and sophisticated and intelligent, and they weren’t just raving lunatics.”

Hendershot has written a new book about the show, “Open to Debate: How William F. Buckley Put Liberal America on the Firing Line,” released this week by HarperCollins publishers. In it she analyzes the program’s history, dissects Buckley’s views, and makes the case for the program as a “compelling model” of political engagement with opponents, of a kind missing from politics today.

“Firing Line” emerged in the wake of the 1964 presidential election, when Republican nominee Barry Goldwater moved the party to the right, away from its Eisenhower-like moderates, but lost by a landslide to the Democratic president, Lyndon Johnson.

“Goldwater failed miserably in terms of votes but empowered the right-wing Republicans to come forward,” Hendershot says. Buckley’s goal was to establish conservatives as intellectuals — not merely hawks, social reactionaries, or conspiracy theorists — in American life, while maintaining a free-market, strongly anticommunist ideology.

The Republicans regained control of the White House in 1968, thanks to Richard Nixon, but like some others on the right, Buckley frequently found that Nixon was not conservative enough for his taste.

“Almost everything about Nixon was problematic from Buckley’s point of view,” Hendershot observes. “Like so many hard-right conservatives of the time, he was offended that Nixon spent so much on housing and urban development and put money into American domestic programs. They certainly objected to him going to China.”

By contrast, the election of Ronald Reagan in 1980 helped push American politics further right. For Buckley, and other movement conservatives, it was a triumphal time — although it may not have been the peak of “Firing Line” as a program, perhaps because all that political success took an edge off the show’s oppositional frisson.

The numerous visits of Reagan to the program, Hendershot suggests, were “not typically gripping shows,” apart from one extended episode when Buckley and Reagan disagreed about the Panama Canal treaties, a contentious issue of the time.

By contrast, Hendershot — having watched an enormous amount of the show’s archives while researching the book — thinks some of the most gripping “Firing Line” episodes come when Buckley debated feminist leaders. Buckley was, to be sure, a traditionalist about gender roles, Hendershot believes, without being too reflexively opposed to successful women.

“Buckley felt women shouldn’t feel pressure to work if they didn’t want to … but he celebrated smart, powerful, and — especially — conservative women who were in the workplace,” Hendershot says. “He thought strong, talented women would just rise to the top.”

Yet as Hendershot recounts, the noted feminist Germaine Greer, author of “The Female Eunuch,” did so well on the “Firing Line” that Buckley even sent her an admiring letter after one appearance.

Buckley had a seemingly more fraught role in the civil rights debates of the time. In 1957, as Hendershot notes, he had written a controversial piece in The National Review, “Why the South Must Prevail,” that was distinctly skeptical about the civil rights movement.

Yet toward the end of his life, Hendershot recounts, Buckley acknowledged he had been mistaken about the issue, in the sense that “the [federal] government really needed to intervene” to create stronger rights for blacks.

Yet Hendershot concludes that Buckley’s views on race were “much more complicated than [people] would initially think,” something that comes out on “Firing Line” shows where he is interrogating segregationists such as Strom Thurmond and George Wallace.

“They actually were on very different pages,” Hendershot says, adding: “There are all kinds of surprises when you watch the show.” For instance, she adds, “Buckley had sympathy for [the] Black Power [movement] in certain ways, because of its emphasis on personal empowerment, community organizations, and localism” — ideas he saw as consistent with conservative principles, even as some civil rights activists argued that greater integration would not be achieved through such means.

“Firing Line” went off the air in 1999, after 1,429 episodes, and Buckley died in 2008, just as the political landscape was shifting once again. The election of President Barack Obama that year, Hendershot observes, has helped foment a “resurgence of right-wing extremism and conspiratorial thinking” of the kind Buckley once tried to detach from conservatism.

“We are in a moment when the loudest voices seem to be the most extreme,” Hendershot says.

And as strongly as Buckley held to his conservative views, Hendershot thinks, he promoted on “Firing Line” a very different ethos of public debate than the one we have today.

Mickey Edwards of The Los Angeles Times reviews Prof. Heather Hendershot’s book about William Buckley. “Hendershot is clever to have used his 'Firing Line' television show as an introduction to both Buckley and the rise of conservative intellectual opposition to the liberal orthodoxy,” writes Edwards.

In this video, Prof. Heather Hendershot speaks with Mary Kissel of The Wall Street Journal about her new book examining the impact of William F. Buckley’s program the “Firing Line.” “He was the key player in forging a sophisticated, urban, elegant image for right wing conservatism. And that got me interested in him,” Hendershot explains.