Even as it grew in popularity in the postwar years, relatively few scholars studied television: Full of dismal middlebrow fare, from lightweight sitcoms to hokey soap operas, it was seen as far less worthy of critical appraisal than film.

Even so, the immense popularity and apparent power of television made it ripe for analysis blending an examination of shows themselves with the political and economic components of the medium. Enter Heather Hendershot, who since the 1990s has been a prolific author of books and papers about television and politics — work that has helped to decipher our cultural past, and its politics. 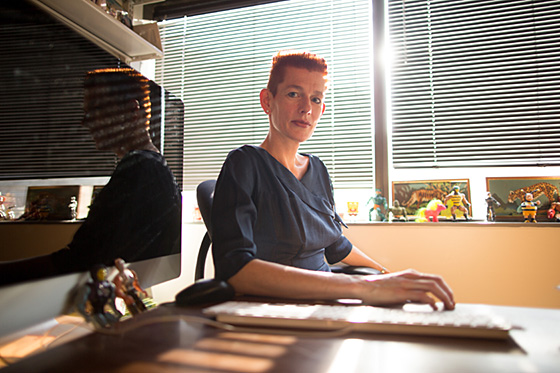 Hendershot’s three books, many papers, and an edited volume have covered topics from censorship of children’s programming to, more recently, in-depth studies of conservative political broadcasts. In unmatched detail, she has traced right-wing media from some of its overtly partisan founders in the 1950s and 1960s to the more refined, professional content developed by groups such as James Dobson’s Focus on the Family organization in the 1990s.

The more polished programming “was part of the modernizing agenda of conservative culture,” says Hendershot, now a professor of film and media studies and the director of graduate studies in MIT’s program in Comparative Media Studies/Writing. Such shows, in effect, broadcast the message that conservatives “were not backward and always trying to censor [programming].”

A key part of this transformation is the subject of Hendershot’s current book in progress: William F. Buckley and his popular public-television talk show, “The Firing Line,” which sought a higher intellectual ground and featured an eclectic range of guests.

“He was interested in debating and allowing ideas to compete with one another,” Hendershot says.

And yet, she notes, a lot of conservative television today has reverted to “fire and brimstone. And it’s effective. Just like a lot of people today would rather see a ‘Transformers’ film than a Japanese art film from the 1950s, they would rather listen to an invigorating radio show that gets you excited and angry.”

Hendershot grew up in Birmingham, Ala., one of the most conservative regions of the country — but in a Quaker family, which set her apart from the culture around her. Quakers weren’t exactly thick on the ground in her hometown: “It was really a minority thing in Birmingham,” she says in an amused tone. “But there were enough for a meeting, which still exists, and now they have a meeting house.”

Hendershot says her surroundings shaped her, primarily in gender terms. “It formed me more as a feminist than as someone interested in conservative culture per se,” she says. “There were all these rules you had to learn [as a woman], a certain way to be proper, and I think that was more important for my political formation.”

Hendershot headed off to Yale University for her undergraduate degree, taking a double major in French and film studies. She then obtained her graduate degrees in film studies at the University of Rochester, which was near the major film archive at George Eastman House, and whose English department was home to some leading feminist film scholars.

While at Rochester, Hendershot says, her interests gravitated toward the politics of television, partly in response to things like Focus on the Family’s protests against the content of shows such as “NYPD Blue.”

“There I was, in a film program that was housed in an English department, studying television,” she notes wryly.

Her first book, based on her doctoral thesis, was “Saturday Morning Censors,” (Duke University Press, 1998), about censorship and children’s television. Her next book, “Shaking the World for Jesus,” (University of Chicago Press, 2004) analyzed media productions ranging from creationist educational films to Christian music videos.

“These broadcasters were very controversial at the time,” Hendershot says. “And yet they’ve completely been forgotten by history.”

At MIT, Hendershot is active in developing new undergraduate and graduate courses, which — for all her interest in television — compel students to study culture and politics across a variety of media. In some cases, that means getting students to dig into silent films, part of an undergraduate course she offered last fall — complete with special screenings for the class, the better for immersive viewing.

“I want you to give [those films] your undivided attention,” Hendershot says. “If we’re watching a Gloria Swanson movie from 1926, I guarantee you no one watched it at home on their lap or in their hand. They were in a movie theater in the dark with other people, and that’s how that text was created to be experienced. I think you can be flexible in the course of doing research, but you need to experience [films] on the big screen — and not email or text while watching. That’s really important.”

For the “Firing Line” project, Hendershot is viewing as many episodes as possible — there were about 1,500 in all, as the show ran from 1966 until 1999 — and digging into corresponding archival evidence.

Hendershot says Buckley had not so much “a disagreement with [his predecessors’] politics, but their style. They seemed backward, they were loud, and they were conspiratorial.” Moreover, she notes, Buckley welcomed a wide range of guests, from Black Panthers and feminist leaders to conservatives.

On balance, Hendershot says, the show was an enormously effective “gateway to conservatism” for viewers, although sometimes Buckley’s opponents scored more points: Muhammad Ali (on Vietnam) and Germaine Greer (on feminism) were among political opponents who were generally perceived to have gotten the better of Buckley in debate.

“He wasn’t changing his mind, but he was interested in the act of engagement with the other side,” Hendershot says. Sounds like a story that will be worth turning off the television to read.