Why researchers should step out of the lab 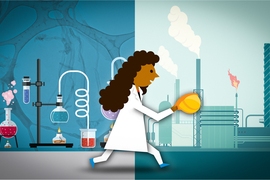 ↓ Download Image
Caption: A new paper describes the importance of doing detailed economic analysis and having in-depth conversations with people using the technology that a research project is focused on.
Credits: Image: Jose-Luis Olivares/MIT. Left background image by Shreya Dave. 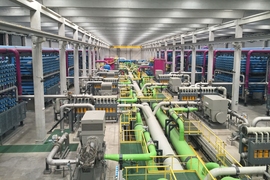 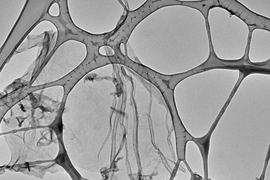 Caption:
A new paper describes the importance of doing detailed economic analysis and having in-depth conversations with people using the technology that a research project is focused on.
Credits:
Image: Jose-Luis Olivares/MIT. Left background image by Shreya Dave.

When Shreya Dave was an MIT doctoral student working on a new kind of filter for desalination plants, she paid a visit to a working reverse-osmosis desalination plant in Spain. She quickly learned an important lesson that she now says she would likely have missed if she’d stayed in the lab.

While much of her research, and that of many other labs, had focused on how to make filter materials that could have a high flow rate at the pressures they would encounter when put into use, her visit to the plant revealed that this permeability was hardly ever a source of operational problems. Instead, problems such as the handling of the filters during removal for cleaning or replacement were what caused delays and added expense, because some of the filters would break if accidentally dropped or mishandled.

The researchers had been trying to solve the wrong problem, she says. Dave, now a research affiliate at MIT and CEO of a startup company working on new filter systems, was able to readjust her research focus and develop a potentially more useful set of applications for her work. But she and her thesis advisor, MIT professor of materials science and engineering Jeffrey Grossman, thought the process they went through might hold important lessons for other researchers about the importance of doing detailed economic analysis and having in-depth conversations with people using the technology that the research is focused on.

Dave, Grossman, and their co-researchers Brent Keller PhD ’16 and Karen Golmer, innovator in residence at MIT’s Deshpande Center for Technological Innovation, have published an account of their experience in this process, using their work on membranes as a case study, in the journal Joule. That paper, Grossman says, is “not about our membrane per se,” though they do discuss the details of its development, but rather it is “our story of bridging the gap between the research and how to commercialize it.” Grossman is the Morton and Claire Goulder and Family Professor in Environmental Systems.

Dave and Grossman were working on a new approach to desalination by using sheets of specially prepared graphene oxide, which they showed could improve the flow rate through the filter by a hundredfold compared to conventional polymer membranes. That sounded like something that could have a major impact on the efficiency and cost of this expensive process, which is a key source of potable water in many arid parts of the world.

But after conducting 200 interviews with people working in various parts of the desalination industry — a process that was required as part of a National Science Foundation I-Corps grant for the project — the team found that the reality was not so simple. Estimated costs for the new membrane material would represent at least a 50 percent increase over that of existing membranes, when the total costs of plant operation were taken into account. Meanwhile, using the new material would lead to only an estimated 15 percent improvement in output — a finding that was published by Grossman previously with Dave and another former student, David Cohen-Tanugi, in collaboration with Professor John Lienhard and his former student Ronan McGovern. In short, the possible savings from that application were insufficient to justify a major change in a highly risk-averse industry.

Since the initial proposals for using graphene as a desalination filter appeared in 2012, there has been an explosion of research in the area, with a 2,500 percent increase in research papers on the subject through 2016. Some of these papers, including the MIT team’s, explored the use of graphene oxide, which can be made (at laboratory scales) for about $15 per square meter, but many of them instead focused on pure graphene, produced by a chemical vapor deposition (CVD) process, which at present would cost an estimated $80,000 per square meter. Since present filters cost about $10 per square meter, the CVD graphene research appears to be economically impractical for commercial use for desalination. Yet many of those papers cited “scalability” of their findings, without including detailed analysis of actual costs, Dave and Grossman found.

A combination of what is known as techno-economic analysis, along with the extensive interviews, led the MIT team to a whole different area of applications. They found that a different set of industrial-scale processes, for chemical and petroleum separation processing, could actually benefit much more from the use of their graphene oxide filters than the desalination industry could.

Chemical separation processes, for example distillation and evaporation, account for 12 percent of the total energy use in the U.S., they learned. But using a filter instead of the traditional processes, the team found, could eliminate 90 percent of that energy use.  And because of their customer contacts and economic assessment, they think their graphene oxide filter could have a big impact. They have now formed a company called Via Separations, of which Dave is CEO and Grossman is the chief scientific officer, to commercialize the material for use in these chemical processes. Keller is the company’s CTO, and Golmer its head of business development. The company recently won funding from MIT’s The Engine, which was founded to help bring transformative technologies from the lab to the marketplace.

One of the key lessons learned from the long process they went through, Dave says, was the importance of looking beyond the specific piece of the puzzle that they were focused on in their laboratory research. “In industry, they don’t care about individual components. They’re looking at whole systems,” she says.

By “getting out of the trenches, you really do find out where their challenges are,” Grossman says. “You learn a lot from that experience that’s not out there in the literature, and it was essential in allowing us to go from computer simulations to commercial spinout in five years.”

That was the case, for example, with the research on membrane materials for desalination. Then Dave’s visit to the plant revealed that a big concern is their vulnerability to shattering if dropped during installation or replacement processes. “Nobody publishes papers about dropping [the filters] as an issue,” Dave says.

Carrying out 100 interviews (the number required by I-Corps) might sound like a time-consuming burden, but Dave says it was actually very manageable. Even the 200 interviews the team ended up doing added up to about seven weeks. “It was a very valuable part of my PhD work,” Dave says.

The point of detailing their experiences, Grossman says, is not about promoting their membrane technology. “We didn’t develop the tools” for techno-economic analysis, “or the idea of talking to people in industry. What we did is we shared our own story, in hopes it has some value to other academic researchers.”

In addition to the National Science Foundation, the project was supported by the Deshpande Center for Technological Innovation, the Abdul Latif Jameel World Water and Food Security Lab (J-WAFS) at MIT, and The Engine. The company, Via Separations, has won an SBIR Phase I grant and aims to have prototype separation systems in place for real-world testing within a year.

Desalination gets a graphene boost

A new approach to water desalination