Caption:
Jeffrey Grossman
Credits:
Photo: M. Scott Brauer
Jeffrey Grossman says Cambridge has a better climate than California — for carrying out materials science research, that is. That’s why Grossman decided, two years ago, to make the move from the University of California at Berkeley to a position at MIT.

“I really don’t like sunshine that much,” he says, in a wry tone that clearly suggests otherwise: It was the innovative climate inside the halls of MIT, not the frigid weather outside, that drew him here. 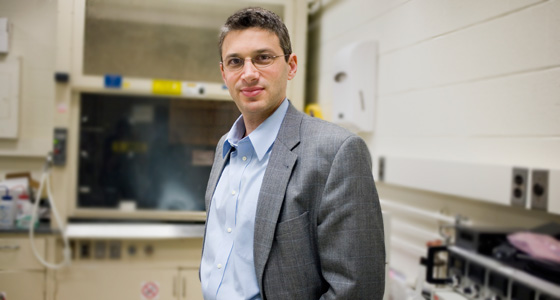 Grossman hadn’t been to Cambridge prior to the move, but there was some family history here: His father, Neal, now an associate professor of philosophy emeritus at the University of Illinois at Chicago, is an MIT alumnus (SB ’63). “I have his slide rule,” Grossman says, “that was given to him by his uncle, who was also an MIT alum.”

Growing up in suburban Evanston, Ill., Grossman says he decided very early on that he wanted to study physics when he got to college. “It was those mysteries that physics could answer that attracted me,” he recalls. “This was very exciting to me.”

He pursued that ambition, majoring in physics at Johns Hopkins University, and then continuing his studies at the University of Illinois at Urbana-Champaign, where he earned his doctorate in computational physics. He accepted a postdoc position in physics at Berkeley, “and I knew I wanted to move more toward applied physics,” he says. “I love physics, but what excites me the most are those intersections between engineering and science.” He soon decided that materials science was exactly the right field in which to pursue his research vision.

Grossman also decided that energy, in particular, presented “the perfect combination of a global-scale problem that we face, that happens to need — at its core — new materials,” he says. “And we’re also at a point where we can predict and make new materials as never before. I don’t know if we’ve ever had a challenge this big that faces us, where the answer really is in the design of new materials.”

Putting a move on

Although he and his wife, Katherine Moschandreas, graduated from Evanston Township High School together, Grossman says, they never knew each other at the school. It was only at their 10th reunion that they finally met: She was living in Cambridge (having earned two master’s degrees from Harvard University) but was about to move to Berkeley, where he was then a postdoc. They began dating soon after she moved, were married soon after that, and now have three children (ages 8, 7 and 3).

Grossman says that as a graduate student and postdoc, he found it important to have outside interests that could provide a different kind of focus. For him, that came in the form of competitive ballroom dancing, which he pursued seriously throughout those years.

“When you go dancing and look around, everyone is smiling. No one dances and is not having fun,” he says. It’s a good outlet, he adds, because “it’s something that’s not work, but it requires quite a bit of concentration. That kind of balance between my work and other interests actually allows me to be more productive and more creative. But a balance doesn’t come easy — you have to work to maintain it.” 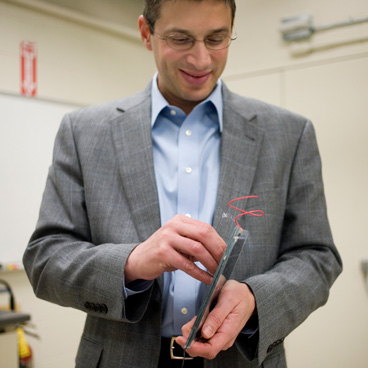 Photo: M. Scott Brauer
In 2009, Berkeley offered him a faculty appointment — and so did MIT. Much as he enjoyed his work in California, he says, “Professionally, I had never seen a place like MIT, where people are so problem-driven. It’s not just materials scientists — in all the departments, everyone I meet, everyone is cross-disciplinary, working on both the practice and the theory. This is where people, and I mean everyone — from the undergraduate students to graduate students, postdocs, staff scientists and faculty — are the most driven I’ve ever seen to solve hard problems together.”

So it became an easy choice for him, and he joined MIT in fall 2009. “It’s a thrill to be here, because of that culture and that environment. … If you want to try to change the world and make it better with science and engineering, this is just a really unique place,” he says.

Grossman, who was awarded tenure this year and is now the Carl Richard Soderberg Associate Professor of Power Engineering, has continued his research on developing and applying computational techniques to understand and design new materials at the scale of atoms and electrons, mostly for energy applications. For example, he and one of his postdocs recently showed how a particular material can collect solar energy in a form that can be stored indefinitely by changing the molecule’s configuration, and then release that energy on demand by snapping back to its original form in response to a small nudge such as an increase in temperature.

Grossman has also created a balance between his group’s computational predictions and practical demonstrations of those ideas. For example, he leads a new team at MIT working to make efficient, quantum-dot-based solar cells. He and his students are also arranging solar panels in three-dimensional shapes to increase the power produced over the course of a day and smooth out its variability, and are in the process of building full-scale prototypes of such systems on a rooftop at MIT.

Grossman’s work extends beyond new energy technologies into other areas, such as designing environmentally sustainable concrete and producing clean water. “One of the advantages of the kinds of simulations we do is that the same methods can be used to impact diverse technological challenges,” Grossman explains. “For example, since we study how electrons move through materials, and how this controls key properties that limit the material’s performance, we can tackle old problems … in new ways.”

Whether simulating new materials solutions or fostering collaborations among his MIT students and colleagues, it seems that moving from California to Cambridge has sharpened Grossman’s resolve to make the most out of every precious hour of sunlight.