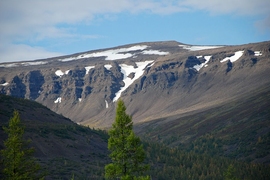 ↓ Download Image
Caption: In a paper published today in Nature Communications, Geologists from the U.S. Geological Survey and MIT report that about 251.9 million years ago, a huge pulse of magma rose up through the Earth, in a region that today is known as the Siberian Traps. 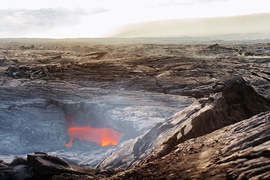 ↓ Download Image
Caption: In a paper published today in Nature Communications, Geologists from the U.S. Geological Survey and MIT report that about 251.9 million years ago, a huge pulse of magma rose up through the Earth, in a region that today is known as the Siberian Traps.

Caption:
Geologists report that about 251.9 million years ago, a huge pulse of magma rose up through the Earth, in a region that today is known as the Siberian Traps.

Geologists from the U.S. Geological Survey and MIT have homed in on the precise event that set off the end-Permian extinction, Earth’s most devastating mass extinction, which killed off 90 percent of marine organisms and 75 percent of life on land approximately 252 million years ago.

In a paper published today in Nature Communications, the team reports that about 251.9 million years ago, a huge pulse of magma rose up through the Earth, in a region that today is known as the Siberian Traps. Some of this molten liquid stopped short of erupting onto the surface and instead spread out beneath the Earth’s shallow crust, creating a vast network of rock stretching across almost 1 million square miles.

As the subsurface magma crystallized into geologic formations called sills, it heated the surrounding carbon-rich sediments and rapidly released into the atmosphere a tremendous volume of carbon dioxide, methane, and other greenhouse gases.

“This first pulse of sills generated a huge volume of greenhouse gases, and things got really bad, really fast,” says first author and former MIT graduate student Seth Burgess. “Gases warmed the climate, acidified the ocean, and made it very difficult for things on land and in the ocean to survive. And we think the smoking gun is the first pulse of Siberian Traps sills.”

Getting to extinction’s roots

Since the 1980s, scientists have suspected that the Earth’s most severe extinction events, the end-Permian included, were triggered by large igneous provinces such as the Siberian Traps — expansive accumulations of igneous rock, formed from protracted eruptions of lava over land and intrusions of magma beneath the surface. But Burgess was struck by a certain incongruity in such hypotheses.

“One thing really stuck out as a sore thumb to me: The total duration of magmatism in most cases is about 1 million years, but extinctions happen really quickly, in about 10,000 years. That told me that it’s not the entire large igneous province driving extinction,” says Burgess, who is now a research scientist for the U.S. Geological Survey.

He surmised that the root cause of mass extinctions might be a shorter, more specific interval of magmatism within the much longer period over which large igneous provinces form.

Digging through the data

Burgess decided to re-examine geochronologic measurements he made as a graduate student in the lab of Samuel Bowring, the Robert R. Shrock Professor of Geology in MIT’s Department of Earth, Atmospheric and Planetary Sciences.

In 2014 and 2015, he and Bowring used high-precision dating techniques to determine the timing of the end-Permian mass extinction and ages of ancient magmatic rocks that the team collected over three field expeditions to the Siberian Traps.

From the rocks’ ages, they estimated this magmatic period started around 300,000 years before the onset of the end-Permian extinction and petered out 500,000 years after the extinction ended. From these dates, the team concluded that magmatism in the Siberian Traps must have had a role in triggering the mass extinction.

But a puzzle remained. Even while lava erupted in massive volumes hundreds of thousands of years prior to the extinction, there has been no evidence in the global fossil record to suggest any biotic stress or significant change in the climate system during that period.

“I realized the oldest sills out there correspond, bang-on, with the start of the mass extinction,” Burgess says. “You don’t have any negative effects occurring in the biosphere when you’ve got all this lava erupting, but the second you start intruding sills, the mass extinction starts.”

Based on his new observations of the data, Burgess has outlined a refined, three-stage timeline of the processes that likely triggered the end-Permian extinction. The first stage marks the start of widespread eruptions of lava over land, 252.2 million years ago. As the lava spews out and solidifies over a period of 300,000 years, it builds up a dense, rocky cap.

The second stage starts at around 251.9 million years ago, when the lava cap becomes a structural barrier to subsequent lava eruption. Instead, acending magma stalls and spreads beneath the lava cap as sills, heating up carbon-rich sediments in the Earth and releasing huge amounts of greenhouse gases to the atmosphere — almost precisely when the mass extinction event began. “These first sills are the key,” Burgess says.

The last stage begins around 251.5 million years ago, as the release of gases slows, even as magma continues to intrude into the sediments.

“At this point, the magma has already degassed the basin of most of its volatiles, and it becomes more difficult to generate large volumes of volatiles from a basin that’s already been cooked,” Burgess explains.

A culprit for other extinctions?

Could similarly short pulses of sills have triggered other mass extinctions in Earth’s history? Burgess looked at the geochronologic data for three other extinction events which scientists have found to coincide with large igneous provinces: the Cretaceous-Plaeogene, the Triassic/Jurassic, and the early Jurassic extinctions.

For both the Triassic/Jurassic, and the early Jurassic extinction events, he found that the associated large igneous provinces contained significant networks of sills, or intrusive magma, emplaced into sedimentary basins that likely hosted volatile gases. In these two cases, the extinction trigger might have been an initial short pulse of intrusive magma, similar to the end-Permian.

However, for the Cretaceous-Paleogene event — the extinction that killed off the dinosaurs — Burgess noted that the large igneous province that was erupting at the time is primarily composed of lavas, not sills, and was erupted into granitic rock, not a gas-rich sedimentary basin. Thus, it likely did not release enough greenhouse gases to exclusively cause the dinosaur die-off. Instead, Burgess says a combination of lava eruptions and the Chicxulub asteroid impact was likely responsible.

The paper’s co-authors are Bowring and J.D. Muirhead, of Syracuse University. The research was supported, in part, by a U.S. Geological Survey Mendenhall Postdoctoral Research Fellowship, which was awarded to Burgess.

A new study co-authored by MIT researchers finds that underground magma triggered the world’s largest mass extinction, reports Howard Lee for The Guardian. Based off their findings, the researchers believe that, “greenhouse gas emissions triggered by magma intrusions...caused the extinction through abrupt global warming and ocean acidification.”

Wired reporter Sian Bradley writes that a study co-authored by MIT researchers shows that the world’s largest mass-extinction was triggered by a massive underground magma pulse. The magma pulse “released dangerous levels of carbon dioxide, methane and sulphur dioxide into the environment and triggered the end of the Permian period.”

In the blink of an eye