Tracking the spread of bird flu 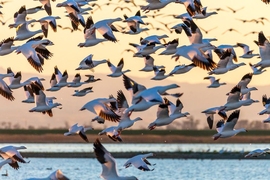 ↓ Download Image
Caption: A new paper from an MIT-led team demonstrates that Alaska can offer a significant foothold for Asian flu viruses, enabling them to enter North America.

Caption:
A new paper from an MIT-led team demonstrates that Alaska can offer a significant foothold for Asian flu viruses, enabling them to enter North America.

A new paper from an MIT-led team demonstrates that Alaska can offer a significant foothold for Asian flu viruses, enabling them to enter North America. The research also shows that the region serves as a fertile breeding ground for new flu strains.

In 2014 and 2015, an outbreak of H5N8, H5N1, and H5N2 influenza affected poultry farms in North America, resulting in the culling of nearly 50 million chickens and turkeys. The new study finds that an epidemic flu strain, which originated in Southeast Asia, was most likely carried into Alaska by wild migratory birds. In Alaska, the viruses mingled with local flu strains and eventually evolved into the deadly strains that spread south to poultry farms in Washington, Oregon, and California.

“We think there’s strong evidence that those viruses moved through the Bering strait through wild bird populations and began a process of evolution that ended up with them infecting poultry populations and becoming a big agricultural issue,” says Jonathan Runstadler, an assistant professor of biological engineering and comparative medicine at MIT and the senior author of the study.

The paper’s lead author is MIT postdoc Nichola Hill. Researchers from the U.S. Geological Survey, the University of Alaska at Fairbanks, Vanderbilt University Medical Center, the J. Craig Venter Institute, the U.S. Department of Agriculture, and the University of California at Davis also contributed to the study.

Influenza strains come in many subtypes, which are classified by the structure of two proteins (abbreviated H and N) found on the surface of their viral envelope. In 1997, an outbreak of H5N1 that began in birds infected 18 people in Hong Kong and killed six of them. The virus then re-emerged in southeast Asia in the early 2000s, killing many birds and causing small pockets of human disease.

Alaska hosts huge flocks of migratory waterbirds, such as ducks, geese, and gulls, which fly north from both Asia and southern regions of North America. “Water birds spread virus easily, and a lot of these birds migrate intercontinentally. They make a great host for influenza viruses,” Hill says.

This intermingling of birds gives flu viruses a chance to undergo a process called genetic reassortment, which allows them to develop new traits such as the ability to infect a different host. Flu viruses have eight genetic segments that are independent and unattached, and when two different viruses infect the same host, they can swap segments.

“The virus then comes out of that cell with the mixture of the two viruses,” Runstadler says. “This reassortment seems to be a major mechanism by which the influenza virus can move between different hosts.”

Runstadler and Hill have previously shown that reassortment occurs in wild birds in Alaska during the breeding season, and that the process occurs at an even greater frequency as the birds move south. This led them to hypothesize that Alaska could be the entry point for highly pathogenic H5 viruses from Asia, and that these viruses could diversify and spread south into the United States.

The researchers got the chance to test this hypothesis after the U.S. poultry outbreak began in late 2014. The MIT team and another group from the University of Alaska at Fairbanks and the USGS had taken taken flu samples from wild birds in 2014 as part of a larger project on flu virus evolution. After the poultry outbreak began, the researchers went back to their samples to try to determine whether they were predecessors to the viruses that caused the poultry sickness.

Analyzing these sequences and comparing them with viruses taken from birds infected at lower latitudes of North America revealed that the virus had come into Alaska from southeast Asia. Once the virus arrived in Alaska, it began swapping genes with less harmful flu viruses already present in the Alaskan wild bird population.

“As the highly pathogenic H5 virus entered into North America, along the way it reassorted with locally circulating, less pathogenic strains from North American wild birds,” Hill says. “We’ve been able to understand the trajectory of how the virus moved in and reassorted by looking at the strains that these birds in Alaska were shedding.”

This genetic reassortment allowed the flu strains to diversify in ways that made it easier for them to spread among the wild bird population and eventually infect poultry as the wild birds migrated south.

“This data is very important to our understanding of flu evolution and shows the importance of timely sampling in surveillance,” says Ralph Tripp, a professor of infectious diseases at the University of Georgia’s College of Veterinary Medicine, who was not involved in the research.

The researchers say that the study highlights the need for surveillance of potentially dangerous flu strains that could enter through Alaska and spread south. Such strains could pose a threat to not only agricultural operations but also human heath, because viral reassortment can make it easier for the virus to spread among people.

“I think it’s fair to say that the circulation of H5 viruses anywhere is cause for concern because of the fact that the influenza virus can do this reassortment,” Runstadler says. “If one of these viruses that was circulating in North America, or one of the ones still circulating in Asia, happened to be able to infect a person who is also sick with a seasonal H1N1 virus, you’d have some concern that those viruses would reassort and you might get a novel virus produced that is able to transmit between humans and could be a public health risk.”

The researchers also plan to investigate how human activities, such as urbanization and agriculture in Alaska and elsewhere in North America might influence the flu virus’ ability to evolve and infect new hosts by changing the distribution and susceptibility of wild birds.

“Humans have used and altered landscapes that provide food sources for populations of birds, and affected migration patterns,” Runstadler says. “We don’t know enough about influenza virus to say what’s really a risk and what’s not. That’s one reason why we do what we do, to try to figure that out better.”

Improving prevention of and responses to flu outbreaks