Study: Preschoolers learn from math games — to a point 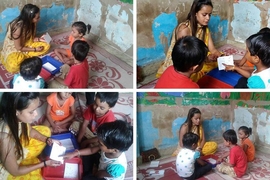 What is the best way to help poor schoolchildren succeed at math? A study co-authored by researchers at MIT, Harvard University, and New York University now sheds light on the ways preschool activities may — or may not — help children develop cognitive skills.

The results contained an unexpected wrinkle. Children participating in the math games did retain a superior ability to grasp those concepts more than a year later, compared to children who either played only the social games or did not participate. However, the exercises did not lead to better results later, when the children entered a formal classroom setting.

“It’s very clear you have a significant improvement in the math skills” used in the games, says Esther Duflo, the Abdul Latif Jameel Professor of Poverty Alleviation and Development Economics at MIT and co-author of the study. “We find that the gains are persistent … which I think is quite striking.”

However, she adds, by the time the children in the study were learning formal math concepts in primary school, such as specific number symbols, the preschool intervention did not affect learning outcomes.

“All the kids [in primary school] had learned, but they had learned [those concepts] equally,” says Duflo, who is a co-founder of MIT’s Abdul Latif Jameel Poverty Action Lab (J-PAL), which conducts field experiments, often in education, around the globe.

A paper detailing the results of the study, “Cognitive science in the field: A preschool intervention durably enhances intuitive but not formal mathematics,” is being published today in the journal Science.

The authors are Duflo; Moira R. Dillon, an assistant professor in New York University’s Department of Psychology; Harini Kannan, a postdoc at J-PAL South Asia; Joshua T. Dean, a graduate student in MIT’s Department of Economics; and Elizabeth Spelke, a professor of psychology and researcher at the Laboratory for Developmental Studies at Harvard University.

The results bear on the question of how early-childhood educational interventions can help poor children access the same educational concepts that more privileged children have before entering primary school.

Spelke, an expert in cognitive development among children, notes that around age 5, children “transition from developing knowledge in a common-sense, spontaneous manner, to going to school, where they have to start grappling with formal subjects and building formal skills.” She adds that this can be a highly challenging transition for children living in poverty whose parents had no schooling themselves.

To address that, the researchers developed a field experiment involving 1,540 children, who were 5 years old on average and enrolled in 214 Indian preschools.

Roughly one-third of the preschool children were put in groups playing math games exposing them to concepts of number and geometry. For instance, one game the children played allowed them to estimate numbers on cards and sort the cards on that basis.

Another one-third of the preschool children played games that focused on social content, encouraging them to, for instance, estimate the intensity of emotional expressions on cards and sort the cards on that basis. In all, the games were “fun, fast-paced, and social” and “encouraged a desire to play together,” Dillon says.

Meanwhile, the final one-third of the preschoolers had no exposure to either type of game; these children formed another control group for the study.

The researchers then followed up on the abilities of children from all three groups, soon after the intervention, as well as six and 12 months later. They found that even after the first year of primary school, children who had played the math games were better at the skills that those games developed, compared to children from the other groups. The intervention using social games had effects on social skills but did not produce a comparable effect on math skills; the effects of the math games were specific to their math content.

Despite these effects, the early exposure to numerical concepts such as one-to-one correspondence, and geometrical concepts such as congruence and parallelism did not produce an advantage for the first group of students when it came to achievement in primary school. As the paper states, “Although the math games caused persistent gains in children’s non-symbolic mathematical abilities, they failed to enhance children’s readiness for learning the new symbolic content presented in primary school.”

The researchers have been analyzing why the intervention did not produce improvements in school results. One possibility, Duflo observes, is that children in Delhi primary schools learn math in a rote style that may not have allowed the experiment’s set of games to have an effect. Kids in these schools, she observes, “are [only] learning to sing ‘1 times 1 is 1, 1 times 2 is 2.’” For this reason, Duflo notes, the greater understanding of the concepts provided by the preschool math games might be more beneficial when aligned with a different kind of curriculum.

Or, Spelke puts it, “the negative thing that we learned” from the study is that lab work is not necessarily “sufficient to establish what actually causes knowledge to grow in the mind of a child, over timespans of years in the environments in which children live and learn.”

With that in mind, the research team is designing follow-up studies in which the games will segue more seamlessly into the curriculum being used in a particular school district.

“We want to include in the games themselves some element of bridging between the intuitive knowledge of mathematics and the formal knowledge they will be actually exposed to,” Duflo says. J-PAL is currently engaged in developing projects along these lines in both India and the U.S.

The larger goal of helping disadvantaged preschool children remains intact, Duflo emphasizes: “If we could take the poorest kids and instead of sending them to school with a [learning deficit], because they haven’t been to preschool or been to very good preschools, or their parents have not been able to help them out in the schoolwork, why couldn’t we try to use the best cognitive science available and bring them to school with a slight advantage?”

Boston Globe reporter Jeremy Fox writes about a new study by MIT researchers examining whether math games can be beneficial in helping children learn. The researchers found that, “children who played math games consistently showed a better grasp of the concepts…but that understanding did not appear to help in elementary school.”