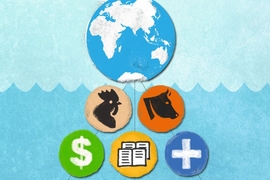 An anti-poverty program tested extensively on three continents has produced sustained gains in individuals’ income, wealth, and well-being, according to a study published today in the journal Science.

The program provides very poor people with productive assets, such as livestock, as well as job training, life-skills coaching, and health information. Known as the “Graduation” program, its intention was to examine whether helping the poor in multiple ways simultaneously could be especially effective in fighting poverty.

“The results show that three years after the intervention, hunger is down, consumption is up, and income is up,” says Abhijit Banerjee, the Ford Professor of International Economics at MIT, and a co-author of the paper detailing the findings.

The “Graduation” program was targeted at substantial groups of very poor citizens in Ethiopia, Ghana, Honduras, India, Pakistan, and Peru; about 48 percent of households in the experiment had daily per capita consumption of less than $1.25. While the welfare of recipients was expected to increase in the short run, those gains proved durable.

“It seems to be an improvement that happens and stays intact,” Banerjee says, noting that the self-reported mental health of participants improved as well: “They are happier, too.”

There are nine co-authors of the Science paper, including Banerjee and Esther Duflo, co-founders of MIT’s Abdul Latif Jameel Poverty Action Lab (J-PAL). The paper’s corresponding author is Dean Karlan, a development economist at Yale University and a member of J-PAL’s executive committee.

J-PAL was founded in 2003 and named in 2005 after the father of MIT alumnus Mohammed Abdul Latif Jameel ’78, whose substantial gift to the lab greatly expanded the scope of its activities.

The study examined results from 21,063 adults in 10,495 rural households. The “Graduation” program concept was first used deployed in Bangladesh by a large non-governmental organization known as BRAC. As the paper notes, the idea was to provide the poor with a “big push” intended to alleviate poverty.

“The intellectual impetus came from asking the question: Can we have durable consequences from a one-time intervention into the lives of the poor?” Banerjee says.

The “Graduation” program gave participants a one-time asset transfer, often providing people with animals, such as cows or chickens, from which they could earn income. It supplemented that asset donation with temporary spending support; training on running a business; frequent home visits from project staff; and information about health care. Participants were also encouraged to save money.

Some specifics were tailored to each country, but in each case, participants’ results were compared to those of people with similar income levels who did not take part in the project. The wealth gains were observed in five of the six countries; only Honduras was an exception.

“The overall bottom line is that the program appears to be effective in most places,” the authors write in the Science paper.

“A battle that could be won”

The “Graduation” project has also produced a number of questions the researchers hope to explore. Some pertain to costs; the program is intensive, with home visits and personalized coaching. Future variations, Banerjee notes, may modify some elements of the program, to see if the same outcomes can be achieved at lower cost.

For now, Banerjee thinks the experiment has demonstrated that the world’s poorest people are not inherently incapable of improving their own lives.

“We wanted to show it’s a battle that could be won,” Banerjee says.

Funding for the project was provided by the Ford Foundation, 3ie, and the U.S. Agency for International Development.

A study conducted by Prof. Esther Duflo found that when women were offered financial support through livestock and educational training, they were able to climb out of poverty, according to The Economist. “Seven years after the programme began their average monthly consumption was almost one-third higher than it had been after two years.”

Wall Street Journal reporter Jason Zweig writes about anti-poverty research, highlighting an MIT study that showed intervention methods can be effective at alleviating poverty. Prof. Esther Duflo says that, “We are trying to promote a culture of learning that will permeate governments and NGOs and businesses to such an extent that it will become par for the course.”

Tina Rosenberg writes for The New York Times about a study by J-PAL researchers examining the effectiveness of a poverty intervention program.  Researchers found that participants in the program, “ate more, were more certain about access to food, held more assets, had more income and savings, spent more time working, and enjoyed better mental and physical health.”

A new study by MIT researchers has found that anti-poverty intervention methods can be effective, reports Carolyn Johnson for The Boston Globe. Interventions resulted in “fewer skipped meals, more income from livestock and farming, and a durable, though small, increase in how much they consume each day.”