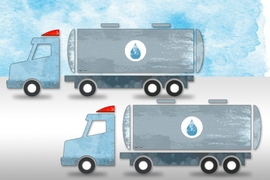 ↓ Download Image
Caption: Sourcewater provides users with a list and interactive map of all available fresh and wastewater, treatment facilities, shippers, and other water-based services. Users can search based on price, location, water quality, and other parameters to reduce the distance, cost, and environmental impact of hauling water.

Caption:
Sourcewater provides users with a list and interactive map of all available fresh and wastewater, treatment facilities, shippers, and other water-based services. Users can search based on price, location, water quality, and other parameters to reduce the distance, cost, and environmental impact of hauling water.
Credits:
Image: Christine Daniloff/MIT

MIT alumnus Josh Adler MBA ’13 is a matchmaker. In the mid-1990s, he launched and sold Amour.com, one of the first online matchmaking websites, which is still operating today.

With oil and gas drilling, water is always on the move — and it’s pricey. Hydraulic fracturing (fracking), for instance, requires millions of gallons of fresh water to be shipped daily to drilling sites, and it produces millions more gallons of wastewater that are sent to treatment facilities or disposal wells. However, this water-management supply chain still relies heavily on word-of-mouth and phone calls to find and conduct business.

“The whole process is managed by one guy calling another guy and asking him to come by and bring his truck to haul off water,” Adler says. “The whole system is stuck in the 1950s.”

Sourcewater, on the other hand, provides users with a list and interactive map of all available fresh and wastewater, treatment facilities, shippers, and other water-based services. Users can search based on price, location, water quality, and other parameters to reduce the distance, cost, and environmental impact of hauling water.

A fracking firm, for instance, may list its wastewater with about 30 characteristics, such as location, quality, volume produced per day, and mineral or chemical properties. Then, they’ll list a price they’ll pay to have it hauled it away. Shippers and treatment facilities can bid on transporting and treating the water. Alternatively, a nearby gas-drilling firm may offer to take away the wastewater for its own operations. From all these offers, the firm can choose the deal that best fits its budget and schedule.

Consider it “an Expedia for water management,” Adler says.

Currently, the website has about 1.4 billion barrels of water listed online, primarily in the Marcellus Shale region of the United States —  including Pennsylvania, Ohio, and West Virginia. Among the dozens of companies and organizations using Sourcewater are Shell, Mountaineer Keystone, Pennsylvania General Energy, and Waste Management, Inc.

Wastewater as a commodity

Apart from making water management more cost effective, Sourcewater aims to promote wastewater as a commodity, championing its use over fresh water in drilling operations and decreasing the amount dumped in disposal wells — “which is the equivalent to a water landfill,” Adler says.

Compared to fresh water, much more nonfresh water is available in the water supply chain, Adler says. The typical oil well, for instance, produces about 10 times as much wastewater as oil per day. That wastewater requires heavy treatment to be used for, say, irrigating edible crops. But it requires very little treatment for reuse in other oil and gas wells.

“There’s a lot you can do with nonfresh water if you can find it and trade it,” he says. “By the time you get your flowback and produced water back, you are probably done with your well completions, but there may be someone nearby that is about to start operations who could use your water.”

This can save operators money and transportation fuel, especially in the Marcellus Shale region, where fracking is prominent, but, in certain areas, disposal wells aren’t. In Pennsylvania, for instance, there are only 12 disposal wells, so some fracking operators must truck wastewater to Ohio, hundreds of miles away, for disposal. If a fracking firm can sell its wastewater to another firm nearby, at a price lower than the cost of freshwater, “Both sides come out well ahead,” Adler says.

Ultimately, a real “conceptual breakthrough” of Sourcewater, Adler adds, is helping redefine water quality, in general, “as a continuum, instead of binary indicator … of fresh water or wastewater.”

Water that’s 10 times the salinity of sea water, for instance, is considered wastewater in industry. But that water can still be used for fracking, which tolerates a wide range of water qualities, and, in fact, doesn’t require fresh water at all. “Using super-saline water for energy needs is a really useful thing,” Adler says. “Even wastewater has value.”

In 2012, Adler came to the MIT Sloan School of Management as a Sloan Fellow, after working at his own real estate company in Washington for a decade. His mission was simple: innovation. “The only innovation in real estate in the past century was the elevator,” he jokes. “I wanted to start something new, something scalable.”

Adler enrolled in Course 15.366 (Energy Ventures), where a lecture delivered by Francis O’Sullivan, the MIT Energy Initiative's director of research, focused on the water used and wasted for fracking. “I was blown away,” Adler says.

Then one day he had a “eureka moment” while talking with a PhD student about software that optimized water shipments coming to and from wells. “I said, ‘But how do they know where to get the water from?’ ‘Is there a marketplace for water?’ The answer was no,” Adler says.

Establishing a marketplace where fresh and wastewater sources could connect made for “an ideal ‘online matchmaking’ operation,” Adler says.

In 2013, Adler developed Sourcewater and, through connections from an MIT Sloan classmate, was able to pilot the software with Shell. Early company meetings were held in the MIT Sloan cafeteria, which is, apparently, quite common. “While there, I’d see at least a dozen of my Sloan classmates doing the same thing for their companies,” Adler says, laughing.

Sourcewater also benefited from MIT mentors, professors, and classmates who offered advice on early-stage startups, as well as from networking opportunities via the MIT Industrial Liaison Program, which connects startups with industry. “There’s something about being in the MIT community that really fosters creativity and innovation,” he says.

Eventually, Sourcewater set up shop in the Cambridge Innovation Center, in Cambridge, Massachusetts. Last month, the startup moved operations to Houston to get closer to the booming oil and gas industry in Texas.

The next step for the startup is to gather public data on water sources to more fully populate its map without relying on customer input. The aim is to be a type of Google search platform for water-based resources. Additionally, Sourcewater is looking into developing an infrastructure for real-time tracking, measuring, and verification of water pickups and delivery using a smartphone app connected to sensors.

“That’s something we’re now looking to build out, because we get asked for it so much,” Adler says. “There’s this huge ecosystem that’s untouched by the Internet or information technology, and there’s great opportunity there.”

A spot market for water