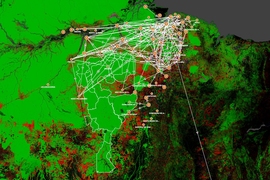 In March 2011, Leonardo Bonanni ’03, SM ’05, PhD ’12 was preparing to defend his PhD thesis on Sourcemap, software that lets consumers map every connection of a product supply chain on a digital map, when tragedy struck in Japan. Although the deadly earthquake and tsunami occurred half a world away, the events had an unexpected impact on Bonanni and Sourcemap.

In the aftermath, automobile, electronic, chemical, and retail sectors worldwide, which relied on Japanese manufacturers for parts and materials, suffered massive shortages. Few affected companies knew enough about the complex Japanese supply chain to respond to such an immense disruption.

Motivated by this incident, Bonanni launched Sourcemap commercially so companies could keep better tabs on their supply chains. Today, dozens of pharmaceutical firms, food producers, and clothing and electronics companies use Sourcemap.

The software, which operates in the cloud, gives companies a visual map of all connected global supplier locations for their products. The software also pulls news feeds on significant political events or environmental disasters to alert companies to potential interruptions.

Sourcemap has also continued its original mission of increasing the transparency of supply chains for consumers. The company offers an open-source platform for anyone to publish supply chain maps. And today Sourcemap announced what Bonanni calls “the most ambitious supply-chain transparency project ever.”

Partnering with Imaflora, a certifier in Brazil, Sourcemap is deploying an online tool, called Origens Brasil, that allows consumers in the country to enter serial numbers of numerous products and see exactly where the products came from. Moreover, Bonanni says, consumers can see if certain products — such as cocoa, palm oil, and paper — come from producers that are contributing to deforestation of the Amazon rainforest.

To do so, the software looks at Global Forest Watch satellite imagery for any noticeable decrease in leaf cover where all ingredients of a product are made. The tool could also be attractive for multinational corporations pledging to support only producers that do not contribute to deforestation, Bonanni says. “This is a totally new level of confidence that you can have when you buy things,” he says.

Supply chains are surprisingly complex systems of organizations, people, and resources that transform raw materials into finished consumer products. Major supply chains, such as those for mobile phones, can sometimes include hundreds or thousands of direct and indirect suppliers of hardware, components, parts, and software.

In fact, Bonanni says, when most companies see their entire supply chains mapped instantly for the first time, they’re quite shocked. “They are struck by the amount of zigzagging that is going on,” he says.

One of the most complex supply chains Bonanni has seen was the first one he tried mapping himself 10 years ago, as part of a research project through the MIT Media Lab and MIT Center for Civic Media: that of the computer chip. One chip, he says, consists of about 50 different materials — including some rare-earth elements — produced from at least that many countries. He never finished the map.

“The computer chip will travel dozens of times around the Earth, if you add up all the paths of all of its subcomponents, before it’s finally created,” he says. “What’s amazing is you have millions of people to make a computer chip, and billions of people now own computer chips. So if you draw the whole supply chain of semiconductors, it’s a social network that includes almost everyone on the planet.”

Traditionally, companies hire consultants to map their supply chains. This is a labor-intensive process, where consultants track down parts and materials, draw out maps with computer tools, and analyze for risks and opportunities. Sourcemap, however, is automated, fast, and visually appealing, Bonanni says.

Using Sourcemap, companies upload product and supplier data, and revenue from each product line. Surveys are sent to suppliers to provide missing information, such as where their raw materials and subcontractors are located. Supply chains appear as color-coded dots (supplier locations) and lines (shipment paths) connecting across a map. For each supplier, Sourcemap reveals the inventory count and calculates the money the company would lose if that location went offline for any reason, accounting for time to find a new supplier and how long inventory will last. Companies can also modify supply chains to plan for new products, customers, or suppliers.

“[Companies] see whether they need to think strategically about shifting the company direction in a big way to avoid running into a wall, whether that means climate change is making the crop that you rely on harder to grow or the demographics of your customer base is shifting,” Bonanni says. “It’s not until you see the entire operations mapped on one screen that you can start to make those decisions.”

According to Bonanni, companies are beginning to share their data to make supply chains — for products such as minerals, apparel, or cocoa — more transparent within industry. Under increased public scrutiny, he adds, companies are becoming more socially conscious of their supply chains, as well.

In 2010, when Sourcemap was still a research project, Stonyfield Farm mapped their entire ingredients supply chain for the public. In 2013, Sourcemap partnered with Mars Chocolate on Vision for Change (V4C), an initiative to improve cocoa productivity and open up direct connections with cocoa farmers to improve their livelihoods. Last year, Fairphone, a company that aims to make environmentally sustainable smartphones, became the first electronics company to publish a Sourcemap of its supply chain, which included more than 300 parts from companies from Japan to North America.

Origens Brasil is another step toward Sourcemap’s mission of greater supply chain transparency, Bonanni says. “The goal for us is to enable that type of visibility, enable companies to see beyond their walls,” he says. “For financial gain, but also for social good, to make sure they’re not using up natural or social resources faster than they can be replenished.”

WCVB-TV spotlights two MIT startups, True Moringa, a beauty and wellness company that uses the oil from Moringa trees grown in Ghana to directly benefit farmers in Ghana, and Sourcemap, which traces supply chains and provides transparency about where goods are stemming from. Says Kwami Williams ’12, co-founder and CEO, of his inspiration for True Moringa: “I started to ask myself, if aerospace engineers can help put a man on the Moon, then what can I do to help put more food on the table for families” in Ghana.

In The World: Mapping the logistics of megacities