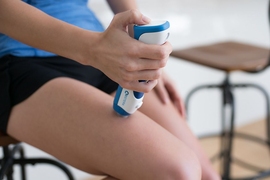 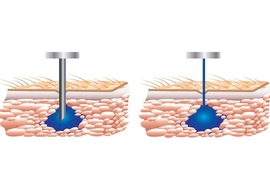 ↓ Download Image
Caption: Based on research by Ian Hunter, the George N. Hatsopoulos Professor in Thermodynamics at MIT, Portal Instruments developed a jet-injection device that delivers a rapid, high-pressure stream of medicine, as thin as a strand of hair, through the skin in adjustable dosages, causing little to no pain.

Caption:
Based on research by Ian Hunter, the George N. Hatsopoulos Professor in Thermodynamics at MIT, Portal Instruments developed a jet-injection device that delivers a rapid, high-pressure stream of medicine, as thin as a strand of hair, through the skin in adjustable dosages, causing little to no pain.

Certain treatments for patients suffering from chronic diseases, such as inflammatory bowel diseases, require multiple intravenous or subcutaneous injections of specific drugs. Because of the pain and anxiety associated with needles, some patients stop adhering to these treatments.

Based on years of MIT research, the startup developed a jet-injection device that delivers a rapid, high-pressure stream of medicine, as thin as a strand of hair, through the skin in adjustable dosages, causing little to no pain. A connected app tracks each dose and the medicine’s effects, and uploads that information to the cloud, for patients and doctors. The device would be sold as a drug-device combination product to medical professionals and provided to patients with a prescription.

The device was developed by Ian Hunter, the George N. Hatsopoulos Professor in Thermodynamics, research scientist Catherine Hogan, and postdocs and students in the MIT BioInstrumentation Laboratory.

Last month, Portal Instruments announced a collaboration with Japanese pharmaceutical giant Takeda to further develop and commercialize the device, called PRIME. The first potential drug candidate is Takeda’s Entyvio, an antibody for adults with ulcerative colitis or Crohn’s disease. Entyvio is currently administered through intravenous infusion and undergoing phase III clinical trials for subcutaneous injections. Portal will receive an initial payment, with potential to earn milestone payments of up to $100 million.

“It’s an exciting opportunity to improve the lives of patients with Crohn’s and ulcerative colitis,” says CEO Patrick Anquetil PhD ’04, who co-founded Portal with Hunter in 2012. The collaboration allows Portal to work alongside Takeda’s research and development team on the product while growing the startup’s business, Anquetil adds.

PRIME accommodates a wide range of biologics — therapeutics made from biological components, such as proteins and living cells — that currently require needle injections. These include hormone treatments, insulin, vaccines, and other therapeutics for various chronic diseases. Because these drugs have a high molecular weight, they require high volumes and have high viscosity, meaning patients must push down with increasing pressure on the syringe for 10 to 20 seconds, which can be painful. According to estimates from the U.S. Food and Drug Administration and the Centers for Disease Control, adherence rates for injected biologics range from around 40 to 70 percent.

PRIME is about the size of an electric razor. Drugs are loaded into a single-use, disposable vessel, which has a tiny nozzle at its tip. Once the vessel is placed into the device, a powerful linear electromagnetic actuator pushes on a piston in the vessel, pressurizing the drug and ejecting a hair-thin jet at high pressure through the nozzle.

Exiting the nozzle at about 200 meters per second, the stream penetrates skin and tissue. “If you do the math, the jet comes out at about Mach 0.7, so almost the cruising speed of an average commercial airliner,” Anquetil says.

Other commercial jet-injection devices exist. But these offer no effective method for controlling the jet, “which causes patient discomfort and suboptimal injections” of certain therapeutics, Anquetil says. Primarily, these spring-loaded devices always eject the same drug dosage, at the same skin depth.

Portal’s device automatically adjusts injection velocity up to 1,000 times in the half-second it takes to deliver a 1-milliliter dose. The key is a closed-loop feedback control system developed at MIT. This system constantly monitors the injection trajectory and provides real-time feedback to the actuator to control the exiting stream. It can thus target a specific skin depth and location for exact drug doses. The first paper co-authored by Hunter detailing the system was published in 2012 in the journal Medical Engineering and Physics.

To further promote adherence, Portal has developed a connected app that automatically tracks each dose taken. Patients can also input how they’re feeling after using the device. If taking a therapeutic for arthritis, for instance, a patient can plot any joints that still hurt on a digital image of a body. This information gets synced with a web dashboard used by doctors to check adherence and patient satisfaction and to adjust treatments.

“Our main driver is to think of patient comfort at the system-level … and fundamentally change how physicians and patients interact,” Anquetil says. “That’s comes from our MIT training.”

Getting ready for prime time

Anquetil joined Hunter’s lab in 1999 and graduated with a PhD from MIT in 2004. For years, he kept in close contact with Hunter, occasionally joining his former professor for lunch. It was during one of these meetings that Hunter brought up a recent, potentially commercial invention from his lab: a needle-free injection platform. Pharmaceutical giant Sanofi had been funding some of the development of the technology.

“Ian told me this technology is ready for prime time,” Anquetil says. “It was great technology that had interest on the industrial side. We knew we could spin a company off around that.”

To help launch Portal, the co-founders met with mentors through some of MIT’s entrepreneurial services, including the Venture Mentoring Service. “That was tremendously helpful” in navigating early-days startup issues, Anquetil says.

At the time, the technology was a broad platform. Studies had shown the platform to be useful for vaccines, diabetes treatments, and delivering therapeutics to bones, eyes, and ears. Seeing a promising beachhead market in biologics for chronic diseases, the researchers built a prototype “that was about the size of a refrigerator,” Anquetil says, laughing.

A host of large instruments controlled the speed and pressure of the injection, which came from a long arm sticking out from the front of the machine. A technician, sitting at a computer behind the massive device, triggered and monitored the injections. It wasn’t exactly consumer friendly, Anquetil says, “but it worked and was developed under design control, so we did our first clinical tests with that machine.”

Over the years, the startup shrunk the device, filed more than 20 patents, and published more results about the device’s efficacy and patient comfort. An article published in AAPS PharmSciTech in May, for instance, showed about 60 percent of 40 subjects in a clinical trial preferred a Portal benchtop prototype to a traditional needle and experienced significantly less pain at injection sites.

With its technology now on track to commercialization for Takeda’s drugs, Anquetil says the startup hopes to partner with more pharmaceutical companies, with aims of replacing traditional auto-injectors, which are EpiPen-like devices used to inject biologics. The idea is to co-package PRIME with the company’s drugs.

“All along we’ve envisioned a device that was a universal injection machine,” Anquetil says. “Now that we’ve shown a viable business model — to partner with pharmaceutical companies to enhance their therapies — we can expect a few more partnerships next year and in the years to come.”

CBS Boston spotlights how Portal Instruments, an MIT startup, is bringing a needle-free injector to the market, which could change the way people take medicine. The device, “fires a pressurized spray to penetrate the skin, instead of piercing the skin with traditional needles.”