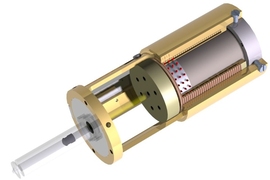 ↓ Download Image
Caption: MIT-engineered device injects drug without needles, delivering a high-velocity jet of liquid that breaches the skin at the speed of sound.
Credits: Image courtesy of the MIT BioInstrumentation Lab

Caption:
MIT-engineered device injects drug without needles, delivering a high-velocity jet of liquid that breaches the skin at the speed of sound.
Credits:
Image courtesy of the MIT BioInstrumentation Lab

Getting a shot at the doctor’s office may become less painful in the not-too-distant future.

MIT researchers have engineered a device that delivers a tiny, high-pressure jet of medicine through the skin without the use of a hypodermic needle. The device can be programmed to deliver a range of doses to various depths — an improvement over similar jet-injection systems that are now commercially available.

The researchers say that among other benefits, the technology may help reduce the potential for needle-stick injuries; the Centers for Disease Control and Prevention estimates that hospital-based health care workers accidentally prick themselves with needles 385,000 times each year. A needleless device may also help improve compliance among patients who might otherwise avoid the discomfort of regularly injecting themselves with drugs such as insulin.

“If you are afraid of needles and have to frequently self-inject, compliance can be an issue,” says Catherine Hogan, a research scientist in MIT’s Department of Mechanical Engineering and a member of the research team. “We think this kind of technology … gets around some of the phobias that people may have about needles.”

The team reports on the development of this technology in the journal Medical Engineering & Physics.

Pushing past the needle

With the delivery of larger protein-based drugs on the rise, researchers have been developing new technologies capable of delivering them — including jet injectors, which produce a high-velocity jet of drugs that penetrate the skin.  While there are several jet-based devices on the market today, Hogan notes that there are drawbacks to these commercially available devices. The mechanisms they use, particularly in spring-loaded designs, are essentially “bang or nothing,” releasing a coil that ejects the same amount of drug to the same depth every time.

Now the MIT team, led by Ian Hunter, the George N. Hatsopoulos Professor of Mechanical Engineering, has engineered a jet-injection system that delivers a range of doses to variable depths in a highly controlled manner. The design is built around a mechanism called a Lorentz-force actuator — a small, powerful magnet surrounded by a coil of wire that’s attached to a piston inside a drug ampoule. When current is applied, it interacts with the magnetic field to produce a force that pushes the piston forward, ejecting the drug at very high pressure and velocity (almost the speed of sound in air) out through the ampoule’s nozzle — an opening as wide as a mosquito’s proboscis.

MIT-engineered device injects drug without needles, delivering a high-velocity jet of liquid that breaches the skin at the speed of sound.
Image courtesy of the MIT BioInstrumentation Lab

The speed of the coil and the velocity imparted to the drug can be controlled by the amount of current applied; the MIT team generated pressure profiles that modulate the current. The resulting waveforms generally consist of two distinct phases: an initial high-pressure phase in which the device ejects drug at a high-enough velocity to “breach” the skin and reach the desired depth, then a lower-pressure phase where drug is delivered in a slower stream that can easily be absorbed by the surrounding tissue.

Through testing, the group found that various skin types may require different waveforms to deliver adequate volumes of drugs to the desired depth.

“If I’m breaching a baby’s skin to deliver vaccine, I won’t need as much pressure as I would need to breach my skin,” Hogan says. “We can tailor the pressure profile to be able to do that, and that’s the beauty of this device.”

Samir Mitragotri, a professor of chemical engineering at the University of California at Santa Barbara, is developing new ways to deliver drugs, including via jet injection. Mitragotri, who was not involved with the research, sees the group’s technology as a promising step beyond jet injection designs currently on the market.

“Commercially available jet injectors … provide limited control, which limits their applications to certain drugs or patient populations,” Mitragotri says. “[This] design provides excellent control over jet parameters, including speed and doses … this will enhance the applicability of needleless drug devices.”

The team is also developing a version of the device for transdermal delivery of drugs ordinarily found in powdered form by programming the device to vibrate, turning powder into a “fluidized” form that can be delivered through the skin much like a liquid. Hunter says that such a powder-delivery vehicle may help solve what’s known as the “cold-chain” problem: Vaccines delivered to developing countries need to be refrigerated if they are in liquid form. Often, coolers break down, spoiling whole batches of vaccines. Instead, Hunter says a vaccine that can be administered in powder form requires no cooling, avoiding the cold-chain problem.