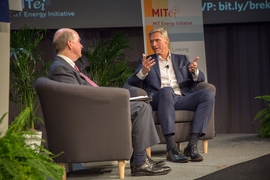 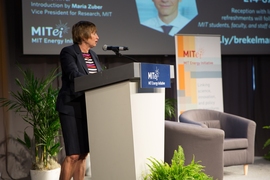 ↓ Download Image
Caption: The discussion, titled, “If you had a billion dollars for energy-related R&D, where would you spend it?,” was introduced by Maria Zuber, MIT’s vice president for research. 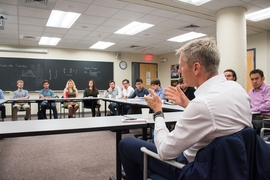 Caption:
The discussion, titled, “If you had a billion dollars for energy-related R&D, where would you spend it?,” was introduced by Maria Zuber, MIT’s vice president for research.

Harry Brekelmans, the projects and technology director for Royal Dutch Shell, one of the world’s leading oil and gas companies and a founding member of the MIT Energy Initiative (MITEI), on Wednesday met with groups of MIT students and faculty members about their work before taking part in a public discussion about energy issues with MITEI co-founder and director Robert Armstrong.

In the discussion, titled, “If you had a billion dollars for energy-related R&D, where would you spend it?,” Brekelmans addressed that lofty question and many others about the company’s, and the world’s, energy future.

“For some years already we’ve been aware of the energy transition,” Brekelmans said. It’s accelerating, he said, and it’s clear that “it’s time to act, even more so than before.” Already, Shell has made “significant investments in wind, in solar, in biofuels — not all of them successful,” demonstrating the need to be careful about how one invests that research money. Because of the complexity of the world’s energy systems and demands, he said, “we have concluded that this will be a multidecade transition.”

Shell has long expressed its acceptance of the science of human-induced climate change and its determination to invest heavily in technologies to help enable a global transition to a world of drastically reduced greenhouse-gas emissions. As part of that commitment, Shell continues to fund a variety of research projects at MIT and elsewhere related to renewable energy, energy storage, and ways of capturing and storing carbon emissions from fossil fuel. 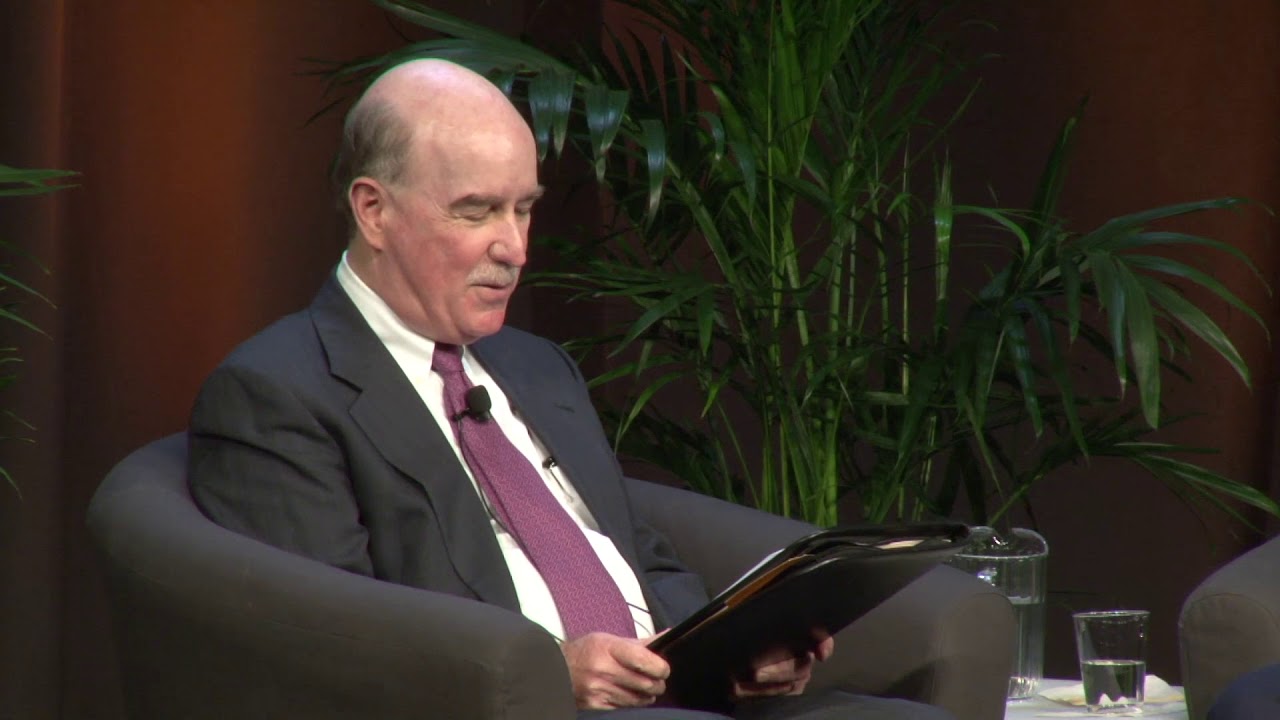 In introducing the discussion Maria Zuber, MIT’s vice president for research, pointed out that Shell’s CEO Ben Van Beurden recently said that with the right mix of policy and innovation, he sees global demand for oil peaking in the early 2030s or sooner — and that his next car will be electric.

Zuber said that MIT’s Plan for Action on Climate Change calls for finding solutions for decarbonizing the world’s energy systems, aiming for a zero-carbon energy system by the century’s end. To achieve that, she said, MIT’s view is that “the best chance of success is if a broad range of stakeholders, from industry to government to civil society, engage with each other proactively to address it.” One way of doing that, she said, is through conversations such as this one.

Brekelmans said that Shell’s approach to energy R&D is two-pronged, working in parallel on both near-term and long-term strategies. For the near term, the emphasis is on finding technologies that already exist in other industries that can be adapted and scaled up to have a rapid impact on energy use. The longer-term work deals with new findings in laboratories, that have great potential but that may require many years of work to determine if they can be scaled up to meet a significant portion of the world’s energy needs or to improve the performance of existing energy systems.

While the company’s investments in low-carbon energy technologies goes back many years, the mix of research projects they support has evolved over time, he said. One change is that much more of the long-term research is now focused on energy storage systems. These are seen as a key enabling technology to allow for increased usage of energy sources that are inherently variable, such as wind and solar power. “It was not part of our portfolio 10 years ago,” he said, but is now a significant piece of it.

Another research area of increasing emphasis is capturing and storing carbon emissions from power plants to reduce their climate impact, he said. But other approaches don’t necessarily have to be high-tech, he said. “When we talk about offsets, we increasingly talk about simple things like reforestation,” he told students during his morning meetings.

Another change, he said, is “in the way we do R&D. Our collaboration with MIT is absolutely fundamental” to Shell’s efforts. “We know we can’t do it ourselves alone. Much of the progress is happening here and at other institutions.” With the company’s own technology campus in Kendall Square, bordering the MIT campus, “we are hiring people who have no prior experience in oil and gas but who have a knack for innovation,” he said. Shell’s investments, he said, include providing “seed investments in crazy ideas, to help bring them to the next stage.”

Despite the company’s ongoing commitment to working toward a transition away from greenhouse emissions, Brekelmans said that he and his colleagues “all conclude every year that we’re not moving fast enough,” and continue to redouble their efforts.

Emphasizing that their reach and their interests are global, he added that Shell has also recently opened a campus in Bangalore, India, that employs almost 1,000 technologists, as an incubator for new technologies and approaches. The world’s energy systems and needs are very different and highly localized, he said: “Almost every country is different,” in terms of its needs and the most effective ways of meeting them.

In the developing world, he said, the company provides aid through the Shell Foundation, helping to bring electricity and other energy supplies to some of the world’s 3 billion people who lack access to reliable power. Among other things, these grants are aimed at helping some developing nations steer toward the use of natural gas rather than coal, as a lower-carbon fuel.

Shell “wants to be a voice and a leader” in the world’s energy transition, he said. But along the way, he said, the company must “not abandon the economic process that made us a leader,” namely the production and distribution of oil and gas.

The company clearly recognizes the need for some kind of pricing on carbon fuels that reflects their real impact on the world, Brekelmans said. Already, the company “internally works with a price on carbon,” assuming that this will eventually be part of the economic reality.

As for what form that pricing should take, whether it’s a carbon tax, a fee-and-dividend, or a cap-and-trade system, he said, “we are relatively agnostic, as long as we have a price that we can then develop and evolve.” Having some such system in place, he says, is “preferable to the almost religious debate over what is the best system.”