Q&A: Running a company in an era of “crazy technological progress” 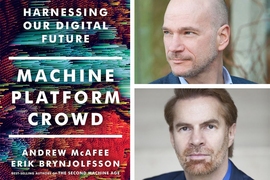 How do ongoing advances in technology affect business management? That’s the question the prolific writing duo of Erik Brynjolfsson and Andrew McAfee pose in their new book, “Machine, Platform, Crowd: Harnessing our Digital Future,” being published on June 27 by W.W. Norton. Brynjolfsson, the Schussel Family Professor of Management Science at the MIT Sloan School of Management and director of the MIT Initiative on the Digital Economy, and McAfee, co-director of the MIT Initiative on the Digital Economy and a principal research scientist at MIT Sloan, also collaborated in 2014 on “The Second Machine Age,” another exploration of the changes digital innovation is bringing to the workplace. McAfee recently talked to MIT News about “Machine, Platform, Crowd.”

Q: What is your new book about?

A: Within the past five years, 10 years easily, at least two really fundamental things have happened. First of all, artifical intelligence started meeting its expectations and even exceeding them. We weren’t expecting that, and it’s pretty remarkable. The machines are much more capable. The second thing is, in the era of the smartphone, we have gone from a globe that was pretty disconnected, to having that same human population for the first time deeply interconnected through powerful devices, which are each about as powerful as all the computers collectively on campus when I was an undergraduate at MIT in the ’80s. Those are both legitimately new things.

Q: I know you’ve mentioned the rise of machines that can win at the game of Go as one instance of these advances. What are some of your favorite examples of machines, platforms, and crowds at work now?

A: Go is my favorite example of the power of machines, because it was so unanticipated that we would have a digital Go champion in 2016 or 2017. The insiders thought if that ever happened it would happen much, much farther out in the future.

In our section on products and platforms, we talk about companies like ClassPass, which is trying to build a purely digital platform; they don’t own any assets, but they’re trying to provide a virtual, very broad gym membership, or exercise membership [by offering rates for an array of memberships]. So they’re putting a platform over the industry of spinning, yoga, pilates, kickboxing, things like that. And if you had asked me just a little while ago for an industry that would not be greatly affected by the digital transformation, I might have said group exercise: You get in the gym with other people and sweat and have a workout. But after working on the book, I think that the exercise industry is going to be changed a lot by platforms.

Finally, we came across a very interesting company called Quantopian that is trying to be essentially a crowdsourced quantitative trading hedge fund. That may sound ludicrous, except, as the founder of the company has said, it is extremely unlikely that all the world’s top algorithmic traders are employed by the [relative] handful of companies that have dominated this industry. So to test that theory, they’ve been holding contests for algorithmic trading. It turns out, lo and behold, most of the people who win those contests are not insiders in the finance industry and have never even worked in finance. It tells me that if you can tap into the crowd and find the right brains, all over the world, and get them involved in what you’re doing, the results are potentially tremendous.

Q: What’s the reaction to these ideas when you give talks about them?

A: The reception to these ideas is all over the map. It goes from outright skepticism to something a little more subtle, which is, “This is great and interesting, but it doesn’t apply to me.” I’ve come across a lot of that.

Q: Do you get pushback about your interpretation of the pace of innovation itself?

A: Yeah, it’s super-interesting. Inside the academic community and among economists there is a huge debate about how much innovation we’re actually seeing. The skeptics say, “Where is the productivity growth, if there’s so much innovation going on?” Or they say, “We had amazing periods of innovation in the past. Are we sure this one measures up?” And those are important debates to have. But in every other community I try to be part of, and that includes investors, policymakers, entrepreneurs, and executives in mainstream incumbent companies, I don’t hear any of that debate, or very little. What I hear instead is: “There’s a lot coming at us, and we need to get on top of it and make it work for us.”

When people say there’s nothing new under the sun, I find that really valuable, because if all you do is talk to technologists, you just get caught up in the hype. It’s almost inevitable. So I really value those discussions. But when I talk to almost anybody else, it’s something close to a foregone conclusion that we’re living in this remarkable era, and I happen to believe that as well. Not only can we sequence the genome, we can edit it with precision. If that’s not a big deal, then I don’t [know what is]. We only mention CRISPR briefly in the book, but the period that we’re in is one to me of monumental progress and innovation.

The Economist reviews Prof. Erik Brynjolfsson and Principal Research Scientist Andrew McAfee’s latest book, which examines how new digital technologies will impact businesses. Brynjolfsson and McAfee, “believe that the latest phase of computers and the internet have created three shifts in how work happens.”

Randall Stross of The Wall Street Journal examines the latest book by Prof. Erik Brynjolfsson and Principal Research Scientist Andrew McAfee, which explores technologies shaping the future of business. Stross writes that the, “authors present a splendid tutorial on things that are too new for most civilians to have gained a good understanding of—cryptocurrencies like Bitcoin, distributed ledgers, and smart contracts.”

In an article for Bloomberg, Peter Coy examines Prof. Erik Brynjolfsson and Principal Research Scientist Andrew McAfee’s latest book, which examines how smart machines might be integrated into the businesses of the future. Coy explains that the book is written for, “executives and entrepreneurs trying to make their way in this brave new world of driverless cars and hackathons.”

Prof. Erik Brynjolfsson and Principal Research Scientist Andrew McAfee speak with Tom Ashbrook of On Point about their new book, “Machine, Platform, Crowd.” Speaking about how much decision-making machines could be handling in the future, Brynjolfsson explains that “instead of having us humans try to tell the machines exactly what needs to be done, machines are learning on their own.”

Q&A: On the future of human-centered robotics