When Alphabet executive chairman Eric Schmidt started programming in 1969 at the age of 14, there was no explicit title for what he was doing. “I was just a nerd,” he says.

But now computer science has fundamentally transformed fields like transportation, health care and education, and also provoked many new questions. What will artificial intelligence (AI) be like in 10 years? How will it impact tomorrow’s jobs? What’s next for autonomous cars?

These topics were all on the table on May 3, when the Computer Science and Artificial Intelligence Laboratory (CSAIL) hosted Schmidt for a conversation with CSAIL Director Daniela Rus at the Kirsch Auditorium in the Stata Center. 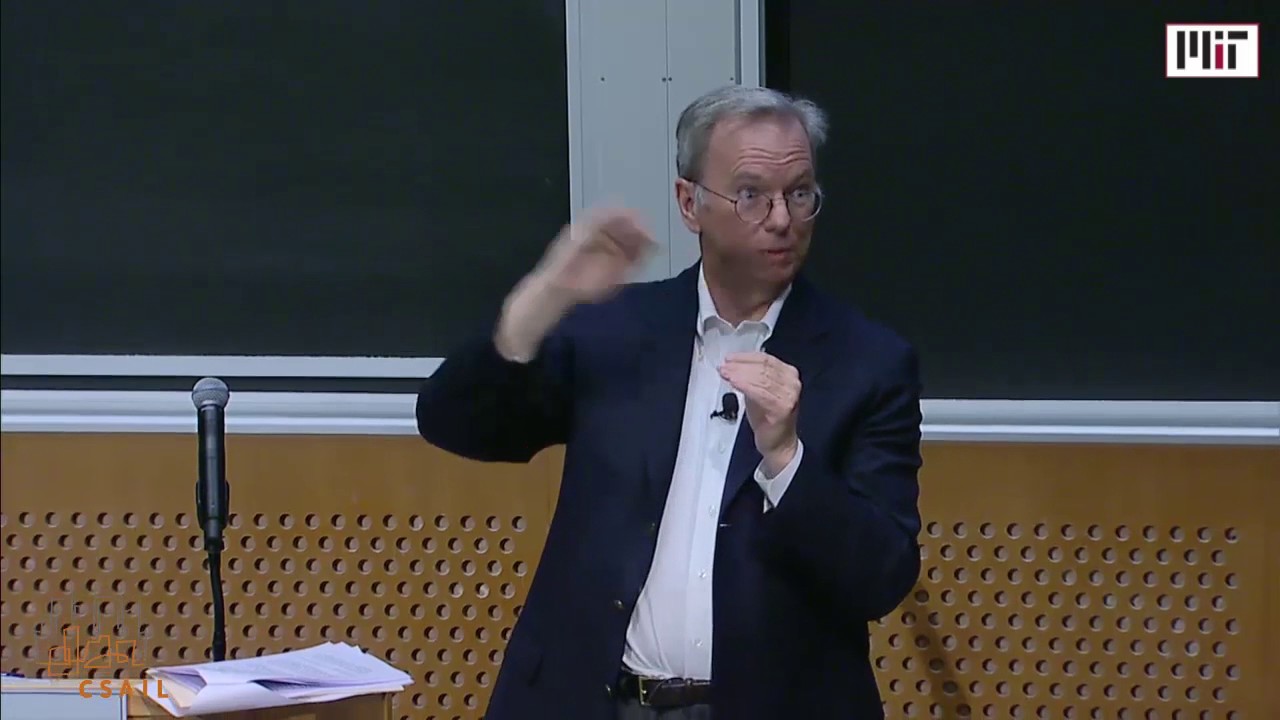 Schmidt discussed his early days as a computer science PhD at the University of California at Berkeley, where he looked up to MIT researchers like Michael Dertouzos. At Bell Labs he coded UNIX’s lexical-analysis program Lex before moving on to executive roles at Sun Microsystems, Novell, and finally Google, where he served as CEO from 2001 to 2011. In his current role as executive chairman of Google’s parent company, Schmidt focuses on Alphabet’s external matters, advising Google CEO Sundar Pichai and other senior leadership on business and policy.

Speaking with Rus on the topic of health care, Schmidt said that doing a better job of leveraging data will enable doctors to improve how they make decisions.

“Hospitals have enormous amounts of data, which is inaccessible to anyone except for themselves,” he said. “These [machine learning] techniques allow you to take all of that information, sum it all together, and actually produce outcomes.”

Schmidt also cited Google’s ongoing work in self-driving vehicles, including last week’s launch of 500 cars in Arizona, and addressed the issue of how technology will impact jobs in different fields.

Rus also asked Schmidt about his opposition to the Trump administration’s efforts to limit the number of H1B visas that U.S. tech companies can offer to high-skilled foreign workers.

“At Google we want the best people in the world, regardless of sex, race, country, or what-have-you,” said Schmidt. “Stupid government policies that restrict us from giving us a fair chance of getting those people are antithetical to our mission [and] the things we serve.”

Schmidt ended the conversation by imploring students to take the skills they’ve learned and use them to work on the world’s toughest problems.

“There’s nothing more exciting than that feeling of inventing something new,” he said. “You as scientists should identify those areas and run at them as hard as you can.”

In his introduction of Schmidt, MIT President L. Rafael Reif applauded him for his leadership on issues like innovation and sustainability, including his support of MIT’s Inclusive Innovation Competition, which awards prizes to organizations that focus on improving economic opportunity for low-income communities.

“Eric embodies what we at MIT call ‘making a better world,’” said Reif. “As AI and machine learning become more sophisticated and increase the potential for automation, the concept of ‘inclusive innovation’ has never been more critical. I am grateful to Eric for his support of the competition and for his partnership on an issue that matters deeply to us at MIT.”

The talk was co-sponsored by CSAIL and the Department of Electrical Engineering and Computer Science.

Dropbox founder drops by to inspire and spark collaboration