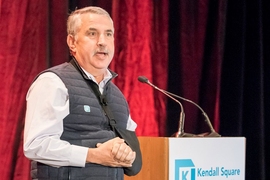 The KSA is a nonprofit organization of 160 industry and academic partners in and around Kendall Square — including Google, Microsoft, the Cambridge Innovation Center, and MIT — that promotes the vibrancy of the district. Each year, the KSA holds a meeting to elect new board members, provide updates on projects, and host guest speakers who share insights on technology, business, education, and other fields.

But Simmons said she feels “heartened” at the growing innovation and diversity in Kendall Square, and at KSA’s ability to bring local members of government, academia, and businesses together to foster a vibrant ecosystem in Kendall Square. “Together, we will weather this storm,” Simmons said.

KSA President Sarah Gallop, co-director of the MIT Office of Government and Community Relations, updated the community on popular KSA projects, including information kiosks and “little free libraries” — trading posts where people can exchange books. She said the KSA is this year focusing on several strategic priorities in Kendall Square: advancing innovation, advocating for better transportation, enhancing the district’s public environment, and growing collaborations. “Kendall Square has many of those foundations, but there’s a lot of work to be done,” Gallop said.

In his talk, Friedman, author of the international bestseller “The World is Flat” and a foreign affairs columnist for The New York Times, discussed how the rise of digital globalization — which refers to worldwide flows of data and information, instead of goods — and rapidly accelerating technologies have impacted society. Many key points came from his new book, “Thank you for Being Late: An Optimist’s Guide to Thriving in the Age of Accelerations.”

Friedman said today’s digital globalization hinges on the year 2007, when Facebook and Twitter went global, the internet hit 1 billion users, and more people sent texts than made phone calls. That year also saw the launch of the iPhone, the Amazon Kindle, Airbnb, GitHub, the Android operating system, and Hadoop, the first platform to enable big-data processing. Among the most important innovations, he said, was cloud computing, which gives incredible power to businesses and individuals.

“What happened in 2007 was the release of energy into the hands of people and machines, the likes of which we have never seen before,” Friedman said. The year “may be understood in time as the single greatest technological inflection point since Gutenberg invented the printing press.”

Nearly overnight, he said, these technologies changed several aspects of society — including the workplace, ethics, communities, and global politics — and the power of the individual. “What one person can do now as a maker or breaker is unlike anything we’ve seen,” he said. “We have a president who can now tweet in his pajamas directly to hundreds of millions of people around the world. But what’s really amazing is that the head of ISIS can do the exact same thing.”

For workplaces, Friedman said the pace of technological change is now “simply outstripping the ability of our institutions and communities and many individuals to adapt.” A solution, Friedman said, lies in “learning faster and governing smarter.” As examples, Friedman noted companies giving assistive technologies to workers, launching education websites, and developing algorithms that can aid in job placement.

Such concepts are also driven by the innovative companies and organizations in Kendall Square, Friedman said. “That’s what Kendall Square is all about,” he said. “How do you get people to learn faster and govern smarter … so more people can take advantage of where we are today in terms of technology?”

As for ethics and community, Friedman said following the “Golden Rule” — “Do unto others as you would have them do unto you” — is more applicable than ever in a world where one person can do large-scale damage via Twitter, hacking, or other means. “We’re in a realm where we’re all connected and no one is in charge,” Friedman said.

In a closing sentiment, Friedman said that to flourish in an age of rapid technological acceleration, innovation hubs such as Kendall Square must adopt the characteristics that helped “Mother Nature” survive for billions of years — be resilient, adaptable, stable, and diverse. “The communities, the Kendall Squares, that most closely [embrace] Mother Nature’s strategies ... are the ones that will thrive in the age of acceleration.”

MIT President L. Rafael Reif was also on hand to offer welcoming remarks, calling the present day an “exciting time in Kendall Square, with unprecedented opportunities before us.” His talk focused on KSA and MIT’s roles in helping shape the district.

In 1980, when Reif first came to study at MIT, Kendall Square was an industrial wasteland, he said. With the help of KSA, “that little rough patch has grown into a global hub for biotech, research, and innovation.” Today, Kendall Square — which Reif called “the most innovative square mile in the world” — is home to hundreds of startups and the research arms of many leading pharmaceutical companies.

Reif said MIT is taking steps to make Kendall Square “an even more dynamic and inspiring place to eat, work, and play … further demonstrating its deep commitment to this one-of-a-kind ecosystem.”

Reif noted MIT’s recent investment in redeveloping the John A. Volpe National Transportation Systems Center, with aims of turning the federally owned 14-acre parcel in Kendall Square into a more vibrant, mixed-use site that will benefit the Institute’s mission and the Cambridge community.

The redevelopment represents an enormous responsibility, Reif told the crowd of representatives from the KSA and roughly 100 companies and organizations in Kendall Square and beyond. “In the months and years ahead,” he said, “we look forward to working with all of you, and with the community more broadly, to shape the future of the Volpe site, a future that we believe is extremely bright.”