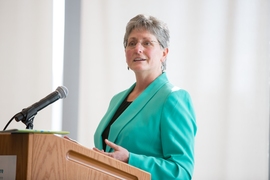 ↓ Download Image
Caption: Sarah Gallop, co-director of the MIT Office of Government and Community Relations, was voted as new president of the Kendall Square Association. “We’re all engaged in something quite thrilling here, and I look forward to seeing what will be unfolding in the years to come,” Gallop said.
Credits: Photo: Bryce Vickmark 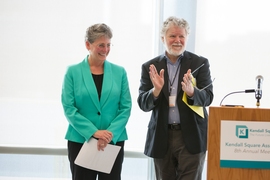 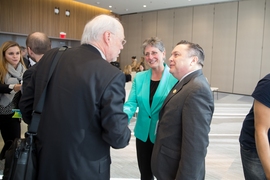 Caption:
Sarah Gallop, co-director of the MIT Office of Government and Community Relations, was voted as new president of the Kendall Square Association. “We’re all engaged in something quite thrilling here, and I look forward to seeing what will be unfolding in the years to come,” Gallop said.
Credits:
Photo: Bryce Vickmark

The eighth annual Kendall Square Association (KSA) meeting took a reflective tone this year, showcasing how academic and industry collaborations have transformed MIT’s abutting district, Kendall Square, from an industrial wasteland into an innovation hub — and how future collaborations will further shape the district.

In welcoming more than 200 meeting attendees — representatives from roughly 100 companies and organizations in Kendall Square and beyond — to MIT’s new Samberg Conference Center, former KSA President Alan Fein likened today’s digital revolution to the industrial revolution. “That [industrial] revolution was based on the steam engine and increasing use of machine tools,” Fein said. “This one is based on the vast power of computing and communications capabilities.”

In Kendall Square, Fein added, the computational revolution has brought together researchers with different backgrounds and areas of expertise, such as biology and engineering, to innovate in shared labs and offices, and at universities. “Here in Kendall Square, we have the opportunity and responsibility to help lead this revolution,” he said.

The KSA is a nonprofit organization of industry and academic partners in and around Kendall Square — including Google, Microsoft, the Cambridge Innovation Center, and MIT, to name a few — that aims to promote the vibrancy of the district. Each year, the KSA holds a meeting to elect new board members and update the community on their projects.

Fein stepped down as KSA president this year. At the meeting, sponsored by MIT and Biogen Idec, Sarah Gallop, co-director of the MIT Office of Government and Community Relations, was voted in as the new KSA president and discussed some initiatives she’ll help bring to fruition. Upcoming projects include information kiosks, which will be out by summer, and KSA’s version of “little free libraries” — trading posts where people can exchange books.

Meanwhile, the KSA continues to “address issues like transportation or the work [of] trying to advance the revolution Alan [Fein] was talking about,” Gallop said. “We’re all engaged in something quite thrilling here, and I look forward to seeing what will be unfolding in the years to come.”

In his keynote address, biotech pioneer and Institute Professor Phillip Sharp, co-founder of Alnylam and biotech giant Biogen Idec, said Kendall Square has “grown out of a collaboration between community, university, and the financial community to make a tremendous innovation sector. What we do here is going to have consequences 20, 30, 40 years from now.”

Sharp kicked off his talk with footage of the debate in the mid-1970s between the Cambridge City Council and scientists at MIT and Harvard University, pertaining to the risks and benefits of recombinant DNA — the then-controversial technology of combining multiple DNA strands to create new DNA sequences.

In 1977, Cambridge became the first city in the world to regulate the manipulation of genetic material, with its Cambridge Recombinant DNA Technology Ordinance. These regulations paved the way for biotech companies to set up shop in Kendall Square, including Sharp’s Biogen Idec in 1978. “That allowed biotech companies to take real estate here and commit 10, 20 years of investment and be part of the Cambridge community, because they were certain they had guidelines to live by,” Sharp said.

Three decades later, more than 20 large biotech and life-sciences companies, labs, and organizations — including the Broad Institute of MIT and Harvard, the Johnson and Johnson Innovation Center, Pfizer, and the Novartis Institutes for BioMedical Research — operate alongside dozens of smaller companies in the industry.

Over the years, Sharp said researchers in Kendall Square and across Cambridge have discovered how to sequence the human genome and silence genes using RNA, among other innovations. Sharp’s company Alnylam is developing therapies that use RNA to silence genes and create new therapies for diseases. “This is very likely to rapidly change how we do medicine,” he said. “It’s a whole new class of drugs.”

The future of biotech in Kendall Square, Sharp said, will include more integration of life sciences with engineering — a concept represented by MIT’s Koch Institute for Integrative Cancer Research, where biologists and engineers work together to study and develop treatments for cancer. Strikingly, he added, a third of all MIT engineering faculty, students, and researchers are now involved in life sciences, compared with a small percentage of combined science and engineering researchers 20 years ago, some time before Kendall Square’s boom. “This [collaboration] is going to shape the future in which this technology evolves and how it’s translated into society,” he said.

A next step for Kendall Square is integrating life-sciences advances with information technology — perhaps in collaborations with the likes of Google, Microsoft, and IBM, which recently opened a health-data office in Kendall Square — to improve health care, Sharp said.

For example, he said, many people could soon have their individual DNA sequenced — a concept called personal genomics. Such genetic information could be combined with medical-record data to better diagnose diseases and help predict how patients may respond to drugs or how their diseases may progress. It could also help identify the impact of certain conditions cause by genetic abnormalities and stop the disease cycle. “This is where technology is headed,” Sharp said.

The other guest speaker was Carrie Fitzsimmons, director of Le Laboratoire in Cambridge and executive director of ArtScience Labs, who discussed the intersection of art and technology in Kendall Square.

Welcoming remarks came from MIT’s Executive Vice President and Treasurer Israel Ruiz, who discussed MIT’s Kendall Square Initiative to build housing, retail outlets, labs, and innovation spaces in the district. Many of those projects are underway, Ruiz said, thanks to help and support from the KSA. “The Kendall ecosystem is as strong as it’s ever been, and we want it to be stronger, and you are really the crew that makes it all happen,” he told KSA members.

Kendall Square: A global center for innovation grows alongside MIT