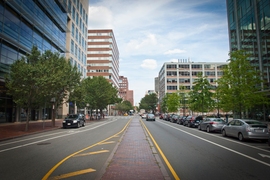 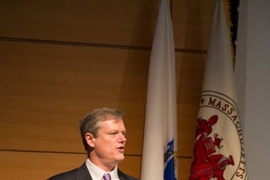 Among other things, Baker emphasized the creation of a task force to solve issues affecting the Massachusetts Bay Transportation Authority (MBTA), and recommended increased collaboration between the state, MIT, and Kendall Square’s many businesses and organizations.

“We will work very hard to make sure that your growing pains [in Kendall Square] are all positive,” Baker told the crowd of more than 225 at MIT’s Tang Center.

The KSA is a nonprofit organization that aims to promote the health, vitality, and vibrancy of Kendall Square. Attendees of this year’s meeting, hosted by MIT, included representatives from around 150 companies and organizations in Kendall Square and beyond.

In his talk, Baker, who took office in January, discussed the MBTA’s service issues this winter, when record snowfall forced trains and buses to run at limited capacity.

“We are more than well aware of the fact that we have some big-time transportation and mobility issues that we need to deal with here … in an active and aggressive way to move things forward,” he said.

Baker said recent talks with Massachusetts Secretary of Transportation Stephanie Pollack helped accelerate the formation of the Kendall Square Mobility Task Force — in coordination with the KSA and the City of Cambridge — to address transit issues in Kendall Square.

The task force, which includes representatives from government and the private sector, is currently focusing on several key areas, Baker said. They include increasing the capacity of Red Line subway cars; revamping the subway’s signaling technology; purchasing new Red Line cars; and planning for the future of the Grand Junction Railroad, which runs through Kendall Square and is used for freight purposes. By early April, Baker said, a draft report from the task force could be available for the public.

Budgetary issues are a challenge with the MBTA, Baker said. A solution, he added, may come from observing other U.S. cities or other countries that have improved their transit systems without spending too much money.

“One of the questions we’re going to face as the commonwealth on this stuff is how reform-oriented we’re willing to be,” he said. “I want to make sure we’re pretty open-minded about which modalities can ultimately give us the most flexibility and the biggest bang to serve the needs and requirements of the population going forward.”

In discussing collaboration between the commonwealth and Kendall Square, Baker expressed the need for government to think “horizontally” — opening communication channels with MIT, Harvard University, and other enterprises and organizations in the area.

“One of the things you’re going to hear coming from our administration is an aggressive attempt to make the commonwealth think horizontally, and not just vertically, when it thinks about how it can be a helpful partner with … ecosystems like this going forward,” he said.

As an example, Baker pointed to Lab Central, a 28,000-square-foot facility opened in Kendall Square in December 2013, and owned by MIT, that leases laboratory and office space to some 25 biotech companies. Former Gov. Deval Patrick had been an early proponent of Lab Central, and Baker said he’d like to initiate similar collaborations around the state.

“That’s the sort of thing, and I think the kind of role, where I think state government … can make a really big difference,” he said.

Prompted by an audience member to flesh out plans to improve Kendall Square’s global reach, Baker said that, too, would involve greater collaboration. MIT and Harvard, he said, “have been global institutions for a very long time.” Moving forward, he said, the commonwealth could work closely with MIT in such efforts.

Additionally, he expressed a need to better connect with the global businesses — such as Google — that are sprouting up in Kendall Square, so as to promote a larger footprint. “There are some really big shadows that now come down into this area that have never been here before, and we should figure out a way to take advantage of that,” he said.

The meeting’s other speakers — and Baker — talked about how far Kendall Square has come in the past few decades. Indeed, for years the neighborhood consisted largely of industrial factories, open space, and parking lots.

In the 1980s and ’90s, Kendall Square saw an influx of high-tech and biotech multinationals, followed by hundreds of startups. In the past six years, according to the KSA, the neighborhood has seen roughly 5 million square feet of development.

In 2014, Pfizer opened a 280,000-square-foot research and development facility in Kendall Square, leased from MIT, which is focusing on developing drugs for rare diseases, inflammation, neuroscience, and cardiovascular diseases.

In his talk, Gutierrez-Ramos, who heads up the center, discussed Pfizer’s latest projects, including the development of better methods of testing clinical hypotheses. Currently it can take a decade or more to get from a fundamental lab finding to human trials. “In the long chain of translation, we have a weak point as a [biotech] community,” he said.

By collaborating with colleagues in Kendall Square, Gutierrez-Ramos added, Pfizer has been “able to make big waves” in its drug pipeline.

In his opening remarks, Schmidt alluded to MIT’s strong connections to Kendall Square, which he said have led to a growing population of students and professors setting up businesses and laboratories in the innovation district.

“Kendall Square provides us with a unique laboratory to advance new models of collaboration,” Schmidt said. “The world is watching what we do here to learn about how to drive innovation forward.”

Inside an innovation ecosystem