New chapter for theater at MIT opens with “Everybody,” a morality play for our time 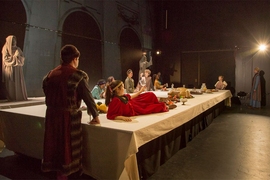 ↓ Download Image
Caption: For the MIT production of the 2017 play “Everybody,” the medieval banquet scene from Hugo von Hofmannsthal’s 1911 play “Jedermann” was performed as a prelude — to show the historical roots of the themes in “Everybody.” Both plays are based on the 15th century English morality play “Everyman."
Credits: Photo: Jonathan Sachs, MIT SHASS Communications 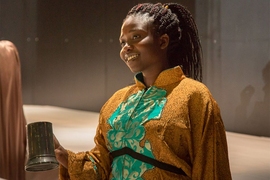 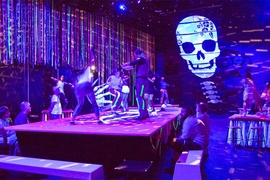 ↓ Download Image
Caption: For the "danse macabre" scene in “Everybody,” Sara Brown, MTA director of design, collaborated with senior Brandon Sanchez, who served as the associate designer and created the larger-than-life skeleton for the set.
Credits: Photo: Jonathan Sachs, MIT SHASS Communications 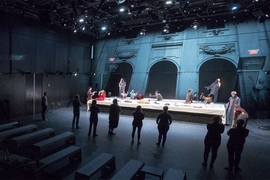 ↓ Download Image
Caption: The medieval banquet scene includes a floor-to-ceiling projection of Salzburg Cathedral, which was the site of the original performance of the 1911 play “Jedermann.”
Credits: Photo: Jonathan Sachs, MIT SHASS Communications 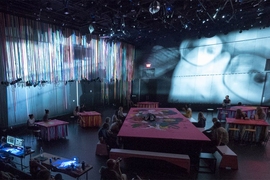 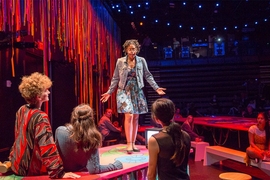 ↓ Download Image
Caption: Everybody, played by junior Hunter Richardson, is unconsoled by Kinship and Cousinship when she asks them to accompany her to the grave.
Credits: Photo: Jonathan Sachs, MIT SHASS Communications

Caption:
For the MIT production of the 2017 play “Everybody,” the medieval banquet scene from Hugo von Hofmannsthal’s 1911 play “Jedermann” was performed as a prelude — to show the historical roots of the themes in “Everybody.” Both plays are based on the 15th century English morality play “Everyman."
Credits:
Photo: Jonathan Sachs, MIT SHASS Communications

Caption:
For the "danse macabre" scene in “Everybody,” Sara Brown, MTA director of design, collaborated with senior Brandon Sanchez, who served as the associate designer and created the larger-than-life skeleton for the set.
Credits:
Photo: Jonathan Sachs, MIT SHASS Communications

Caption:
The medieval banquet scene includes a floor-to-ceiling projection of Salzburg Cathedral, which was the site of the original performance of the 1911 play “Jedermann.”
Credits:
Photo: Jonathan Sachs, MIT SHASS Communications

Caption:
Everybody, played by junior Hunter Richardson, is unconsoled by Kinship and Cousinship when she asks them to accompany her to the grave.
Credits:
Photo: Jonathan Sachs, MIT SHASS Communications

“Everybody,” the inaugural performance in MIT’s new theater building, is a 2017 play based on “Everyman,” the venerable 15th century English morality play. As performed last week at MIT, “Everybody” at once updates a masterwork from the distant past, and represents the future — the great range of new arts opportunities that the new Building W97 is making possible at MIT.

Speaking at a preview performance of “Everybody,” Institute Professor Marcus Thompson said, “It’s hard to describe the thrill of the MIT performing arts now having our own ‘lab’ where we can experiment, rehearse, collaborate, create — and share our work with the MIT community and the wider culture.”

The first MIT theater production to be designed, rehearsed, built, and staged in W97’s purpose-built space enabled MIT students to be far more immersed in creating and making. From building sets, to problem-solving light and sound installations, to gaining experience in stagecraft and narrative, the students’ activities epitomize the Institute’s maker culture.

”Everybody” showcases not only the production values the new space affords, but also reflects the Institute’s priority to engage students in developing new and deepened perspectives on the world. “The MIT mission is to serve humanity,” said Thompson, “and the arts are a powerful way for our students to grow in knowledge and understanding of the human condition.”

Standing in the new blackbox theater, illuminated by a spotlight, President L. Rafael Reif said: “The arts are critical to the MIT experience.They give our students tools they need to succeed — not simply as scientists, engineers, and scholars, but as informed contributors to society — as citizens.”

A home for innovation and experimentation

In fulfilling this aspect of their mission, the MIT Theater Arts faculty plan to bring more diverse voices and new plays like “Everybody” to campus, another ambition the ingeniously designed W97 facility makes possible. “There is a great focus at MIT on innovation and experimentation in all the technical and scientific areas, and our students also want and need to know about the comparable range of exciting innovation, research, and experimentation in the arts,” says Anna Kohler, the noted artist and senior lecturer in MIT Theater Arts who directed “Everybody.”

The demand is great. Student enrollment in theater arts has doubled since 2012, and Course 21M (Music and Theater Arts, or MTA) currently has the fifth largest enrollment of any course at MIT. In 2015, MIT added a BS in theater to give the most engaged students a broad foundation in theoretical and practical studies as well as intensive practice in performance and design.

Kohler adds that as MIT Theater Arts is “transforming more and more into a research program, it is more valuable than ever to bring the voices of experimental playwrights and theater-makers to the MIT student body.”

“Everybody” more than fits this criteria because playwright Branden Jacobs-Jenkins reimagines the original text to give ample space for social critique and technical experimentation. One of the actors, Natalia Guerrero ’14, who majored in physics with a writing minor, says the production showed her that a play is “so much bigger than the text. There’s movement, action, light, sound, music, video — all these tools breathe life into the pages of dialogue, making them into something real and vital.”

A feast and a journey

The show opens with a medieval banquet on the steps of Salzburg Cathedral, where Hugo von Hoffmannsthal’s 1911 play “Jedermann” is being performed. Kohler included this prelude for historical context. “Jedermann,” like “Everybody,” follows the same basic plot as its source, “Everyman.” The protagonist, Everyman, is on top, until he isn’t. He learns that he is dying and must account for his choices. He journeys toward life’s end unconsoled by friends, family, or material wealth. Only one companion, Good Deeds (or, in the Jacobs-Jenkins version, Love), accompanies him to the grave.

When the opening “Jedermann” scene ends, the set is reconfigured. The massive banquet table becomes the stage for “Everybody.” Both actors and audience sit around it — a reminder that everyone partakes equally of this feast. The theater becomes a techno-fiesta adorned with brightly colored Dia de los Muertos decor, mariachi music, and dancing skeletons, all of which lend levity to the sober subject.

On this multimedia production, Kohler, an early member of the Wooster Group, a theater company highly regarded for combining live audio and video in surprising ways, collaborated with Joshua Higgason, a technical instructor, and Sara Brown, director of design for MTA. The associate designer, Brandon Sanchez, a senior in electrical engineering and computer science, created several key elements for the set, and students in MTA’s stagecraft class are running the show each night.

With its allegorical characters, video interludes, and nontraditional staging, “Everybody” affords the 13 student actors in the ensemble ample opportunities to deepen and expand their performance skills. For many of the students, the show is also their first immersion in all the facets of a full-scale production, from acting, voice, and movement work, to lights, sets, costumes, and props.

“I don’t love how my body keeps changing,” Everybody laments as she plods to the grave. It’s a moment of awareness anyone might have. We can see ourselves in “Everybody,” which led Kohler to select it for the students. “It’s a profoundly human show … about humans being human together. Given the level of isolation we all experience, particularly around fearful events in life, the need for connecting is very important,” she says.

Grace Kuffner, a sophomore double majoring in biology and theater arts, is one of multiple actors who portray Everybody. (The cast draws straws during each performance to determine who will play the lead.) Kuffner observes that while most roles allow an actor to embody “someone entirely different,” Everybody presents a special challenge, because “my character isn't different from me at all. Just like Everybody, I am going to die, and I worry about how, when, why, and with whom. Everybody talks like me, thinks like me, and has some of my own flaws.”

Herng Yi Cheng, a senior majoring in mathematics with a concentration in theater arts, says, “In my role as Love, my relationship with Everybody changes depending on who plays that role each night, because different people bring different emotions and acting styles to the character.” For this show, Cheng says he worked “to say every line as if for the first time,” without relying on the “‘muscle memory’ of well-practiced intonation and gestures.”

Such skills will serve these actors beyond this production, and beyond the theater. Natalia Guerrero ’14, a research associate at the MIT Kavli Institute for Astrophysics and Space Research, says that for her and her castmates, reconciling creative aspirations with the drive to excel in a STEM field is a question of identity: “We’re all searching for a way to do what seems impossible, to develop fully all the aspects of our creative and our intellectual identity. It’s really affirming, therefore, that in rehearsal, Anna is clear that she’s working with us as actors, as people who have this creative work as part of our identity.”

In Kohler’s view, producing plays like “Everybody” at MIT benefits not only those students involved in theater arts, but also the whole student body, who just might need to experience a morality play that addresses some of their anxieties. One student in the audience said it best after the opening performance: “I’m a lot less worried about my p-sets now. This play kind of puts everything in perspective.”

MIT Theater Arts: The next act

The world as we think the world should be