MIT Theater Arts: The next act 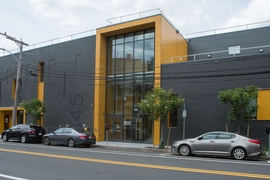 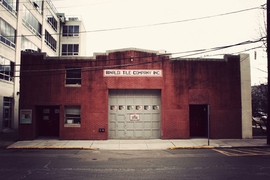 ↓ Download Image
Caption: A view of the old MIT Theater building. MIT students value theater for many reasons, not least for its incomparable lens on the human world, and for theater’s time-honored ability to help students discover their own voices and views, and how to express them. 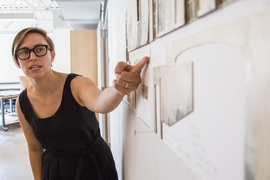 ↓ Download Image
Caption: Sara Brown, director of design for MIT Theater Arts, helped plan the new building. “We were inspired by spaces that prioritize and expose the activities of making theater over spaces that camouflage, decorate, or hide those works,” she says.

Caption:
The building arrives at a time when the MIT Theater Arts program is experiencing exponential growth in stature, scope, and student engagement. Student enrollment has doubled since 2012, with more than 800 undergrads now taking theater classes each academic year.

Caption:
A view of the old MIT Theater building. MIT students value theater for many reasons, not least for its incomparable lens on the human world, and for theater’s time-honored ability to help students discover their own voices and views, and how to express them.

Caption:
Sara Brown, director of design for MIT Theater Arts, helped plan the new building. “We were inspired by spaces that prioritize and expose the activities of making theater over spaces that camouflage, decorate, or hide those works,” she says.
Credits:
Photo: Jonathan Sachs

In 1597, when the Lord Chamberlain’s Men’s lease expired on their theater building in Shoreditch, then still a suburb outside the City of London, the company dismantled the structure, timber by timber, and moved it across the Thames to Bankside — where they rebuilt it into London’s renowned Globe Theatre.

While theater practitioners rarely have to take building construction into their own hands quite so literally, there are advantages when they have an active role in creating their performance spaces.

The recently completed MIT theater and performing arts building (W97), which enters into full operation this fall, benefited greatly from a close creative relationship between the architects (designLAB), the MIT Facilities team, and the MIT Theater Arts faculty, notably Norton Award-winning director of design Sara Brown, and Obie-winning director Jay Scheib, a professor of theater known for his genre-defying productions.

A free, vast, and variable space

Of transforming an aging warehouse at 345 Vassar Street into an ingenious 25,000-square-foot performing arts building, Brown says, “We were inspired by spaces that prioritize and expose the activities of making theater over spaces that camouflage, decorate, or hide those works.”

Scheib adds, “The form of our new building has entirely followed its function.” For example, the team designed the main theater as an unadorned, tech-friendly black box that can accommodate diverse productions and styles of stagecraft, an approach that recalls architect and theatre designer Adolphe Appia’s vision for “a free, vast, and variable space.”

Commenting on the building, MIT President L. Rafael Reif says, “Like the main group buildings at the heart of campus, W97 embodies and encourages MIT’s signature openness, flexibility, and boldness. With a focus on making and creating, on fearless exploration and hands-on problem solving, the students and faculty of MIT's Theater Arts community pursue their aspirations with mind, hand, heart, body, and soul. I am delighted that at last they have a space that lives up to the quality of their creativity.”

The urgent need for a new, purpose-built theater space became clear when MIT Theater’s home in the 19th century Rinaldi tile factory had to be demolished as the Kendall Square redevelopment began in 2016. “Rinaldi had become a space that we could use to prototype new works and push forward the development of MIT’s theater program,” Scheib says. Other functions of the theater program were scattered around campus — in Kresge Auditorium, the Walker Memorial, and Buildings 4 and 10.

W97 both replaces the Rinaldi facilities and consolidates all the other theater activities under one roof. Like earlier arts buildings on campus, including the Wiesner Building, Kresge, and the Media Lab, W97 signifies the Institute’s strong commitment to the arts as an integral mode of exploration and discovery.

The building also arrives at a time when MIT Theater Arts is experiencing exponential growth in stature, scope, and student engagement. Student enrollment has doubled since 2012, with more than 800 undergrads now taking theater classes each academic year. An SB in theater was added in 2015 to give the most engaged students a broad foundation in theoretical and practical studies as well as intensive practice in performance and design. “The program has grown into a magnet for talent and innovation, whose reputation extends far beyond the campus,” Scheib says.

MIT students value theater for many reasons, not least for its incomparable lens on the human world, and for its time-honored ability to help students discover their own voices and views, and how to express them well. MIT Theater is also renowned for experiences that develop skills in creative collaboration and risk-taking that are valuable in any field.

This current flourishing rests on a solid legacy that began with student-driven performances in the early days of the Institute and continued to expand throughout the 20th century. By the 1990s, word of MIT’s enterprising theatrical work had made its way to the Royal Shakespeare Company, whose leadership saw MIT Theater as a lab for formulating plays dealing with science and cultural transformation.

Similarly, MIT’s theater faculty — all practicing artists in demand around the globe — engage their students in the process of developing new works to be performed on the world’s leading stages. Of the program’s burgeoning range and popularity, senior lecturer Anna Kohler says: “It’s very exciting — and it’s a huge responsibility. We really needed this building to lift MIT Theater into the 21st century.”

A building for makers

The new building contains a 180-seat, two-story blackbox performance space, rehearsal spaces, costume and scene design shops, dressing rooms, and spaces for study, offices, and exhibitions. Studios are fitted with lighting grids and ample power for technical classes and to enable experiments with theater technologies. “The new facility gives students access to more industry-standard situations,” Scheib says. “Now when they take our design classes and our tech classes, it will be hands-on and at scale.”

MIT’s maker culture is also reflected in the building’s sturdy, serviceable materials, which convey a nothing-is-precious character that is conducive to experimenting. Sacrificial floors and layers of plywood on the walls can be peeled away with wear and tear.

The space also speaks to the Theater Arts faculty’s priorities and vision for the program. “There’s a distinct performance philosophy behind this building’s flexibility,” says Scheib, who is known for integrating design and performance. “I tend to believe that all the elements in a performance need to operate as equals. Choreography, spoken text, music, scenery — each thing on stage needs to be as important as the performer in order to create a complete image or experience.”

For instance, rather than an enclosed technical booth, there is a gallery above the stage, which puts the crew in the same space with the main action. Brown observes, “That reflects our approach to theater. We don’t want the technicians tucked away; to adequately run sound, you have to hear it live.”

Kohler, who will direct the inaugural production in W97 — a performance of Branden Jacobs-Jenkins’ “Everybody,” based on the medieval morality play “Everyman” — says the new building’s flexible space is essential, given the theater faculty’s adventurous and diverse approaches to performance. “The space is multipurpose because we encompass many kinds of theater ideas.”

While affording students greater access to space and equipment, W97 will also enable more collaborations and professional engagements. With a generous endowment from alumna Nancy Lukitsh that supports visiting theater artists and productions, MIT can now invite leading theater figures to campus to share their works and teach master classes.

MIT’s own theater faculty will also be able to develop more of their works on campus, involving MIT students in the process. The flexible facility allows for more theater research focused on experimental work, as well as providing the campus with new space for debates, exhibitions, conferences, and installations.

Beyond even these many new capacities, W97 is something more. The building is a manifestation of the MIT theater community’s belief in a large and animating idea that they call the continuous studio — a studio that supports the full spectrum of theater experience including theory, experimentation, innovation, and a sustained, creative practice. As Kohler puts it, “Beyond being a space where we can teach, experiment, and produce, this new building has given us a home for an idea — an idea of what theater can be.”

Senior Lecturer Ken Urban speaks with HuffPost reporter Michael Levin about the burgeoning theater program at MIT. “There is a lot of institutional support for the arts in all of its forms at MIT and I think it’s because that process of being creative and realizing that it’s super-important for engineers,” says Urban.

The world as we think the world should be