Metal-free MRI contrast agent could be safer for some patients 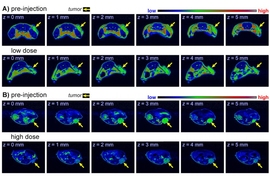 ↓ Download Image
Caption: Researchers have developed a metal-free contrast agent for MRI scans, which could be safer for certain patients.

Caption:
Researchers have developed a metal-free contrast agent for MRI scans, which could be safer for certain patients.

To enhance the visibility of organs as they are scanned with magnetic resonance imaging (MRI), patients are usually injected with a compound known as a contrast agent before going into the scanner. The most commonly used MRI contrast agents are based on the metal gadolinium; however, these metal compounds can be harmful for young children or people with kidney problems.

Researchers from MIT and the University of Nebraska have now developed a metal-free contrast agent that could be safer to use in those high-risk groups. Instead of metal, this compound contains organic molecules called nitroxides.

Furthermore, the new agent could be used to generate more informative MRI scans of tumors because it can accumulate at a tumor site for many hours without causing harm.

“This is an entirely organic, metal-free MRI contrast agent that would allow cancer researchers to start to think about how to image tumors in a dynamic way over long periods of time,” says Jeremiah Johnson, the Firmenich Career Development Associate Professor of Chemistry at MIT.

MRI scans often rely on contrast agents that interact with water, influencing how the water molecules respond to a magnetic field. Contrast agents that exert a strong effect are said to have high “relaxivity,” which enhances the visual contrast between the target organ and surrounding tissue.

Most MRI contrast agents are based on gadolinium, which has very high relaxivity. These agents are usually excreted by the kidneys within about half an hour, so they can’t be used in people with certain types of kidney problems because the gadolinium will build up and exacerbate the kidney damage. Some agents are also considered potentially unsafe to use in babies.

“Gadolinium agents are by far the most commonly used, clinically,” Jasanoff says. “However, people do have some safety concerns about them, despite their wide use. There has been interest in going to non-gadolinium-containing contrast agents.”

Less often used are contrast agents made from iron oxide nanoparticles, which are considered somewhat safer because the body already contains iron. But some of these have also generated safety concerns recently.

As a possible alternative, scientists have tried developing nonmetal agents such as organic radicals, which are organic compounds that have unpaired electrons. However, these compounds tend to be very unstable, so they are usually broken down in the bloodstream within minutes. Also, these molecules generally have only one unpaired electron, so they don’t produce as much MRI contrast as metal agents.

In a study published in 2014, Johnson and his colleagues tried to improve the relaxivity of nitroxide radicals by assembling them into a structure known as a bottle brush polymer. This improved their stability and relaxivity, but not enough for imaging over long time periods, which is often necessary in cancer imaging. In the new paper, the researchers loaded the nitroxide molecules into a different type of polymer structure known as a brush-arm star polymer (BASP). This structure consists of many polymer chains arranged so that the spherical particle has a hydrophilic (water-attracting) core surrounded by hydrophobic (water-repelling) shell.

The researchers found that creating a high density of nitroxide molecules at the interface between the shell and core of the nanoparticles greatly increased the MRI relaxivity of the overall particle, to a level similar to that of metal-based agents.

Johnson says that these particles could be designed to carry drugs as well as an MRI contrast agent, which would allow for long-term imaging of a tumor to monitor whether the drug is shrinking it. He is also working with researchers at MIT’s Koch Institute for Integrative Cancer Research to attach the contrast agent particles to antibodies that would help them to target specific cells for imaging and possibly drug delivery.

Another possibility is attaching the contrast agent to immune cells engineered to attack a patient’s tumor, allowing the cells to be tracked inside the body. “We’re trying to make particles that we can dock on cells and then watch the cells move in vivo,” Johnson says.

His lab is also working on improved versions of the contrast agent which have an even higher density of nitroxide, thus improving their relaxivity and enhancing the MRI contrast even more.

The research was funded by the National of Biomedical Imaging and Bioengineering, the National Science Foundation, a Wellcome-Trust MIT Postdoctoral Fellowship, and the Koch Institute Support (core) Grant from the National Cancer Institute.