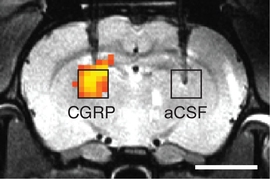 ↓ Download Image
Caption: MIT researchers have designed protein-based sensors that can dilate blood vessels in the brain. This dilation can be imaged with magnetic resonance imaging (MRI), as seen on the left side of this scan.

Caption:
MIT researchers have designed protein-based sensors that can dilate blood vessels in the brain. This dilation can be imaged with magnetic resonance imaging (MRI), as seen on the left side of this scan.
Credits:
Image: Alan Jasanoff

Scientists hoping to get a glimpse of molecules that control brain activity have devised a new probe that allows them to image these molecules without using any chemical or radioactive labels.

Currently the gold standard approach to imaging molecules in the brain is to tag them with radioactive probes. However, these probes offer low resolution and they can’t easily be used to watch dynamic events, says Alan Jasanoff, an MIT professor of biological engineering and brain and cognitive sciences.

Jasanoff and his colleagues have developed new sensors consisting of proteins designed to detect a particular target, which causes them to dilate blood vessels in the immediate area. This produces a change in blood flow that can be imaged with magnetic resonance imaging (MRI) or other imaging techniques.

“This is an idea that enables us to detect molecules that are in the brain at biologically low levels, and to do that with these imaging agents or contrast agents that can ultimately be used in humans,” Jasanoff says. “We can also turn them on and off, and that’s really key to trying to detect dynamic processes in the brain.”

In a paper appearing in the Dec. 2 issue of Nature Communications, Jasanoff and his colleagues used these probes to detect enzymes called proteases, but their ultimate goal is to use them to monitor the activity of neurotransmitters, which act as chemical messengers between brain cells.

To make their probes, the researchers modified a naturally occurring peptide called calcitonin gene-related peptide (CGRP), which is active primarily during migraines or inflammation. The researchers engineered the peptides so that they are trapped within a protein cage that keeps them from interacting with blood vessels. When the peptides encounter proteases in the brain, the proteases cut the cages open and the CGRP causes nearby blood vessels to dilate. Imaging this dilation with MRI allows the researchers to determine where the proteases were detected.

“These are molecules that aren’t visualized directly, but instead produce changes in the body that can then be visualized very effectively by imaging,” Jasanoff says.

Proteases are sometimes used as biomarkers to diagnose diseases such as cancer and Alzheimer’s disease. However, Jasanoff’s lab used them in this study mainly to demonstrate the validity their approach. Now, they are working on adapting these imaging agents to monitor neurotransmitters, such as dopamine and serotonin, that are critical to cognition and processing emotions.

To do that, the researchers plan to modify the cages surrounding the CGRP so that they can be removed by interaction with a particular neurotransmitter.

“What we want to be able to do is detect levels of neurotransmitter that are 100-fold lower than what we’ve seen so far. We also want to be able to use far less of these molecular imaging agents in organisms. That’s one of the key hurdles to trying to bring this approach into people,” Jasanoff says.

Jeff Bulte, a professor of radiology and radiological science at the Johns Hopkins School of Medicine, described the technique as “original and innovative,” while adding that its safety and long-term physiological effects will require more study.

“It’s interesting that they have designed a reporter without using any kind of metal probe or contrast agent,” says Bulte, who was not involved in the research. “An MRI reporter that works really well is the holy grail in the field of molecular and cellular imaging.”

Another possible application for this type of imaging is to engineer cells so that the gene for CGRP is turned on at the same time that a gene of interest is turned on. That way, scientists could use the CGRP-induced changes in blood flow to track which cells are expressing the target gene, which could help them determine the roles of those cells and genes in different behaviors. Jasanoff’s team demonstrated the feasibility of this approach by showing that implanted cells expressing CGRP could be recognized by imaging.

“Many behaviors involve turning on genes, and you could use this kind of approach to measure where and when the genes are turned on in different parts of the brain,” Jasanoff says.

His lab is also working on ways to deliver the peptides without injecting them, which would require finding a way to get them to pass through the blood-brain barrier. This barrier separates the brain from circulating blood and prevents large molecules from entering the brain.

The research was funded by the National Institutes of Health BRAIN Initiative, the MIT Simons Center for the Social Brain, and fellowships from the Boehringer Ingelheim Fonds and the Friends of the McGovern Institute.