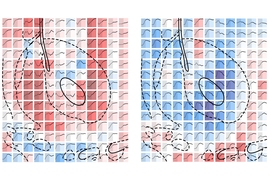 ↓ Download Image
Caption: Molecular fMRI data showing signal changes from serotonin sensors in the absence (left) and presence (right) of the antidepressant Prozac, with each square denoting an individual brain voxel. Red squares indicate the signal has increased, as more serotonin is absorbed into neurons; blue squares indicate the signal has decreased, as less serotonin is absorbed into neurons. Dotted and solid lines graphed in each square show how the signal changes over time. The swirling black lines indicate features of the brain. A computer model uses this data to estimate neurotransmitter reuptake across the brain.

Caption:
Molecular fMRI data showing signal changes from serotonin sensors in the absence (left) and presence (right) of the antidepressant Prozac, with each square denoting an individual brain voxel. Red squares indicate the signal has increased, as more serotonin is absorbed into neurons; blue squares indicate the signal has decreased, as less serotonin is absorbed into neurons. Dotted and solid lines graphed in each square show how the signal changes over time. The swirling black lines indicate features of the brain. A computer model uses this data to estimate neurotransmitter reuptake across the brain.
Credits:
Courtesy of the researchers

Serotonin is a neurotransmitter that’s partly responsible for feelings of happiness and for mood regulation in humans. This makes it a common target for antidepressants, which block serotonin from being reabsorbed by neurons after it has dispatched its signal, so more of it stays floating around the brain.

Now MIT researchers have developed an imaging technique that, for the first time, enables three-dimensional mapping of serotonin as it’s reabsorbed into neurons, across multiple regions of the living brain. This technique, the researchers say, gives an unprecedented view of serotonin dynamics, and could be a powerful tool for the research and development of antidepressants.

“Until now, it was not possible to look at how neurotransmitters are transported into cells across large regions of the brain,” says Aviad Hai, a postdoc in the Department of Biological Engineering and first author of a paper describing the technique in today’s issue of Neuron. “It’s the first time you can see the inhibitors of serotonin reuptake, like antidepressants, working in different parts of the brain, and you can use this information to analyze all sorts of antidepressant drugs, discover new ones, and see how those drugs affect the serotonin system across the brain.”

The paper’s other authors are Alan Jasanoff, a professor of biological engineering; and three other researchers in Jasanoff’s lab: Lili X. Cai, Taekwan Lee, and Victor S. Lelyveld.

Many antidepressants that target serotonin work by blocking serotonin transporters that reabsorb the neurotransmitter into a neuron, so it can be reused after it has sent a chemical signal. Aptly called “selective serotonin reuptake inhibitors” (SSRIs), these drugs increase levels of serotonin in the brain, alleviating feelings of anxiety and depression caused by low levels of the neurotransmitter.

Researchers most commonly study the effect of antidepressants using a technique known as microdialysis, in which they insert a probe into the brain to take tiny chemical samples from the tissue. But this method is time-consuming and limited in scope, as it allows them to study only a single location at a time.

For the new imaging technique, the researchers engineered a protein to act as a sensor that latches onto serotonin and detaches at the moment of reuptake. The sensor is injected, along with serotonin, and emits a signal that can be read by functional magnetic resonance imaging (fMRI). The trick is that the sensor remains off — emitting a low signal — when bound to serotonin, and turns on — creating a much brighter signal — when serotonin is removed.

In the new system, a mathematical model uses the fMRI signal data to construct a 3-D map that consists of more than 1,000 voxels (pixels in three dimensions), with each voxel representing a single point of measurement of serotonin reuptake. Based on the signal strength at each point, the model calculates the amount of serotonin that gets absorbed, in the presence and absence of SSRIs.

“Basically, what we’ve seen in this work is a method for measuring how much of a neurotransmitter is being [absorbed], and how that amount, or rate, is affected by different drugs … in a highly parallel fashion across much of the brain,” Jasanoff says. That information could be very valuable for testing drug efficacy, he says.

To validate the sensor, the researchers successfully measured the expected effect of the SSRI fluoxetine, commonly called Prozac, on serotonin transporters in six subregions of a brain area known as the basal ganglia. These subregions are thought to play a role in motivation, reward, cognition, learning, emotion, and other functions and behaviors.

In doing so, the researchers simultaneously recorded a stronger decrease of serotonin reuptake in response to Prozac among three of the subregions, while noting a very weak response in one other region. These results were, more or less, anticipated, Jasanoff says. “But now we’re able to map that effect in three dimensions, across brain regions,” he says, which could lead to advances in studying the effects of drugs on specific parts of the brain.

This experiment provides further proof of a strong interplay between the serotonin and dopamine systems, and indicates that antidepressants may be less effective when targeting just one of the two neurotransmitters, Hai says. “It may not be sufficient to just block serotonin reuptake, because there’s another system — dopamine — that plays a role in serotonin transport as well,” he says. “It’s almost proof that when you use antidepressants that … target both systems, it could be more effective.”

Next steps for the researchers are to explore different regions of the brain with this sensor, including the dorsal raphe, which produces most of the brain’s serotonin. They’re also making another nanoparticle-based sensor that is more sensitive than one used for this study.

“The ability to simultaneously measure serotonin clearance across a broad cross-section of brain regions is an important, and complimentary, addition to the existing tool belt of approaches used to measure serotonin release and clearance kinetics in vivo,” says Lynette Daws, a professor of physiology at the University of Texas Health Science Center. “The application of fMRI to measure these processes affords temporal and spatial resolution not previously possible, and opens new vistas for analyzing drug action on serotonin neurochemistry in living animals.”

The research was funded by the National Institutes of Health, as well as fellowships from the Edmond and Lily Safra Center for Brain Sciences at the Hebrew University of Jerusalem, and the European Molecular Biology Organization.